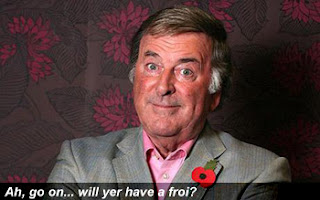 I had cause to be in Windsor a few weeks ago (full frontal family assault on Legoland) and, being rather partial to a cheap Italian (I just cannot afford Monica Bellucci; lovely girl but too high maintenance), the family and I repaired to the local Bella Italia to enjoy a late evening, post Legogasm, meal.

Nothing unusual in that; the brood and I often fine-dine in such kid family establishments and have been known to sample their various incarnations up and down the country.

This time though we were in especial company.

I’m not a huge follower of Sir Terry Wogan but I know enough to have chuckled at his less than charitable (but wholly accurate) verbal drubbings meted out to various Eurovision entrants over the years and I believe he had a TV chat show a few years back and may also be relatively familiar with radio broadcasting. So the opportunity to dine with Tel (as he insisted I call him purely by raising an eyebrow my way) was something that I just could not pass up. And his wife (at least I assumed it was his wife) did not seem to mind us inserting ourselves into proceedings and, in fact, carried on eating as if nothing untoward had happened at all. Looking back on it now I wonder if she did actually see us.

And Terry too for that matter. Conversation was rather sparse - unusually so for the normally silken voiced retired BBC star.

Of course, that may have had something to do with the fact we were sat at entirely different tables but you can’t let a simple thing like an uncooperative seating plan spoil a good anecdote.

Technically I have eaten a meal with Mr Terry Wogan.

And I can tell you he had the best seat in the house – window seat, overlooking the façade of Windsor Castle – seemed to be on good terms with all the waitresses and had the biggest ice cream sundae I have ever seen in my entire life. Lord knows we’re not fast eaters but the Wogans were still masticating and quaffing long after we had requested the bill. Our Tel must have the appetite of an ice age glacier and the constitution of Pete Doherty.

Anyway, I resisted the negligible urge to inveigle him in conversation just for the chance of a kind word and an autograph… I was with my family and needed a night off. If he wants a signed photo he’ll just have to approach my agent like everybody else.

Could you tell? is it a wig he wears?

Libby: can neither confirm nor deny but he has a very hooked nose when seen in profile.

He's a sweetie
Funny
And self effacing

John: and he's plainly a pudding man, to boot.

Badoom-tish. You're here all week! (and I didn't even see the end coming).

Being Me: try the veal!

I'm glad you didn't approach him like a starstruck ninny and run the risk of him making a quip about your beard. It's better not to risk your dignity in these situations.

Gorilla Bananas: I also felt that quips about my beard might have led to some unwanted sexual tension.

Seems quite rude to me that he didn't offer to swap tables. I would have.

Nota Bene: I did point to the wife and jangle the car keys suggestively but he didn't seem to be up for it.

Is he related to Mrs Brown?

You should have sent the kids over to do the deed, make the connection.

Why else have them if you can't exploit them to service your own plans ?

The Victorians had it bang to rights in that respect. If you ask me.

I'm jealous. I'd love to have shared a meal with my hero.

It'd be really nice to meet Terry Wogan too.

Keith: I did think of that... but kids and ex BBC employees is dicey ground at the moment.

Rol: are you asking me out on a lunch date?

They say you should never meet your idols.

Rol: dammit, then we are destined never to meet!

Ha ha. That made me laugh.

Keith: unlike the bill.