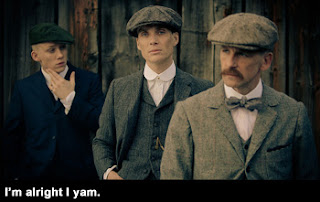 It's rare that Birmingham - capital of the UK Midlands - gets to feature in any kind of television drama. Most of the time film crews avail themselves of the city because it is undoubtedly cheaper to film there than the nation's capital and then represent it as actually being London. The BBC's Hustle is a case in point. Most of the exterior city shots were filmed in Birmingham but sold to the world as being London.

So it's rather satisfying to see Birmingham featuring in a BBC costume drama and being sold as itself. Noisy, grimy, rough, tough and with that unmistakable Midland's twang that I grew up with. Not that Leamington Spa has much of an accent. Compared to the true son of Birmingham, the Leamingtonian accent is rather poesh and nice (as opposed to "push" and "noice").

Peaky Blinders kicked off last week and is the fictionalized account of the Shelby's, a gang of Birmingham crims who held sway in the city just after the finish of the first World War. I daresay the writer's have taken numerous liberties but I am not in a position to point out any factual inaccuracies as yet; I'll leave that to the numerous "Brum" academics who'll not be shy in voicing their complaints as and when any Birmingham based misinformation hits the slagheap.

Knowing parts of Birmingham well and others not at all I can at least say that there is a clever mix of real location and CGI that brings 1920's Birmingham to life; not to mention heavy use of the canal yard at The Black Country Museum. The accents, for those of is the know, sometimes veer from the true Birmingham "yam", but on the whole hold true. The actor with the toughest accent to crack is Sam Neil as Chief Inspector Campbell who has nailed his oracular flag to the mast of the Reverend Ian Paisley. Sometimes it jars but the script is cracking enough that you overlook the occasional dip into Walt Disney Oirish.

The star of the show is Cillian Murphy as Thomas Shelby (or Tommoi as he is referred to in our house), the leader of the Shelbys. The Peaky Blinders were so named for the razorblades they concealed in the peaks of their cloth caps that were then transformed into slashing weapons in a fight... but in truth Cillian Murphy could cut a man wide open with his cheekbones alone. He's a powerful presence on the screen and exudes an air of calm, urbane, gentlemanly violence that is somehow the more brutal for being measured and calculated. Helen McCrory too is a strong backbone to the rest of the cast and manages to slum her vowels into Birmingham's street talk with aplomb.

The show has everything; horses and bet rigging, stolen army munitions, pub fights, gypsy warfare, blood, sex, cheekbones and exortations not to "larf at moi bruvva." And best of all it is bigging up Birmingham.

The city up the road from me has a history that is just as magnificent and nasty as the one to the south.

Only our accent is better.

If yow can't get a rowm at the Premi-air Inn then jus' yow tyoon in to the Beebeeceee of a Thursdaaay and it's like yow is proppa in the Bullrinnng. Jus' down't look at us funnoi. Cos we down't loik it.

Hah, I assume it must be a comedy with everyone speaking in those accents. How can anyone keep a straight face in Birmingham?

Well Steve, as a Leamington girl married to a Brummie I do have to comment on a few things here.....yes it is good to see the 2nd City getting some light but this series was filmed in the north ...Leeds maybe...and none of the Brummies I love and know sound like the Black Country people you are writing about.....there is a great deal of difference between 'yammers' - Black Country folk - and Brummies and nobody I know sounds remotely like anyone in this programme...the show is indeed great to watch ..I suspect because it is beautifully shot and very stylised, with each still being a thing of beauty....perhaps more style than substance though....and I think Sam Neil is great...although I do keep walking around saying Nigh instead of now because of him!

Well, I can't comment on the authenticity of any of the accents because a)I've never been to Birmingham - the nearest I've ever got was when I used to watch 'Pebble Mill at One' but I don't wish that to be public knowledge and b)I'm Scottish so everyone south of Berwick(upon-Tweed)sounds the same to me (just kidding!). Anyhoo, I like the programme but am a bit mystified as to why they are playing modern-sounding music as the soundtrack?

Nana Go-Go: the Midlands' music scene has always been way ahead of its time. Just look at Shawaddywaddy.

What would I know about the accuracy of your many dialects? So I can't comment. But it sounds like another British show I might have trouble understanding.

As an aside, we've been watching Swansea Market... I cannot catch more than three words out of every five minutes of dialogue! Holy heck, I don't remember having that much trouble when we were actually in Wales but I am befuddled by it now.

I must look it up forthwith! A series set in Birmingham - how very novel.

Looking forward to seeing this on iPlayer...looks brilliant...and thanks for the encouragement

Being Me: the Welsh accent can be quite impenetrable. We used to go camping on a Welsh farm and my dealings with the farmer were 90% guesswork on my part and 10% polite scorn on his.

Laura: indeed. It's a step up from Brum.

Nota Bene: it's proper cracking in my humble opinion.