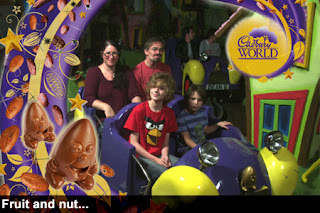 So having taken the kids to Cadbury World and finding myself channelling a couple of comedy legends (a weird hybrid of Jim Carrey and Eric Morecambe) I thought it would be simply hilarious to pull a face on one of the rides that you simply have to go on while you're there.

No. You really do have to go on them. There is no way to get from one part of the factory to the other except by bizarre toyland tram-car through the disturbing dimensional rift that is Chuckleville.

Being an old hand at Cadbury World I knew there was a camera positioned halfway through the route that takes candid snaps of interlopers as they crawl their way through the alien landscape of chocolate bean land that you then feel morally obliged to buy and hide away in the loft (kidding yourself that this is the only copy and the good people of Cadbury World burn all the negatives).

Wouldn't it be a jolly jape, I thought, if I was gurning like a good 'un at the moment the flash went off and oh how we'd laugh when it came time to pick up the photos?

It having been a number of years since I last played the Comedy Club I was missing the uplifting shot in the arm that is reactive laughter so I thought, what the hell, I'd go for it. It might even cheer up some of the Cadbury staff who looked like they'd been injecting chocolate like a cheap form of botox.

We went on the Chockie Bean public transport system. The camera flash went off. The picture was taken. And we went to collect our photo.

Nothing. Na-da. Not a titter.

"Hmm," I thought to myself, "Either the good staff at Cadbury World are one paracetamol away from suicide or I'm losing me touch."

I'd pulled my best blimmy and put my glasses on upside down and everything. That should have had them rolling in the aisles.

Instead there was not a dickie-bird.

When I got the photo back I could see why.

There was utterly no effing difference in my appearance from when I look "normal" to when I was pulling the face that Jim Carrey would have paid good money to be born with.

I looked exactly the same.

I'm not quite sure what that says about me but I have no doubt at all you'll all be queuing up to tell me.

I was struck by the way you look like my old organ teacher (30 years ago) who now looks like this. You have to imagine.
http://www.bristol.ac.uk/school-of-arts/people/glyn-g-jenkins/index.html

The fly in the web: I wish I had your forbearance.

Can you cope if I mention what a nice looking family you are? (I arrived home this afternoon - or was that yesterday afternoon - so I still think I'm in English daytime and have to do something with wakeful nightime... like catching up on my bloglist :-)

Lady Mondegreen's Secret Garden: that's very kind of you, thank you - and so lovely to meet you too. Glad to hear you've arrived home safely!

How touching that you thought you could make yourself look like anything other than a beardie in specs. There must be many little boys who dream of looking like their transformer toys. Ever thought of posing as a beardie in drag?- that's always good for a laugh.

Gorilla Bananas: to be honest there's very little I wouldn't do for money. Or chocolate.

There's a lot of hair in your family!lol What a lovely lot you look. Very nice pic. x

Very close to yours methinks

John: there's not a big call for dignity in Chuckleville...

I'm loving the family pic too. Not sure I could manage Cadbury World - all that chocolate. Bleurgh. Vix x

Thumbs up for the fine family snap, although you really should've been caught gorging on some heavy chocolate comestibles for some messy photo action...

I'm getting a decidedly Willie Wonka feel from this.

Löst Jimmy: next time I'm going to mug one of the Chockie Bean people. That'll get a reaction!

Kellie: I could be Mike Teavee!

Yes, you do just look pleased with yourself...had you snaffled all the chocolate?

I think the robot is photobombing you, he is also giving you the finger!

Next time it has to be pants down, full moon.

Joe: damn right - and I'll produce a chocolate bar of my own!

I doubt even Heston himself could make that much chocolate and cheese sit well together.

Keith: yes, I'm the one at the front with the blond hair.

They're way too expensive to waste on face pulling anyway! Nice piccie.

Laura: see, even when I'm going for "idiot gross" all I produce is "nice"!