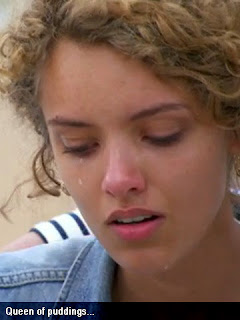 The recent series of The Great British Bake Off has stirred up a lot of online debate and astoundingly none of it has been about buns, baps or crusty cobs. It has instead been about crying. About tears. About the expression of emotion.

I’ve read a number of blogs recently that have given Ruby, this year’s youngest Bake Off contestant, a hard time. She has come under fire for crying too much, for crying at the slightest little thing, for ‘crying to gain sympathy’. In short she has been accused of utilizing her tears as some kind of Machiavellian tactic to gain advantage over the other contestants.

Now, aside from the fact that she has gained no advantage at all and indeed I fail to see what actual advantage there is to gain, I find the accusations deeply disturbing, repugnant and unfair. Some of the comments I have seen directed Ruby’s way included the old gem, “oh she’s just putting it on; I knew girls like her at school – very pretty and they turn on the tears just to get their own way; they know exactly what they are doing.”

It took me a while to work out why that statement angered me so much – because there are a number of reasons.

The first (and major) is that the initial gut reaction of both my wife and I when we first saw Ruby was along the lines of: this person has had something happen to her which has left her a little bit damaged. We didn’t see someone who was deliberately manipulative or turning on the tears just for effect; we saw someone who was plainly fragile, had major self-esteem problems despite her looks (because, let’s acknowledge something here: just because you’re perceived as good looking by other people doesn’t mean you believe it yourself) and was severely lacking in confidence and a sense of self-worth.

I’m sure it will be argued that I am merely transferring my own experiences and (mis)conceptions onto Ruby. I would argue that people accusing her of being manipulative are doing the same. To dismiss her with the phrase “I have known girls like her…” is offensive, lazy, callous and reductive. Have you really known girls like Ruby? Isn’t everyone an individual? How can you judge someone who appears on a highly edited TV programme – someone you have never seen before – and decide you know them well enough to critique their entire personality? And as for these girls that you “knew”… how well did you really know them? Enough to judge their behaviour and condemn them for it out of hand? What if there were issues at home? What if there were traumas? Or did you really know everything about them to be able to say they had no reason at all for their behaviour except an inherent and apparently unjustifiable nastiness?

The other thing that bugged me was the implication that other people’s tears and ‘confidence wobbles’ on the show were genuine while Ruby’s were not. How the hell can anybody make a judgement call like that? As far as I could discern this judgement was based solely on Ruby’s looks. Ruby is very attractive therefore she must be supremely confident, must have an easy life with no trauma ever taking place and is not allowed to be attributed with any nervousness, lack of confidence or feelings of self-doubt and emotional negativity. People who are more plain looking, however, well when they cry and go through a confidence crisis that must be genuine because everyone knows that attractiveness = manipulativeness while plainness = honesty and integrity.

You cannot allow that one person is genuinely upset and not another. There is a basic human right issue here that has nothing to do with looks, gut instinct or whether or not you find someone’s personality appealing or not. Human emotional responses are impossibly complex. Nobody can read them well enough to say exactly what someone is feeling let alone instantly dismiss them as being OTT or inappropriate. For Christ’s sake, if you feel something you feel it. It is not for others to deny you the rights to your own emotions or charge you with fraudulent behaviour. Imagine how crippling that is: you feel something strongly enough to make you cry but those around you shrug and say, “Nah, you’re faking it.” How do you feel now?

The last thing that piqued a response from me was the debate about whether there were too many crying people on TV per se. Whether there was an emerging crying culture generally that was, if not fake, then at least over-done and distasteful to those of us who battle on with stiff upper lips. Is all this free-wheeling emotion a good thing or a bad thing? Part of the argument again was based on the idea that people use tears as a means to an end; a moral gambit to win (or even just avoid) an argument.

I’m not sure what the answer is here except that I would rather a world where people were open and honest about their feelings than a world where people bottled things up, battled on until they either popped and took out half the street in a killing spree or popped internally and fell to the big C or heart disease. Surely the real issue here lies with how people deal with the tears and upset of other people? Isn’t a sighing, dismissive, disgruntled response (“Oh God, they’re not crying, are they?”) also an emotional response that is just as open to criticism?

Surely there is an analogy here to dealing with crying children? Certainly you don’t want to give in and give them whatever it is they want just to stop / avoid the tears… but you do need to talk to them because there is plainly an issue. They might not get what they want but, in the words of Mick Jagger, they might get what they need. At the end of the day we are all emotional beings to one degree or another – our place on the spectrum isn’t the benchmark. I don’t believe there is a norm and I don’t think a norm should be proscribed.

Dismissing, castigating, denigrating and vilifying someone just because of how they express their feelings is not the way forward.

And that is something I feel most sincerely.

Well said - can't really add much to that. So off to play Cry me a river on my sax...

I have thought long and hard about the bake off...and I feel I want to take the producers to task somewhat
It is they not ruby that have manipulated the audience ....by clever cutting, cross cutting and interviewing.... Ruby was seen as simpering, Kimberly was seen as a little too hard and confident etc...... I should have realised as last year they made Brendan out to be the villain of the piece....

It's all about ratings

John: I have no doubt you are right. Did you see the pre-Bake Off show last night? They went back and spoke to the contestants from the previous year... the camaraderie was plain but, of course, during the actual run of the show it was made to seem highly competitive and fraught. I don't doubt the same went on this year. Fine. They are making a TV show... but the contestants are real people with real feelings and lives outside of the show. However, I do think us viewers should be intelligent enough and discerning enough to acknowledge that, actually, the camera can and does lie in the hands of a clever director.

Any man who reacted adversely to Ruby's tears has either given up on women or realises that she's way out of his league. There must be a fellow somewhere who wanted to offer her a clean hankie and his shoulder to cry on. Where is Hugh Grant when you need him?

Gorilla Bananas: probably crying in a corner himself over his flagging acting career.

She certainly lacked confidence didn't she? Quite emotional. Poor girl.

Nota Bene: or a girl who is in touch with her emotions and so quite lucky?

Try working in the university system for 16 years. You will soon see that it is not just the telly. Emotional manipulation is rife nowadays. And whilst it may not work on me, there are plenty it does work on.
I think the level of public debate about this proves that there is something in it.
But yes, it is a bit unfair that poor Bake-Off Ruby has borne the brunt of this outrage outage. She is merely a symptom of a wider phenomenon.
I have no problem with expressing my emotions for the record. Or being exposed to other peoples' As long as we're all being genuine and no one is emoting for effect or other dubious reasons.

Laura: can't disagree with what you say and, for the record, your blog was about the only one I read who tackled the "crying debate" with any intelligence or sense.

Thanks Steve. I think John Gray is also right about programme makers deliberately cutting the show to distort things as well and make people seem even more competitive or nutty than they actually are.
The time is coming for 'reality' TV to be renamed maybe.

Laura: or time for reality programmes to actually be "real" maybe? Or maybe we "just can't handle the truth"?!

A very insightful post, Steve, together with some very valid comments from other readers.

Notwithstanding the debate about Ruby, it staggers me that people can be so adamant about who should win a baking competition when they haven't, as far as I know, actually tasted the results.

Trish: and doesn't that just sum the whole thing up? When does a baking competition become a personality competition? When you shove it on mainstream TV.