Do Not Lend These People Your Ears 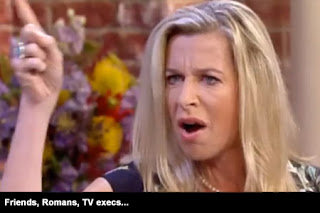 I managed to navigate most of 2013 without once having my existence bent out of true by the verbal crowbar that is Katie Hopkins. Sure I knew who she was, could surmise what it was she was working so hard to be and what she was aiming to become but she was as a gnat on the giant arse that is UK reality TV. And I make it my business to have as little to do with that particular arse as is humanly possible.

And yet, come the end of the year, with every web site, newspaper and chav mag producing a 12 month retrospective, Katie Hopkins is leaping out at me from photos, from sound-bites and no doubt from tomorrow’s fish and chip wrappings too.

The latter moniker – rent-a-gob – I’ve seen in more than one publication. If I were her I’d copyright it right now; she seems the kind of girl who’d be up for making a fast buck.

My initial response was probably akin to that of many people: revulsion, a knee-jerk reaction to dismiss her as just another transient sneery mouthed reprobate. The shrew equivalent of a one hit wonder in the Gallup pop chart. Someone mad enough (and hard hearted enough) to make some money out of being universally disliked and then forgotten about.

But then it hit me that the most revolting thing about this kind of media event isn’t the poor hapless individual at the eye of the storm but the storm makers themselves. The thunder and lightning of the newspapers and TV execs who book her on their shows and shovel the excrement that falls out of her mouth into their column inches. The howling wind of the glossy mag editors who deliberately provoke her with irresistible punch-line issues and un-PC bandwagons that she can’t stop herself from jumping upon. And worst of all the all-pervading insipid rain of the general public that read and watch and Tweet and Poke and Klout about all the immaterial, unimportant nonsense that Katie coughs up just so she can watch us splutter and retch in joyous outrage and thus feel justified in doing it all again and again and again (and then smugly listen to the chink of cold coins falling hollowly into her deep, deep, soulless pockets).

I feel sorry for her.

She plainly craves recognition. Craves “fame”. Wants people to know her name, to know her by sight.

But it’s a bit like accepting the job of village idiot just because you can’t bear to be anonymous.

I daresay she’ll make a killing. I don’t know what the going rate is for appearing on a TV chat show these days but I bet it’s easier money than a real job. There’s already talk of her being on the next series of Big Brother. I’m sure they’ll make it worth her while just as she’ll make it worth their money. And then there’ll be the inevitable fall from grace. Then the carefully planned radio silence. And then the abashed, contrite, redemptive return. The cathartic outpouring of all her issues and how horrible it was to be so universally reviled. There’ll be a book deal on that particular horizon. Maybe even a regular appearance on kid’s telly or a TV magazine show with plenty of conscience.

And of course her opinion will be sought and bought on the next poor rent-a-gob that the media people will have temporarily shoehorned into the limelight by this point. Because there’ll always be another one. It's a fast moving queue. Like the role of Master of the Dark Arts in the Harry Potter books, nobody stays in the job for long; it’s cursed:

“So you want to be the next village idiot? Fantastic! We’re the people who can help you do it and we’ll all make a lot of money out of it into the bargain…”

Lord knows I’m more than happy for the village idiot to be reformed and redeemed but do we have to go through the endless pantomime of salacious baiting and vampiric bloodlust first?

Can’t we quieten the great god rent-a-gob once and for all by just choosing not to listen?

Because at the end of the day, who’s the greater idiot? The idiot who shouts or the idiot who drops everything to listen?

Did any of you lot actually hear what I just said…?

Every word! Even on this side of the pond I haven't escaped what you succinctly call the verbal crowbar that is her. I try very hard to ignore reality shows for the most part; and vacuous no talent celebrities with no claim to fame, but it aint easy is it.
( I would put a question mark at the end of that sentence but for some reason it comes out looking like this É. ) ÉÉÉÉ

Clippy Mat: thank you for your kind words... unlike Katie H though, I'm not kidding myself that I'm a spokesperson for anybody other than myself!

Her Wikipedia biography is longer than Alice Roberts', so she must be a woman of substance! Do you think she'd be any good on a wildlife documentary? You don't often get to see a human swearing at wild animals.

Gorilla Bananas: much of her substance has been spread over the tabloid press and the internet; I would suggest much of her Wikipedia page is recycled material. As for her doing a wildlife documentary... you would get to see a rarer sight: wild animals swearing at a human.

The thing I find most annoying is the sheet cynacism of the whole operation. The fact that someone can make a good living just by being a giant pain in the arse, is just wrong.

And which gutter do I have to search in to find her?

Cynical but rightly so. Every time I hear her, I think, 'Is she for real?'

Martin: or move over and give me a job. [Joking.]

The fly in the web: any to be honest. She gets about like C. difficile.

Fran: sadly, I rather suspect she is. And that makes me even more sorry for her.

I have absolutely no idea who Katie Hopkins is?

Though oddly the word verification below is asking for PERSON and PPERSIA maybe that's all I need to know.

The Bike Shed: the word verification is undoubtedly more interesting than she is.

Seems to me that nowadays to qualify as a celebrity you either need to be a major bitch or as stupid as can be, the truly talented need not apply.

As for Katie Hopkins, I rarely click on any article about her now ('cept yours of course), the woman writes for the Sun, FFS, she should be riding around on a Shetland pony not any high horse!

Very Bored in Catalunya: there may be a positive outcome to all this when the day finally dawns that "celebrity" has become a dirty word and a status that people shun.

John: just advising people not to let themselves be part of the production line...

I feel very blessed, because I genuinely have no idea what she said, or did, or tweeted, or whatever it was that has got their knickers so circumnavigated..

And long may I keep it that way.

Even skipped reading the rest of your post in case you let it slip. Sorry.

Keith: see, I knew there was one pure person left in this country.

I've never heard of her, and couldn't be bothered to read what you wrote about her. Have I got that right?

Nota Bene: poor woman. People don't even care enough about her to hear her getting a drubbing.