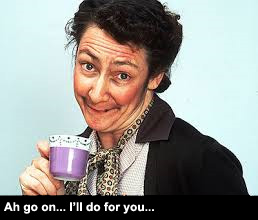 The wife brought it up the other day. Just dropped it into the conversation like a self-cleaning grenade.

I confess I initially recoiled. Who the hell had she killed? This is what comes of waving a handgun around in the back of the car with the safety catch left off. One speed bump and boom. Death by hair trigger and then you have to spend the rest of the day being nice to Harvey Keitel while he picks some dude's brains out of your furry dice. And no, that is not a euphemism for oral pleasure.

Turns out the wife actually meant get a cleaner. A Mrs Overall. A Mrs Doyle.

Someone to come and do for us (though that still sounds a bit Pulp Fiction-esque to me).

The wife's argument is thus: she and I both work full time, when we have any free time we are battling a constant malaise of exhaustion that raising kids prevents you from ever giving in to so you keep pushing and pushing yourself with the end result that your effectiveness as a careerist / parent / homeowner shrivels down into a depressing spiral of endlessly diminishing returns.

Now I'm not saying that our home deserves to feature on a Channel 4 documentary fronted by the spectacularly fronted Jasmine Harman (though she's more than welcome to rifle through my Tallboy any time she likes) but, you know, sometimes things get left. For a few weeks. And I put it to you that having water cress growing out of your draining board is not a look that will entice Nigella Lawson around for an evening meal. And that's even before she negotiates the sometimes tacky floor of the bathroom on her way to powder her nose.

We do our best but our best isn't good enough. Our best certainly isn't up to the 1950's ideal that my Nan and mum embodied when I was growing up. But, of course, looking after the home was and is a full time job in itself (especially when you throw young kids and cats into the mix) and they lived in an age where a woman having a career and going out to work full-time was unusual and, outrageously from the modern perspective, a bit of a talking point. Neither of them worked full-time in the career sense. Though in terms of labouring to maintain a spotlessly clean home they never bloody stopped.

So. We - Karen and I - are considering hiring a skivvy.

My first reaction was kind of an inverse snobbery borne of my thick overlay of working class ideals and a deep sense of class embarrassment: what the hell would my friends say? What would my mother say? My second reaction was to begrudge the money: are we really going to give away hard earned moolah to someone else so they can come into our home and do the jobs that we would and could do (albeit haphazardly) for free? My third was the English Man defending his castle stance: have some grubby faced dole-ite invading our home, pocketing our loose change and hijacking our wifi when we're not looking?

Was my wife utterly mad?

But as the idea has lain with me and snuggled up softly, gently pushed sugar kisses into my ear and raised its eyebrows suggestively I have started to see the positives.

(a) More free time and energy to do the things we really want to do. (b) A more hygienic, more healthy standard of living that the wife and I, the kids and even the cats would benefit from. (c) Someone who can scrub the bloodstains out of the backseat of the car for a lot less tin than Harvey Keitel asks for.

We shall ask for references naturally and have to think carefully about keeping any kind of monetary temptation out of view. My wife will be at home on the days the cleaner comes round. And my Lego sanctuary... er... "office" will be out of bounds to uninitiated duster-wielding hands.

With those provisos in place, I am slowly coming round to the idea.

Who knew that a slightly grubby lifestyle would lead so effortlessly to upwards mobility?

We had a cleaner in Sheffield
It was at the time I worked 60 hours a week and so did chris
Her name was eba
She was Filipino and she was a godsend.

John: ironing too? Jesus. Why have I been so slow on the uptake?!

Forget about the class thing - I assure you that no cleaning lady will feel downtroddren because you've hired her. The ones from East Asia might have a quiet snigger about your beard, but they won't laugh in your face if that's what your worried about.

I think a cleaner would have saved my marriage!!

Gorilla Bananas: if I was afeared of people laughing at my beard I would have become a hermit years ago and would delight in my accomplishing my own cleaning.

Suburbia: marriage counselling as well as ironing? I can see I've been missing out!

Trish: I have no doubt that you'll scrub up rather nicely; you're hired!

I would have loved to have had a cleaner when in France with that huge house to care for...but by the time you had paid her and then the 50% social contributions on the top it was far too expensive - and there was no way a French cleaner would have consented to put up ladders and scaffolding to hoover the beams. Her insurance would not have covered it.

Here a woman from up the road to mucks us out once a week: I know she has arrived because as she comes in at the front door men and dogs flee out through the back door...

The fly in the web: if your cleaner has a sister who is available once a week please send her my way.

Mu mum had a cleaner when we were old enough that she felt happy to go to work full time. A little geriatric old lady appeared once a week and left copies of Watch Tower in strategically chosen locations. She also cleaned the house, which mitigated this in my mums mind so all was well.

We attempted to get a cleaner ourselves a couple of years ago when the wife took to childminding for around 60n hours a week. Unfortunately she couldn't find a cleaner locally willing to do the hours she wanted. The issue was, locally a cleaner costs approximately twice as much as a childminder gets an hour, so a couple of hours a week is half a days work. We literally couldn't find a single person in the locality willing to do two hours a fortnight. Bonkers.

My lovely Mum used to 'do' for various folk. So a few tips front he other side of the fence.

Don't bother hiding stuff you are embarrassed about. Any cleaner worth their salt will find it within a week.

Don't apartheid your biscuits onto M&S thick chocolate covered good ones for you and saliva blotter budget range for them.

Do tell them how much you couldn't survive without them... every time you see them..

Observe these simple rules and you will live a happy and harmonious existence.

Remember, a cleaner is for life, not just for this mess.

Alex: so it seems I need to go the religious route or the babysitter route...

Damn fine idea. Damn fine! The woman has great sense!
Ever so slightly envious at the thought... I can never justify it, I work from home. The irony being, I don't actually have the time to clean the house the way I'd like, either, as well as balance down-time and family time for sanity's sake, and yet being home all the time actually makes the house messier and dirtier than if we were all out at work most of the time. The big catch-22!

Being Me: I know what you mean; it is a catchy-22. That given, sometimes you've just got to pick a side and jump... at least the side we land on should be cleaner than it was before!

I have a friend who is as left as left can be, but he and his wife have a cleaner...I asked him about it, and he had rationalised it...division of labour...the trouble is you're troubled by old-fashioned views of 'service' rather than a continental view that it's a job to be done and done well

Nota Bene: true. But then I do want them to dress in a proper Maid's uniform and call me "Sir" and the wife "Ma'am". I have a bed prepared for them in the attic too.

If it increases the quality family time you can all spend together when not working, I would say it is worth it.

Laura: and at the end of the day that is all it comes down to.