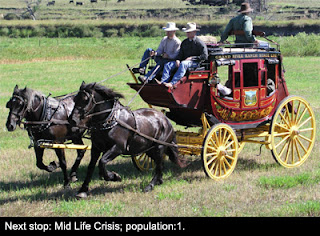 The older I get the more I realize how easy it is to drop the reins of one’s life. To just let them go and allow them to drop to the floor where they can be picked up by absolutely anybody or even nobody at all. Suddenly the stagecoach on which you are riding – the stagecoach which is you – is not heading in the direction you had thought it was or the direction in which you had intended. Worse, you realize you had no real sense of direction at all and now you are looking around wondering where the hell you are. You just know you are not in the place – the vision of Utopia – that you were holding in your mind as your ultimate destination and you have no idea of how to get there.

I’m starting to see that a passive nature often leads to a passive act of self-betrayal.

When I was a kid I had a very definite vision of what I was going to do when I grew up; of what I wanted to be. Initially it was a crimefighter. A superhero. The world can’t have too many of those and fighting evil seemed a perfectly legitimate way to spend one’s time. Note I say “spend one’s time” and not “earn a living”. Receiving monetary recompense for my future acts of derring-do didn’t ever occur to me. My motives were pure. This was just something I wanted to do and my vision was completely unsullied by any transactions of filthy lucre. Dosh wasn’t the important thing. What I wanted to do was.

Such wisdom in one so young.

As I got older I had a Father Christmas moment. That horrible epiphany that you get when you realize something you have long believed in and held dear is, in fact, an abject impossibility and not a little stupid for all its inherent idealism.

Crimefighting wasn’t going to work. Han Solo was unlikely to want to join my crimefighting gang and the government were unlikely to allow me unfettered access to an unlicensed lightsaber even if the science bods had been able to create one.

So I settled on writing. Being an author; a novelist. Through my teens and twenties this was transmuted into poet and now, later, older, it has reverted back to author.

Don’t get me wrong. I do consider myself a writer. I’ve written novels, scripts, articles, poetry, radio plays and joke letters. I suppose I am an author.

But I don’t consider myself to be leading an author’s life. Whatever that is.

When I was younger the vision I had of this author’s life didn’t entail daily battles against exhaustion, futility, frustration, despair, ennui or the many other vagaries of a 9 to 5 job. The vagaries of making a living that get in the way of the life we are trying to lead.

I daresay the life I have now is most definitely a real, genuine author’s life. My teenage vision was well wide of the true mark. That Father Christmas moment is damned necessary if any of us are to engage with reality and function properly as adults.

But I can’t help thinking that my younger, purer, infant vision was infinitely wiser: it is the choice of doing that is the most important thing, not the remuneration and how you achieve it.

Because it is the moment you reach out for that tightly bundled fistful of dollars that you drop the reins and the stagecoach that is you takes a lurch for the worst and, terrifyingly, speeds up.

It is the moment you pocket that cash that you find you have lost your way.

I guess a real writer writes because they are compelled to write. And that is you so keep on truckin!

I am actually gobsmacked at how little even successful authors make. When Hanif Kureishi was scammed of his money he only had $120,000 life savings, okay maybe he spent a lot of his earnings but that doesn't seem that much considering he is in his fifties and has had several books made into films.http://www.theguardian.com/uk/2013/may/03/hanif-kureishi-victim-suspected-fraud

Emma: that's true and a very sobering statistic but maybe proved the real point of this post: money should never be the deciding factor when choosing a dream to follow?

"it is the choice of doing that is the most important thing, not the remuneration and how you achieve it". Clearly you were never cut out to be a banker

I was lucky. I knew what I wanted to do and was able to do it....I just wish I had been able to continue for longer.

Nota Bene: you think the banking crisis was / is bad now? Imagine if I'd been involved...

The fly in the web: better to have loved and lost...

Pocketing cash is as necessary as breathing - those who feed, clothe and house you won't do it for free. All you did was grow up, and your children will be grateful that you did. Bruce Wayne is the example to follow if you want to be a superhero - his pockets were stuffed full of cash!

Gorilla Bananas: that's a damned fine point. Who wants to be a poor Peter Parker when you can be spooning Catwoman in a swanky Gotham City hotel?

You Cisco Kid you.

Marginalia: I got a 6-shooter full of Ajax. I'm gonna clean up this town.

Wise words. I don't get paid for anything I enjoy!

Trish: and because of that society is inherently wrong.