As Unbending As A Reed 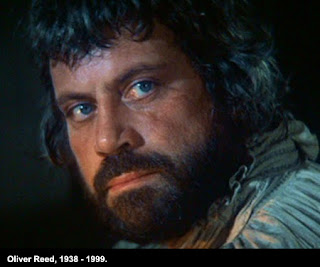 I admit I have bummed out of blogging for the last 12 days. I've had the Easter break off with Karen and the boys and willingly allowed myself to drop some of the balls that I normally juggle in order to throw some others around instead.

I've done some other writing - a secret project that may or may not get published under my name - and I've done some reading. I haven't missed the blogging. That surprises me. I thought I would. At one time it was like heroin. It gave me an initial buzz and then for a long while I had to carry on doing it to feel normal.

It's nice to know that I can feel normal without it. Look, however, is a different matter. So does this mean I'm going to stop blogging? No. And I don't see why that should be a natural conclusion to jump to. It does mean, however, that perhaps I have a more sane approach to the whole blogging platform now. I have lowered my expectations of it enormously and the reward for this is a curious sense of freedom.

But that isn't what I want to write about today; that is just an apology for my recent absence.

One of the books I read over my Easter break was "What Fresh Lunacy Is This?" - the authorized biography of Oliver Reed by Robert Sellers.

I grew up with Oliver Reed's films. It was pretty hard not to as he was a big name in the 60s and 70s. He was undeniably, unmistakably, that rarest of creatures - an actor with true presence; an actor who didn't need to speak to make his presence felt on screen. Whatever John Wayne or Lee Marvin had; Oliver had it too. In spades. Despite his acting world heritage (his grandfather was Sir Herbert Beerbohm Tree) Ollie shunned acting school and all attempts to get him to 'tread the boards'.

He disliked other actors. He disliked intellectuals and he disliked toffs - although, by all accounts, he was an exceedingly clever man and rather well brought up.

He liked pubs. He liked the ordinary man on the street. He liked larks and having fun and encouraging spontaneous 'happenings' to occur. His greatest anathema was boredom.

And his own legend.

It's hard to read an account of Ollie Reed's life without feeling your moral faculties forcibly bending towards the view that he wasted himself. That he destroyed his gifts - his looks, his voice, his potential to have become a huge megastar in Hollywood - that he wasted his entire life by giving it so willingly to the demon drink.

And yet that is to miss the point.

Ollie Reed was that rare thing. He was, despite his many inebriated chat show appearances to the contrary, totally in control of himself. He drank when he wanted to. When he was working he largely didn't. He could drop the booze with no ill effects whatsoever and remain dry for months. When he chose not to, he could drink every man under the table during the evening and then be on set the next day at 6am and will himself into complete sobriety. Every single director reports that he was always on time, always knew his and everybody else's lines, hit every mark and always put in a commanding performance.

Oliver Reed did what he wanted, when he wanted and went where he wanted with who he wanted. He couldn't be pushed or bullied. He had his own views and opinions - and although many of those fast became outdated and outmoded - he chose to stick with them. He chose to ignore the censure of the world and the press and carry on living his life exactly how he wanted to live it. Right up the end. One can't help but feel an admiration for that strength of spirit - because a strength is what it is. To have a complete conviction in oneself in the face of every naysayer on the planet and to always retain it unshaken.

And most important of all, he always knew what he was about; he knew what he was doing and what his choices would lead to. He was always open and honest and fully compos mentis about it all and never denied a damned thing. He never lied to himself. How many of us can ever say that?

Ollie didn't waste a single minute of his life; he merely did what he wished to do rather than what others would have wished him to do. The only people who wasted time were those trying to get him to change his ways.

I'm not saying that the boozing, the carousing, the falling over on TV and the abuse he meted out to some chat show hosts and guests isn't cringe worthy, embarrassing and ultimately, depressingly frustrating. It is. There is genuinely a tragedy to it.

And whether it's a conscious choice or not, whether it can be turned on and off at will, alcoholism is still alcoholism. It exhibits itself in behaviour that is always regretted the day after. It expresses itself in ill health. It is dealt with by society and the press via sanctimonious, morally superior ridicule and an incredible lack of understanding.

All to easy to dismiss the drunk. To write off the alcoholic. To forget that, actually, there is still a fully functioning, living, breathing, feeling, thinking, complete person still in there. Someone who is just as valid as a human being as you or I and still deserving of respect. The drink is not 100% of them. Not even close. The booze is, even at it's fullest manifestation, just a surface.

When Oliver Reed died he was in the process of making Gladiator and was putting in a powerhouse performance. He was largely off the booze. He had quietened down. He was on the brink of an almighty come-back. But fate, hubris, intervened. When a shipload of sailors arrived in Malta the old Ollie - the Ollie who, throughout his life, loved the armed services and loved testing his strength and stamina against them - couldn't resist. Despite having confided to close friends that he'd been experiencing chest pains for the past few weeks, he challenged all the sailors to arm wrestling matches and the booze began to flow.

I daresay he won every single match.

But when he collapsed a couple of hours later from an undoubted heart attack, we all lost.

Even now people still make a pilgrimage to his grave in Ireland and buy him a drink - the locals are amazed that the grass manages to grow on his grave. If anyone ever dropped a match I daresay the topsoil would burn for a month.

But it shows the weird dichotomy in which society as a whole holds booze.

If Ollie Reed was a victim of anything, it was that.

Two things Steve.....blogging ebbs and flows, and just dipping in and out when suits is fine I think...and Oliver Reed was very sexy and very much his own man (could he be played by Robbie Williams in a film d'you think?).

Libby: Robbie Williams? I don't want to ruin the dream if you're a big Robbie fan but I think Robbie would lack the voice and the gravitas. Sure Ollie could be wild and crazy but when he was serious he had a real presence. He could ooze genuine danger. I don't think Robbie has that. To be honest I'd be hard pressed to think of anyone who could play Ollie and do him justice. He was like Freddie Mercury - irreplaceable and impossible to emulate.

It's ages since I've read a biography. I think I might enjoy this one.
Of course, the image that is dancing in front of my eyes now is Oliver Reed naked in front of the fire.

I will always remember his performance in Ken Russell's TV film of Debussy - mainly for the nudity - I was young.

I saw "The Devils" - it was the nude scenes that attracted me, but not "Women in Love" despite the male wrestling in the all together.

I thought he made a brilliant Bill Sikes, shame he had to act opposite Lamb Chops.

They didn't cremate him - couldn't risk it.

Trish: to be honest, he later got the end of his 'old man' tattooed and showed it to a lot of people. That pre-tattoo scene in Women In Love is as naked as he could ever get.

Barry: must admit I'm more of a Musketeers kind of guy. Apparently he used to throw himself so fiercely into the fight scenes that the stunt men were often found shaking in a corner, retching miserably after the director had yelled, "cut!"

Yes, he got his knob out in Women in Love, as well as hungrily sucking Glenda Jackson's tits. All credit to him for that. But the role I most admire him for was Hannibal Brooks. He had to be good actor to be so convincing as a animal-loving peacenik.

Gorilla Bananas: ironically the animal loving side to him was more accurate than the idea of the passionate lothario. The booze I believe took it's toll and he lost most of his capacity for desire. As for animals, he was well known for rescuing strays at the drop of a hat. And the elephant in Hannibal Brooks became genuinely attached to him and allegedly cried when they finally had to part after filming was wrapped up. But don't worry. I'm sure he loved gorillas too.

I really hope you don't stop blogging, there are not many 'constants' left these days!

Suburbia: if nothing else I'll keep going just because I'm a stubborn bastard.

Like Trish, it's been a while since I've picked up a biog. You've inspired me to look this one up. And you've written so touchingly about not just the man, but the stigma.

Thank you. Several things in this post made me sit up and take notice. What makes a blog "good" might well be one that has regularity in its postings. But for me, a great blog is more than that, and written not by a just blogger, but a writer. The kind who will go away and come back after mulling on the topic, no matter how long it takes.

You never fail to disappoint. xx

Being Me: I am both flattered and honoured. Thank you. x

It's good to have you back... though such a deep and well-considered argument won't get you the hits you deserve. You need to return to talking about sexy TV presenters soon.

That said, as a reformed drinker, more power to your critical elbow.

Rol: to be honest I've been haemorrhaging readers for a couple of years now. I've gone past the point of caring or chasing after them. If people want me they know where to find me. ;-)

You blog when you feel like it...when you have something to say...and something missed in all the tips on how to be a wonderful blogger - you know, regular postings, asking daft questions at the end of the post and suchlike bullshit - you have to be able to write, which you can, in spades.

The fly in the web: I think you have uncovered a truth. We write best when we have something to say rather than when we just want to hear a response.

Thank you for the compliment.

Nota Bene: I'd like to make it in the first place just to have something to comeback to.