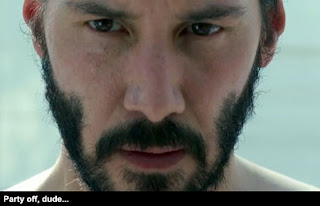 Traditionally on this blog film reviews go down like Nick Griffin on Robert Mugabe, i.e. very awkwardly. The comments tend to dry up rather quickly as people take the excuse “I haven’t seen that film / don’t plan to see that film so I can’t leave a comment anyway so I won’t even bother to read the blog at all. Job done”.

However, I’m bloody minded enough not to care and arrogant enough to think that the power of my writing can overcome any wilful lethargy in my readership. But to show I’m not totally uncaring to your plight I will keep this short.

I had high hopes for this. I saw it trailered at the cinema – it looked rather good – but life circumnavigated my attempts to see it on the big screen. So I bought a copy on Blu-Ray for my wife and I to enjoy at our leisure.

We watched it over the weekend.

And now I want to kill Keanu Reeves.

Because having seen his performance I have been left in the emotional state of permanent WTF?

WTF was he doing in that film? Just WTF? And I mean that conceptually, metaphorically and professionally. What. Was. He. Doing. [Big question mark.]

The original story is based on an 18th Century Japanese legend. 47 Samurai avenge their murdered Lord knowing that their own code of ethics will ultimately demand their own deaths via seppuku. There’s a poignancy and sad beauty to this along with scope for lots of action and martial arts choreography. In cinematic terms the story should be a sure-fire winner.

And the supporting cast – mostly Japanese / Asian – were excellent. No big names (by Western standards – but really, what do we know?) but still they impressed me. They gave it their all. Pathos and sensitivity at war in a culture where emotion is not meant to be overly shown. I’d argue that their performances were poised and subtle and damned impressive.

And then there was Keanu. Shoehorned into the story as a “half breed” with special magical powers.

I’m betting there’s no sign of his character at all in the original legend. He was just inserted because the producers decided they needed a big name to sell the film to the box office. So we get this bolted-on element to the story. An add-on that the plot doesn’t really require and, as a result, is totally imbalanced by. Keanu is like a bogoff deal that you want to refuse. No really. I don’t want the extra bit. I don’t want the freebie. Please, please keep it.

Now, if I was Keanu I‘d be thinking: I’m extraneous to this story; I’m superfluous to the requirements of the emotional arc, therefore, I’d better pull my finger out and act like I’ve never acted before and earn my right to be on the screen.

But I am not Keanu. Keanu is Keanu.

And that is the problem. Because Keanu is Keanu all the way through the film. Sullen. Unresponsive. Flat. Incongruous.

He talks in the same gruff monotone whether he’s been being beaten (a criminally too short scene), offering comfort to a dying comrade or exchanging romantic pleasantries with his love interest. He talks like the Hollywood voiceover man from the 60s and 70s. The one who invites you to come see the next Warner Brother’s [or whatever] spectacular in that voice that makes it sound morally imperative that you come to the cinema right now and have your life changed by the experience. You know the type of voice I mean. Now imagine that voice reciting a fragile poem by e.e.cummings and utterly ruining it, utterly disembowelling it with the barbarism of its relentlessly galloping speech rhythm. Now you have Keanu telling his lady love that he will search for her through a thousand worlds, through 10 thousand lifetimes. He spits the poetry out like a half chewed hamburger. In his mouth it becomes pure American gristle and the gentle lotus flower breeze of the Japanese love-story curls up and dies in the blast from his meaty breath.

And he has but one facial expression. The bearded grimace. That is it. All the way through the film. He grimaces. From behind his inexplicably dirty looking beard.

And then, at the end, he becomes an honorary Samurai and gets to kill himself – along with the other Samurai – with full, painfully tragic honour.

In that single moment Bushido becomes bullshit and the entire point of the film is utterly destroyed.

Because, in my view, Keanu has no honour. Keanu is not a Samurai.

Not by a long chalk.

But he has more chance of becoming a Samurai than becoming an actor.

In fact he has more chance of becoming Japanese.

It sounds if Keanu was trying to copy David Carradine in being the half-breed who's as mystical as the full-breed. Maybe he didn't succeed, but I'm surprised you didn't stick up for your fellow beardie. At least I won't need to see the movie now that you've reviewed it.

Gorilla Bananas: a beard is no guarantee of my loyalties. As both Lenin and Gerry Adams will tell you. And Brian Blessed.

As a geek who did a film degree
I loved this

John: the film or my review? Please clarify. ;-)

Have I seen a Keanu film since The Matrix that I've liked? No I don't think so….

Nota Bene: "since The Matrix"? I'm sure you'll find he was shit in films before that...

Well what do you expect for £1 from the pound shop?

"demand their own deaths via seppuku" It's a bit like having to change at Crewe?

I don't know why you don't simply buy the box set of Morse and Lewis.

Laura: either Dirty Dancing or Big Trouble In Little China.

Keep seeing this on the shelves at Sainsbury's. And every time I think of you and your disappointment.