I knew something was wrong the minute I got home.

My letterbox was grimacing. Like it had a horrible taste in its mouth.

Behind the door, laid out on the mat like cat vomit, was the item pictured below. 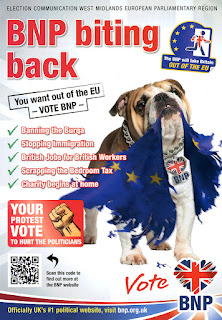 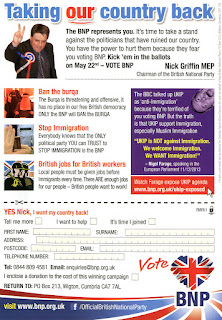 I felt sickened and shaky. I felt besmirched. Like my home had been violated. I had been on the receiving end of a BNP leafleting campaign. One of their hate-monkeys had actually walked up my path and touched my door. And then had slid something bilious and nasty into my inner sanctum.

My first reaction was to screw it up and bin it without looking at it. But then I thought, “No. Know your enemy.” So I read the leaflet. Every word. And my gut ran through a gamut of emotions. Everything from contempt, scorn and vituperative ridicule to the confirmed belief that these people are genuinely missing a chromosome; that the wiring in their brain is missing a couple of essential connectors, forever denying them the opportunity to reason and feel like normal, adult, articulate human beings.

And then there are the pictures, the images. The lazy buy-in to outdated, outmoded metaphors that only have meaning to idiots whose view of Britain is trapped in some fake, bromide stained stasis chamber of pre-war empire-fed glory full of working men wearing cloth caps, wives who stay at home to cook Beef Wellingtons and children who play solely with gender appropriate toys. And we all extol the Christian virtues of love thy neighbour as long as your neighbour is as British as you are. And don't worry of you have no idea of how to benchmark those Great British credentials because the BNP will do it for you.

Check out the picture of the Burka wearers:

They want to ban the burka because it is “offensive and threatening”. And to drive that singularly stupid and vapid point home they have pictured a couple of Burka wearers flicking their V’s at the camera – thus, in my opinion, totally proving their true blue British credentials forever. But that irony is lost on your average BNP member (and let’s be honest; they are all average). Is the picture mocked up? Is it real? Who cares. It’s like something out of Viz magazine. It is comic and laughable. But it is also tragic and lamentable because there will be some BNP mongrel somewhere, working himself up into an orgasmic fury of outraged indignation over this picture. It is akin to the fake Boer war footage that was played to English citizens centuries ago – shot in a London park but purporting to show Boer atrocities to galvanize the zeal of the average Englishman and give him fuel for the fight. It is nasty propaganda designed to spread hatred and xenophobia. And if that hatred and xenophobia already exist then it is designed to inflate it up into atomic mushroom cloud proportions.

And at the end of the day, is the Burka really, truly threatening and offensive?

This entire leaflet does not seek to enlighten or educate. It does not seek to question. Because that would be dangerous and self-defeating. The BNP relies on the stupid misconceptions and inborn bigotry of its incestuous membership to continue its existence. The BNP more than any other party wants to halt upward mobility and free thinking and trap this country forever under a glass jar of anachronism and vile paranoia. This leaflet has but one purpose. To reaffirm the idiocy of those who are already tainted with stupidity and make them feel that they are right. Seductive. Comforting. And, sadly to some, a vote winner – those people whose innate cowardice prevent them from questioning and second-guessing their own assumptions and hatred of people who, if they got to know them despite their different languages and cultures, would be discovered to be just like them. More or less. Just without the silly haircuts. Possibly.

In all honesty, I would rather have had a urine stained tramp shove his cock through my letterbox than this leaflet. In fact, to piss Mr. Nick Griffin off even more I’d go as far as to say I would rather welcome a whole army of Polish / Arabic / Asian immigrants, each of them taking it in turns to make love to my door than to ever have one of these puerile leaflets land in my hallway ever again.

No. Let’s keep Britain for the intelligent and the liberal and the fair minded and those with the guts and humanity to question and oppose hate-filled manifestoes and find a way forward that unites all cultures and all races.

You can't be sure that the wearer of a burqa is female, so it gives women some protection against bum-pinchers. Maybe that's why this political group are against it. I deplore it because of its poor ventilation. At least a kilt can get some air up it.

Gorilla Bananas: and an awful lot of midges. I'm always puzzled that the y-fronts were not invented in Scotland.

"especially Muslim immigration" seriously?! Oh FFS! So a Turk would be welcome provide they weren't Muslim and they provided a hearty kebab after being on the lash?! "British people want to work" Alright then! There will always be a British idle class no matter how many plumbing positions have an opening. It's racist, builds hatred and is a prime supporting case that some censorship could be a good thing. To be honest it's a leaflet only fit for kindle and the scary thing is they will get votes.

K Ville: indeed. Do the BNP really want to live in a world where the only take-aways are fish & chips? would McDonald's and KFC be classed as a foreign import? I did actually consider pixelating some of the leaflet - I didn't really want to give them an advertising platform - but freedom of speech is something I believe in so in the end I figured I'd let people see the hateful rubbish they're spouting and make their own minds up. People always prefer to have a choice. I just hope they see that the BNP = no choice for anybody.

You should teach your door it's okay to spit.

in the interests of unbiased coverage, are you going to allow the other parties equal space on your pages now ? Because this might be construed as giving the BNP an unfair advantage. Because, let's face it, no sane person would see this as anything other than xenophobic shite, and those who do agree with them are going to read any coverage as justification of their point of view, no matter how vitriolic.

So get your knives pout and do them all.

in the interests of parity, of course.

Keith: Good point. Though the way my political life is unfolding at the moment it might be easiest to just produce one post that makes the point that all politicians are self-serving, self-aggrandizing arseholes who are corrupted by the very political system they seek to utilize to improve the lives of their constituents.

I quite fancy a pouty knife.

Should the enormous number of Brits working overseas receive the flip side of this logic?
Having lived in France and observed the Front Nationale, they don't really mean foreigners, they mean non-whites of any creed.
Only education, and raising good children of our own, will overcome this.

English Rider: agreed. We will never stamp it out completely but it will be a better world when such thinking is a truly minority point of view.

Following from English Rider: having lived in an area where the Front National was strong I would hear mutterings about foreigners when queuing...only to inevitably have someone say

But that doesn't mean you, Madame...

So colour was what counted!

But I think I should like to ban these garments as being disrespectful to women.

The fly in the web: I appreciate where you're coming from (ideologically as well as geographically) but for me I'd like all women (and men) to be allowed total freedom of choice about what they wear - an argument I'm sure that will offend some on both sides of the divide.

I've found it worrying that many people, frustrated by the main political parties, are looking to these extreme groups so they can 'make a stand', regardless of the actual policies. They may well get votes because of the wish to put two fingers up at the big three. Makes me despair.

The bit which stuck out to me was the call to ban the burqa followed by "it has no place in a free British democracy".

Because, you know, that's what we do in a free democracy -- ban things we find offensive.

Wanderlust: if these people had a brain they'd be truly dangerous.