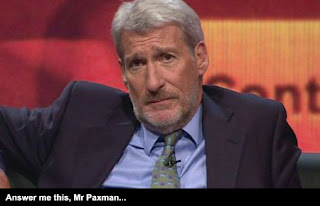 Relative to your average footballer I must be the brain of Britain though a friend I had a Facebook argument with on Saturday assures me that some footballers these days actually have degrees.

I’m assuming he didn’t mean as in third degree murder. Which is a pity given how I feel about football.

The wife and I have been struggling of late to answer the cornucopia of questions that our youngest son has begun to throw at us.

The “reality science” ones are bad enough:


But the ones that are really frying my brain are these:


Home life at the moment is akin to being a permanent contestant on University Challenge with a very impatient Jeremy Paxman demanding constant and immediate satisfaction. Incidentally, I muse on the pros and cons of Jeremy’s bedroom manner in my new Kindle book *cough cough* “Sex With…” which you can currently buy from Amazon. Please do.

In the end, when our young brainiac came up with the worst question of all: “Well, why don’t you know everything, daddy?” I finally admitted defeat and went out and bought a children’s encyclopaedia from WHSmiths.  On the whole it’s been a good buy and has put a stop to about 50% of the questions.

For the remaining 50%, it seems that even the best minds in the world stumble to a halt when trying to work out how many yesterdays there were before tomorrow.

My answer of “all of them” failed to impress.

One thing I do know though is how to make Professor Brian Cox have a nervous breakdown.

Lock him in a room for an hour with my son.

(And a copy of my “Sex With…” book which, funnily enough, for those of you who are interested, also features an enlightening piece about what Professor Brian might be like in the sack.)

What you should do is give inscrutable answers like a Chinese sage, addressing your young disciple as "Grasshopper". You've probably got a lot in common with Confucius and he'd certainly approve of your beard.

Gorilla Bananas: your suggestion is a sound one and would work but for the fact that my son is genuinely far more inscrutable than I could ever pretend to be.

I shall ask Jeremy himself when I meet him at the upcoming Edinburgh Book Festival - if I can get near him for the legions of 'corporate' ticket holders who really couldn't care less who they're going to see. When you get very rich and famous and they book you for the Festival, remember those of us who perhaps put you there!Off to peruse your book now.

Nana Go-Go: bless you. And if you do get to talk to Jeremy it's probably best not to mention that I spilled the beans about our night of passion in my book. He's very coy about that kind of thing. Unlike Hugh Fearnley-Whittingstall who I write about having sex with on page 29.

Ha Ha - your secret's safe with me - now be off with you - I'm busy watching 22 high,tight and pert Latin American bottoms running up and down a football pitch but don't tell anyone about that either!

Nana Go-Go: I guess the groundsmen are quite buff these days, are they?

How tall is a question mark ?

Keith: depends how short the answer is.

You have a sex book?

I have missed a post. Need to scroll down.

Trish: see, turn your back for 5 minutes and I'm putting it about all over the place.

My go to answer used to be, "Hmmm, I think you should ask your father."

It is now, "Hmmm, I think we should google that."

Wanderlust: I wonder what people did before Google? Possibly sent their kids to boarding school?

I'd send him off to Google university. Then he can fuck all our minds.

Alternatively you could scare the shit out of him by saying if he carries on asking damn fool questions he'll turn into Brian Cox.

Barry: I bet Prof Cox is loaded so that's fine by me.