Who Is The Lord Of The Trolls? 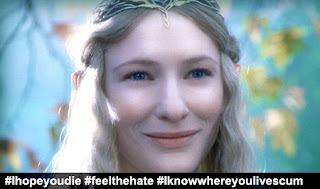 The internet is much changed for nothing is as it once was.

It began with the forging of the great chat media platforms.

MySpace for the aesthetically challenged cyber-dwarves. LinkedIn and Facebook for the middle-to-upper class aspiring elves who wished to share photos of their kittens and their children and what bottled wine they’d drunk the previous evening. And Twitter… Twitter was created for all those who wished to leave snarky, anonymous comments in 140 characters or less.

But in this they were much deceived, for in secret an umbrella term was forged – social networking – and into this was poured all hatred, malice and the will to denigrate all life on virtual Earth…

And I could go on and on but you get the picture.

The internet is not a nice place. I know it has always had dark corners; cyber attics and damp basements where the virtual world kept its various madnesses and psychoses locked up. In fact, not even locked up – the correct URL would take you there in an instant. But at least the internet used to have a happier, lighter side; it used to have a tangible nod to the ethos of freedom and free information. Something unfettered (largely) by legal constraints, authoritarianism and the bigoted fears of the few. Something fun, frivolous and nicely rebellious.

Sadly I fear the Internet’s Woodstock years are over.

The bigots and haters have taken over the playground.

Cyberbullying is rife – anything from common-or-garden peer pressure to the kind of nastiness that drives people to suicide. Trolling is commonplace – anyone or anything is subject to cowardly attack but if you are a celebrity who dares to have a Twitter account you can consider yourself easy meat for the armchair reactionaries. If someone steps out of line or is seen to be out of step the mob sets upon them in a manner that is as disgusting as it is unforgiving and unreasonable – think of that poor scientist bloke who was virtually destroyed last year for wearing a shirt that featured pictures of bikini-clad women on it; the punishment most certainly did not fit the crime. And who are these self-righteous gnomes who feel they have the right not only to judge but also to condemn?

Stealing information and photos is seen as the fault of those who stored the photos online in the first place (kind of like blaming a victim of burglary for only having a shop bought lock on their front door whilst daring to own stuff). And various groups can now shutdown whole web servers with seeming ease for a major cause or a minor gripe or just because they are so pathetically maladjusted they just want to create havoc for the sense of transient joy it inevitably brings them in-between bouts of Warframe or whatever other massively multiplayer online game is currently distracting them from thoughts of incessant masturbation.

I’m not feeling the love anymore, people, and I don’t like it.

Lord knows I’ve taken a pop at the odd celeb over the years on this blog. But in my defence I hope I’ve presented a balanced (or at least an entertaining) argument, have been able to admit if I’ve been wrong or missed a redeeming point and always, always I am identifiable and accountable. I don’t operate an anonymous blog and I can be easily contacted and given a spanking if I’ve been a naughty boy.

I don’t make death threats or rape threats or threaten to harm other people’s family or property just because they voice an opinion that is at variance with my own. I don’t call down holy war on individuals who I disagree with or who present an ethos that is the opposite of the one I choose to adhere to. I don’t even wish dead those few souls who I utterly despise. And there are a few, believe me.

Because their divergent views, in my opinion, do not mean they should be exterminated from the face of the earth at my say so. I recognize that other people have the right to their views, no matter how ill-informed I think they may be, and have a right to live unmaligned even with those views up to but not including the point where they start directly affecting others adversely.

There has much been made of the ideal of the freedom of speech in recent weeks. The murders in Paris have placed it in the forefront of everyone’s mind. And regardless of whether Charlie Hebdo was a platform for healthy political satire or just an outlet to knock already beaten down minority groups I would argue the point that people have a right to express even offensive views. The freedom of speech must be freedom for all without any caveats or it is not freedom at all.

And yet I despair at the nastiness that proliferates the internet now and wish it could be stopped. And I think it bothers me because too many people are voicing their bile in a most cowardly fashion. Using nom de plumes or alternative accounts. Obfuscating their identity. Claiming and utilizing a personal freedom in order to destroy the personal well-being of others without the risk of any come-back or fall-out.

And that is wrong. That is my problem with it.

If you want to join in the latest witch-hunt then do so without a mask on your face. Let the world see who you are if you have such strong opinions that they must be expressed in aggressive and violent language. If you want to verbally threaten someone then let them and the rest of us see you coming. Take responsibility for what you are saying / spouting.

Don’t stab someone in the dark and then run away back into hiding and imagine you are a hero or have somehow done the world a great service. Because you haven’t. You’ve lost all moral high ground and placed yourself lower than a snake’s arse.

At the end of the day I don’t want the authorities or the powers that be to police the internet. I believe it would be disastrous. But until enough people make a stand we can’t, alas, police ourselves.

So it is up to the owners of all these social media networking platforms to do something. To close down the trolls and the snipers. To make users somehow as accountable for their digital outpourings as they would be if they’d shouted a hate filled slogan out on the street in the real world.

Am I wrong to want this?

Tell me and I will reply. Engage with me and we can talk.

I’m happy for you to have a different opinion.

Please express it with respect.

You're not wrong to want it, but it won't happen. The loonies were always there, and no one can stop them from commenting on blogs or posting in newsgroups. Just show them your arse and invite them to kiss it.

Gorilla Bananas: you are more than likely right - in the end that is the only response. And certainly satisfying.

I find myself agreeing with you and GB is right on the nose (or butt)!! :-)

I complained to the BBC about them allowing venomous,racist and radical comments to be left on one particular news article I was following online. Nothing was done about it so I removed myself from the group. I don't want to be affiliated with anything or anyone who shares those kind of biased opinions. I stick to my crafting site - much better class of folk on there, though the odd cyber-bitch turns up now and then but the best way to deal with those kind of attention-seeking sub-humans is to ignore them. Have a good troll-free weekend, pal.

Nana Go-Go: I'm sure the Beeb was thinking "give a dog enough rope..." though of course you can never guarantee that the barking of one dog might not trigger answering barks in others. However, still I would uphold the ideal of free speech. As you say, these people can always be ignored. But again, I daresay these comments were left anonymously and that is my beef. Make these people identifiable! See if they have the courage of their convictions, then! And if they don't, why then the threat they represent is much diminished. As for the ones who stand up and let themselves be counted... well, at least we know who they are and what we are dealing with.

I am with the gorilla. As long as there is anonymity there will be internet dicks. And without anonymity a huge part of what makes the internet incredible would be lost.

Fredulous Yo: unfortunately 'the much' that makes the internet incredible is being lost already amid the cesspool tidal-wave of shite that the other side of anonymity brings.

Rol: if only there was some way to permanently 'block' people in the real world like you can online that didn't involve a shotgun and a prison sentence... Actually, just losing the prison sentence would be fine.

Would you murder someone if you could get away with it?

Nota Bene: no. Why burden my conscience with their death?