To Wee Or Not To Wee 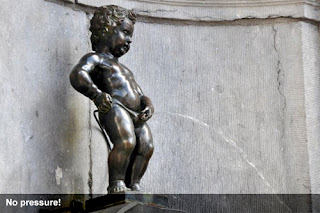 Those of you who have foolishly connected to me via Facebook will already know of the great urinary cessation that I suffered yesterday on what has now become known as Bladderless Friday. But for those of you who have preferred to keep me at arms distance (i.e. occasional readers of this blog) let me fill you in.

I'm currently suffering a nasty bout of sciatica. I won't harp on about the pain (but if Job has sciatica then he'd really have something to moan about) but it was enough to drive me to the doc's on Tuesday and in some desperation demand some release.

I was furnished with a prescription for Zapain. A drug that sounds like it was lifted from the 1960's Batman TV series. I don't as a rule take pain killers (preferring instead to be vocally miserable) but this time it really was a case of needs must.

What I hadn't taken into account was my body's now apparent intolerance to Zapain. Initially it was fine. I could cope with the woolly-headedness and the light-headedness because I was at work and didn't care and, on the plus side, the incessant, crippling agony of screeching back and leg muscles finally began to dull down to an almost forgettable background hum.

What I failed to acknowledge to myself was that gradually my once strong and regular flow of urine (no, I am not talking about this blog but real urine) was beginning to dry up. To reduce to a tormentative trickle.

At first I thought it was my imagination. Thought it was psychosomatic. But as the days wore on it began to dawn on me that not all was well in the State of Denmark. Going for a pee was becoming harder and harder to accomplish. I was having to concentrate on relaxing and 'letting go' before anything would happen. I'd have to lean forwards over the toilet as if to relieve pressure elsewhere - tip the kettle over, so to speak - and let a desultory tickle dribble forth.

By Thursday night it was worse and I finally admitted to myself that I needed medical assistance. Going for a wee now required a gargantuan effort of will - all my focus drilled down onto the seemingly impossible task of relaxing my bladder. It gave me heart palpitations, it gave me the sweats, I thought I was going to pass out. And where once there had been a torrent there was now not enough to turn the smallest of Archimedes' Screws. Think of a hosepipe with the tap turned off. You know there is water in the pipe but as you lift up the hose only a sad, mean trickle plashes forth.

By Friday morning I was ashen and fearing the worst. The first thing a guy thinks of when he has trouble with his water-works is prostate. Or worse. In practical terms I was thinking catheters and the doctor's fingers shoved up my bum... neither of which were enticing me to the doctors but the thought of spending the day in bottled up agony didn't appeal to me either.

My good lady wife - as shaky as I - drove me to the doctors as soon as we got an emergency appointment. I was by this point fearing it would be a hospital job. Either that or death by drowning.

As it turned out nothing so drastic. My doctor (not the one who proscribed me the Zapain I might add) might have the bedside manner of a Findus frozen fish-finger but he knows his stuff. He quickly ascertained that Zapain was not doing me any good at all and had in fact set my bowels rock-solid. To the point where they were inhibiting my bladder from its usual functions. No more Zapain. Not now, not ever. Instead no more than 4 paracetamol a day, lily-livered, flower of ill health that I was. As for peeing... I needed to drink lots and lots of water and take some laxatives. He felt sure that as soon as the bowel was released the bladder would soon follow.

I must admit I was sceptical. The thought of chucking loads of water down my throat and becoming the physical embodiment of the Elan Valley Dam didn't seem to me to be the best course of action but I decided to trust my doc and I was heartily glad I did.

Literally within an hour of the softening effects of the laxative I'd managed to induce a small waterfall - with effort. A little while later the Dam Buster's Theme Tune could be heard blasting from my bum cheeks as several tonnes of blackened concrete dropped away revealing blue skies and clear air and an unfettered passage to the west.

Since that wonderful hour my bladder's pouring forth has become easier and easier - though I still feel tender and sore and rather battered. And of course the back pain has started again. Really, 4 paracetamol are just not going to cut it.

But I'd choose the rack over the plug any day of the week...

Too much information, written with wit, although your eyeballs were floating. Glad it was resolved without hands on interventions.

Well done Doctor Number 2 for correctly diagnosing the cause of your Number 1 & 2 problems. Didn't you realise you were constipated as well as leak proof? I suggest you celebrate by pissing on a garden gnome and barking like a dog.

English Rider: me too. My doctor has got big hands.

Gorilla Bananas: I was weighing anchor as usual - or so I thought - but looking back on it now I guess it was just a few dry rafts as opposed to luxury cruise liners. The way I feel now I could piss on every lamppost for the sheer pleasure it would bring me.

Go with the flow Man !

p.s. glad you are better

Keith: except when it's like passing sand through a straw.

LCM: put your fingers where?!!? Sorry. Still a bit sensitive...

I'm glad that you are better...but why don't blasted doctors just prescribe codeine for pain...best ever and no problems with the nether regions.
Just as well you were not in the hands of a nursing sister of my acquaintance who would treat the terminally bunged up with an enema and threaten them with action with a tablespoon if that did not work - guaranteed to have anyone legging it for the loo in double quick time...terror might not be in the BP but it certainly had its uses...

The fly in the web: Zapain does contain codeine - along with paracatemol. I think I was just prescribed too strong a dose... which wouldn't take a lot as I think I have only taken pain relief about 5 times in my entire life. Glad I was spared the spoon.

That stopped you being a piss artist.

Glad it was nothing more serious: although it was a pain in the .....

I share your pain. Well I don't actually...but as a middle-aged bloke, any post that suggests urinary problems gets my attention...Glad you're pointing percy again and seeing whether you can out pee the bloke next to you in the public lavatories. Have you put a marker on the wall to show how high you can go?

Barry: I can laugh about it now but at the time the thought of anyone taking the piss would have been... well, ironic.

Nota Bene: after last Friday I'm happy with anything above shoe level.

I shouldn't be laughing but this was written so well - Job having something to moan about and 'preferring to be vocally miserable' particular phrases which amused me.
Hope there are no lasting effects of your urinary blockage - sounds very scary.

Trish: I can laugh about it now but it wasn't funny at the time!

hi
i saw your blog on john grays list and liked the name.....
what an introduction!

my son once had a bulging disc which was causing similar problems. never in my life did i imagine that i would some day be instructing my 15 year old on how to use an enema.

a chiropractor will fix your sciatica

Kylie: thank you and welcome! A chiropractor is the one thing my doctor didn't mention. I assume I don't need a referral from my doc but have to refer myself?

yes, just give one a call!
doctors think it's quackery but you decide :)

Kylie: most of modern life is already quackery...

Oh how i love your blog, I am chuckling like a big kid after reading this

Cherie: bladders have long been associated with humour in the UK...