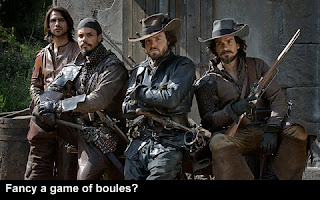 A small gripe, this, and in the bigger scheme of things doesn't count for a great deal. But it does, to use the Aussie vernacular, get my goat.

I'm at that age / station in life / financial situation where going out regularly - pubs, meals, cinema, cultural venues, etc - is nigh on an impossibility. They are special treats that must be saved up for and savoured. I don't have a problem with this. This is how life is at the moment and others have it far worse.

But for me a perfect way of unwinding after a hard day at work is simply time curled up on the sofa with my good lady wife watching some choice telly. Staying in and watching telly is undervalued and mis-sold in the modern media representation of our dynamic, thrusting, young techno-adept society.

But I'll bet I'm not alone in holding various TV show up as the highpoint of my week and viewing them as some kind of personal reward for another day at work got through / another ordeal endured.

Be it Doctor Who, The Musketeers, Dragon's Den, the forthcoming re-adaption of Poldark - whatever your poison - these humble little treats afforded us by a wonderfully creative UK television and movie industry (that is largely unsupported by the UK government) are what keep most of us going during the mundane, day-to-day drag of our everyday existence.

So it pisses me off - admittedly disproportionately to the crime - when the programming schedulers suddenly interrupt a series run to put something else on instead. Sport usually or some yaw-yawing political debate.

The current run of The Musketeers has been, to my memory, interrupted no less than 3 times. Now I recognise, with consummate bad timing for this post, that the current hiatus is because of Comic Relief next week and that's fine. That's understandable, acceptable and palatable. But the first two occasions were because of sporting fixtures.

But by the by.

If I were the writer / producer / actor in any of these shows whose transmission run is broken for the sake of a football match I would be spitting feathers. A good drama series has a flow to it. An over-arc in addition to the arc of each individual episode. That flow is part of the creative drive of the show. And though some might argue that with the advent of catch-up TV scheduling no longer matters, historically the general public has an expectation that if a TV drama series is broadcast at some pre-specified and henceforth established time on a week evening then that is the slot which it will hold for all perpetuity - or at least until the series terminates. England expects. And I'm sure Scotland, Wales and Ireland do too.

To have all that time and creative energy, that carefully crafted flow cast aside for a rugby match is infuriating and insulting. I'm not knocking sport, really I'm not. If that's your bag good for you. Be welcome to it. But given the sheer amount of TV channels these days - and many solely devoted to sport - why should a sporting fixture be allowed to shoehorn its way into another schedule to attract probably less viewers than have been driven away by the banishment of the original show? Shove it onto a sports channel where the jogger-watchers can drink their beer, eat their pies and vicariously enjoy the healthier lifestyle of other people without incurring the wrath of the more tasteful majority!

Like I said, it's a small gripe. And I will accept all accusations that I am a stick-in-the-mud, dyed-in-the-wool traditionalist but, Goddamnit, Friday night is "Musketeers night" and that's all there is to it!

Sport on TV earns huge advertising revenues and pubs are expected to show big games to their customers. How can such commercial interests take second place to an old dinosaur who still savours watching a weekly TV drama? If you recorded the TV serial before watching it, you could savour each episode at a time of your choosing. Do you have the patience to save Cap'n Poldark for the summer?

Gorilla Bananas: no; I want to know that I am watching it at exactly the same time as all the other sad cantankerous gits in the country.

What colour wool would you be dyed :-) I could spin it and knit you a pair of socks

My favourite combination.... stripes or dots :-)

Cherie: I'm leaning toward the enforced structure of the stripes...

I completely agree with you Steve. I love the Musketeers.. don't like this "no flow" behaviour, grrrrr

I watch on iPlayer and get most annoyed when something which should appear on time doesn't. It puts me out considerably as I'm then likely to forget it until it has disappeared.

Apparently they speed programmes up too so they can show more ads during the screening...

Annie G: what infuriates me most is the way sports fan get treated with more respect than lovers of drama and yet the BBC always bigs up its drama repertoire...!

The fly in the web: iPlayer is still imperfect too and suffers from the vagaries of an individual's internet connection or the amount of people demanding to watch a certain show at the same time. Tried watching Wolf Hall on iPlayer and it was painful.

Amanda: thankfully this isn't a problem with the BBC. Yet.

Phwoaarrr! That's an awesome pic! I totally agree with you about the scheduling. How dare they replace all that leather and huge pistols with men in tight shorts,high,tight and pert bottoms and odd-shaped balls (rugby at the mo). It's rather like replacing all that Scandi drama on Beeb 4 with a gazillion re-runs of Inspector Montal-frickin'-bano. Let's banner-up and take to the streets to complain!!

i really havent watched tv in years. Hubby or kids have been taking the controls and rather than make a fuss i have done other things but i do have a couple of favourite shows and i hate it when they are interrupted by sport.

i like scheduled tv better than recorded or internet offerings precisely because i set aside that timeslot and anticipate the show. watching "at my convenience" is always slightly disappointing because people tend to interrupt, something else nearly always manages to grab the priority and internet ads seem so. much. more. annoying.

Nana Go-Go: apparently they all model their facial hair on me. Just thought I'd mention that. And why did I hear the phrase "banner up" as "lather up"?

Kylie: there isn't the sense of occasion when you watch stuff at your leisure via the internet. I like the feeling of watching a programme knowing that millions of other people are watching it too.

I get really pissed off when the programmes interrupt the ads. That aside having the good wife sitting on the sofa next to me and jabbing me "Do you know it's a million years since the original Poldark - and who was the actress who played what's their name - you know the one who looks like her in Rosemary and Tyme: but is really nice. She died last year or was it the year before. Married to Christopher Casenove - he's dead. So is he now. He doesn't look well does he. It's the wig and the wine .Couldn't they find another part of the Cornish coastline to ride that poor unfortunate horse along. It's bleak, but not as bleak as I remember it in 1976. That's progress I suppose and 4K - what's that!

Yes! If that happens when I'm following something, I lose track and then miss the rest...grrr

Barry: I have to say I concur with your wife regarding that poor horse for I commented myself about the amount of times they rode it back and forth across that windswept cliff-top.

Nota Bene: sorry someone interrupted me before I could finish reading what you'd written and now I've completely forgotten what it was you were saying...

I am happy when the sport hijacks the schedule, then I can watch the box sets with no fear of missing something.

Keith: this is true. But the traditional night for watching boxed sets is Saturday when all the reality-TV bollocks is on.

It has just occurred to me this post title could pair with your post a few weeks back.

Poldark all the way for me!!

Suburbia: have to say I really rate Poldark. Poldark and The Musketeers are helping keep me sane at the moment. Which says a lot about my state of mind.