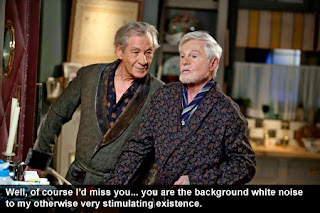 They say that absence makes the heart grow fonder so I have no doubt that over the last three months, although you have all been preoccupied with steering your loved ones away from the evils of extremism, trying to combat the attritional effects of ever-increasing austerity and washing your smalls with the cheapest but most eco-friendly washing powder to be found at Lidl you are now - upon discovering a new blog post from yours truly after a break of a quarter of a year - overcome with emotion so deep and so raw that you can barely read these words in front of you as the realization of how much you have missed me finally hits home.

Well, let it wash over you in great waves. Don't try and fight it. Let the deluge fill your teacup to the brim and then slowly but surely raise sea levels the world over.

For my part I am trying to think of a suitable celebrity couple with which to best represent my odd relationship with you all. Thelma & Louise? Not quite. Batman & Robin? Sorry, you don't have the legs for it. Closest I can find is Freddy and Stuart from Vicious. Of course I am Freddy, ever demanding and not really able to express the slight fondness I feel for you all though perfectly able to articulate my sneering contempt for any effort on your part to please me whilst you potter about the house (paid for by me) catering to my every whim and trying to kid yourself that you are utterly indispensable.

Yes. We are all entangled in a slightly clichéd gay relationship that exists only on the television.

But on the bright side, we can now get married.

"What have I been doing?" You clamour. "Where have I been?" Unlike the pussycat from childhood rhyme going to London and visiting the Queen has not featured on my itinerary at all.

Unfortunately, my father dying, trying to sort out stuff from Karen's mum's will, and trying to keep heart, body and soul together have featured large. And none of it has reached a stage that anybody could term "resolved".

As an aside - and thankfully it is only an aside - I had my own health scare last week when a persistent cough drove me to the doctors. Given my father's demise through lung cancer my doctor thought it best that I go for a chest X-ray immediately - to make sure there was "nothing nasty" causing me grief. Up until then I had gone for 8 weeks, coughing away without a second thought. As soon as the X-ray was booked in (and I realised my doctor was taking it all rather seriously) my mind kind of imploded with all of the unwelcome possibilities that exist in the world of disease and medicine. I had to wait a week for my results with my former casual cough now being the harbinger of chemotherapy at worst and the inaugurator of the iron lung at best.

It's appalling how one's mind can torment you and torture you. And it is totally self-defeating. Especially when you consider how some theorists posit the idea that thought and observation inform and create reality. As I waited for the 7 days to elapse before I could ring in for my results I found myself thinking of Schrödinger's cat quite often and realized that, in this uncertain interim, according to the laws of the Quantum universe, I both had and didn't have cancer at the same time. The answer lay in a closed box and would not settle into one of the two states until I opened it up and had a good look at it. Until then, to some degree, my behaviour in the universe would determine my fate.

Some believe that to get what we want from life we have to behave as if we already have it... and then the universe furnishes it to us accordingly. If we fill our hearts with yearning and desires that seem hopeless then the universe merely gifts us more of the same. The key is to live your life as if your desires are already met.

I have no idea whether that is true or not. I do not have empirical evidence that it works.

All I know is my results were clear and the doctor has put my cough down to either the onset of asthma or hay fever and since I have dispensed with subconscious fears about the Big C my cough seems to be getting better on its own.

And I am back. Back amongst you all.

So all is well that hasn't ended. See? Life can still be good.

Now put the kettle on and stop your embarrassingly high-pitched whimpering.

It's lovely to see you back and sad to hear of such travails invading your life.

Alex, many thanks. It's been an uphill struggle and to be honest the peak is still ahead of me... but the air is becoming clearer.

Yes....its about time you returned..lnervous cough or not!

John: I'm very glad to be back spluttering and expectorating over everyone. They don't call me Hawk-eye for nothing.

Make sure that you are generous with your bugs when you return to work....your colleagues need a break too...

The fly in the web: it is, after all, what the Big Society is all about.

So glad to see you writing again. I'm glad your test results came back negative. I know how scary that can be. I'm one year away from the age my mom was when she died of liver cancer (which I think started in the intestinal tract). I find that I also carry that unspoken fear that I may receive such a diagnosis out of the blue.

Wanderlust: we all carry a nameless fear around with us, I think. Most of the time it's not nameless at all but is clearly and understandably identifiable. It was a tough week and not pleasant to face up to my own mortality. But the relief was almost worth it. That and re-evaluating what is important to me. You can't go wrong with family and friends. And those across the miles are just as precious. Never let your fears stop you from living.

To corrupt the immortal words of Thin Lizzy "The Boy is Back in Town".

Barry: or as Schrödinger would say - to be and not to be. And Thin Lizzy is a pretty darn cool theme song.

You don't look like the cancer type to me. The wispy beard is probably better protection than tomatoes and whole grain cereal. And Freddy and Stuart gave me a good laugh. Trust you to choose some hokum I've never heard of to make your analogy!

Gorilla Bananas: thank you for the clean bill of health. I missed you too.

My cat regularly goes missing and I have no idea whether it is dead or alive and then, like you, it returns and forces the collapse of the superposition. Oh just go and spoil it all why don't you.

PPS glad you came back alive not dead (or dying)

Oh good. I was about to send out a search party.

Rol: search party or hit squad... it's all the same to me.

Oh well done. You've come back. Not a word, not a phone call, not a letter. Nothing. You are just so ungrateful. We've been up all night, every night for three months wondering what was going on. I've a good mind to give you a good hiding. Who do you think you are - the Prodigal Son? You are grounded for the next month. And no ice cream for the entire summer.

Nota Bene: when you administer the good hiding... do I have to wear the gimp mask again?

oh marvelous, it is good to see you back old boy.

Not From Lapland: well, you're a fine filly and no mistake. Ta very much.

Bugger, by the time I got here the teas gone cold and biscuits have just gone!! Glad you're back with us, cough and all - it's a the only way to get a seat to yourself on public transport anyway. xx

Amanda: ...or putting a plastic dog poop on the seat. Or a real one.