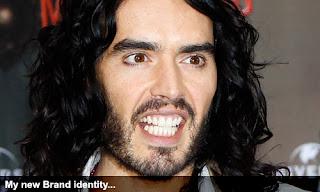 I’ve come to the conclusion that I am slowly turning into Russell Brand.

By this bold statement I mean that I have become hyper-suspicious of traditional news outlets and information that can in any way, shape of form be traced back to the Establishment (as opposed to sleeping my way around half of England, marrying Katy Perry and then divorcing her because my own incapacity for fidelity means I am unable to trust anyone ever to forswear all others in my favour).

To be honest, this healthy paranoid belief that we’re constantly being steered and lied to began decades ago. I haven’t bought a newspaper since the early 90’s. Well not to read anyway. Occasionally I have purchased a tabloid to get my hands on a free Lego set promotion but, model acquired, the paper is then dumped straight into the recycling bin without a single headline ever touching the sensitive ears of my conscious mind.

But of late I have even begun to doubt the veracity and the agenda of fly-on-the-wall documentaries and travelogues. Even those on the BBC in whose bosom I was once glad to place my trust without a second thought. I find myself asking: who has commissioned this programme? Why did they commission it? Why spend money on it? Just for my entertainment and to openhandedly inform my mind? I don’t think so.

Lord knows big global corporations, bankers and politicians have been playing commercial tonsil tennis for years but it really feels like the “free press” has become a fourth bedfellow. Information is just another currency to do dirty deals with whilst truth itself is a rare intoxicant who purity is besmirched the closer it gets to street level; something that can he withheld, diced, cut with talcum powder or cleaning fluid and then distributed according to the preferences of those in power, it's potency and power diluted and irrevocably lost.

Which leaves precious few outlets for the little man on the street to acquire credible information about what goes on in the world. Left, right and centre we’re being sold opinion – being told what opinion to have – but most of the column inches and sound-bites are nothing more than the conjectures and bigotry of a few mega-rich old duffers who seek to stroke the world into shape the same way they stroke themselves off in the shower.

It’s got to the point where my main news source at the moment is Facebook. Or rather various third parties who use Facebook to disseminate information, satire and political criticism. As underground information networks go it’s hardly MI5. And it could be argued that pictures of kittens, half naked celebrities and fake Mensa IQ tests hardly constitute the modus operandi of an all-seeing, completely unbiased oracle. In an age of information overload I’m finding the modern world curiously information-lite.

And that scares me.

In fact there’s too much going on at the moment that scares me: the dangerous dehumanizing rhetoric applied to immigrants and Muslims that is like something out of 1930’s Germany; the war against the poor and the under-privileged that the Tory’s are currently waging under the self-righteous, self-justifying banner of austerity; and the banking crisis that has never gone away but has not ever been adequately looked into… that has instead been allowed to roll on and on over all of our toes if not our legs. Breaking us all with our own money. And then beating us some more with our own money under the guise of fixing the damage.

Who is pulling the strings and pocketing the cash?

Generally speaking it’s not the people posting pictures of kittens on Facebook.

And for that reason alone they’ll get my trust ahead of some faceless corporate mogul running a newspaper empire or a television news channel.

And they can even write blogs.

Like I said, I’m slowly turning into Russell Brand…

I should try Twitter if I were you. You get a better class of propoganda.

Please don't turn into RB. He's unfunny and an arse. If his dick's as big as his ego there are quite a few women hobbling around today.

Barry: is that really true? Blimey. Me and Russ have more in common than I first thought.

I do, of course, mean that I am also an arse.

Why do you need information when you already know what's happening? The corporations are screwing everyone, the neo-Nazis are plotting to gas the Muslims and Mr Scrooge is stealing the milk from Mrs Cratchit's tits. As for Russell Brand, your understanding of how the world works is already more subtle than his, but he does talk about his dick with greater authority. Something to aim for, perhaps!

Gorilla Bananas: I think I might start taking my coffee black in future...

I read your opening sentence then had to stop so that I could mail you an envelope of anthrax.

If you're not ACTUALLY turning into him, just don't open that letter when it arrives tomorrow.

You'll know its from me because of the crayon.

'twas ever thus, just that we are more aware of it these days...

Rol: that was the weirdest tasting sherbet I've ever eaten. I'm feeling a bit thick tongued and bloated now.

Nota Bene: sadly we are getting to the technological stage where even ignorance can never be bliss.


"Who is pulling the strings and pocketing the cash?

Generally speaking it’s not the people posting pictures of kittens on Facebook. "

This is what I say about anti-vaxxers vs big pharma.

I know i just lobbed a grenade, sorry, not sorry.

Kylie: do the anti-vaxxers and pharma companies actually post pictures of kittens? Oh my God. That's disgusting. I feel like I've been mis-sold a PPI.

I just have horrible visions of the Tory government presenting themselves as kittens....
The power you have over our imaginations...

The fly in the web: not just imagination... https://www.youtube.com/watch?v=6v9IXwFb_cg!

I agree with Barry - Twitter might be worth looking into a bit further. The 140 characters stops the verbosity and you don't need to see kittens unless you click on the link.

Trish: I've never been able to get sufficiently into Twitter to make it viable. Everything gets swamped and I get tonnes of crap from people I'm not even following. It's like throwing pearls down a plughole.

Yeah, what everyone else said but funnier!