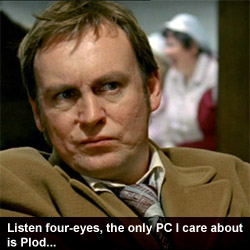 Absolutely cracking episode of Life On Mars last night. Gene Hunt (as always) got all the best lines:

“We’re making as much progress as a spastic in a magnet factory” and “You’ve got fingers in more pies than a leper on a cookery course” were two that stayed in my mind.

I do worry though that Gene Hunt is in danger of becoming a mere caricature of himself as opposed to a fully formed character – which would be a great shame and a waste of Philip Glenister’s talents. Maybe then it’s a good thing that the entire series will be concluded at the close of this one – it’ll prevent the show from slipping into the inevitable trap of self parody and creative laziness. Much better to quit while you’re ahead... and boy is Life On Mars way ahead of anything else on television at the moment.

A mere two episodes to go: just how are they going to end it?

Will Sam decide to stay in 1973 and make a go of it with the caramel voiced WPC Cartwright? I certainly wouldn’t blame him. Or will he awake from his coma into the straight-laced iPod PC world of 2007?

I have a theory that he’ll return to 2007 and find that everybody that featured in his alternative 1973 reality actually exist around him in 2007 – the Wizard Of Oz effect, if you like. It would make perfect sense as he’s constantly running into people that he knows or people who are related to people that he knows... his version of 1973 is constructed from people and places already known to him.

Or is that so great a paradox it would break the laws of the time space continuum forever?

By the way: Gene Barry Hunt. GBH. Get it?
Posted by Steve at Wednesday, March 28, 2007
Email ThisBlogThis!Share to TwitterShare to FacebookShare to Pinterest
Labels: GeneHunt, LifeOnMars, PhilipGlenister, SamTyler, television

They don’t necessarily have to tie up all the loose ends, though, as there’s going to be a spin-off series without John Simm, who will be travelling through time in a different show, with Gene Hunt going it alone and set in the Eighties!

Meanwhile, Philip Glenister has just launched a scathing attack on modern television, aimed particularly at soaps and the cruelty of reality programming. No one will listen, as he realises, because the people who run television are all stupid anyway!!

I think that he will return to the present but of course as you said there will be some kind of twist. But what a brilliant show.

As much as I want to see more Gene Hunt on TV the term "spin-off" sends cold shivers down my spine... in a bad way. I'm very suspicious of spin-offs as 9 times out of 10 they tend to be pale imitations and huge let-downs. However, I'll reserve judgement. I can't see Philip Glenister agreeing to a substandard script for anybody!

Much to my chagrin, I've missed most of "Life on Mars" since the first episode of series two! Mainly because I am now doing a night class on Tuesdays. But hang on...I'm on Easter break for the next couple of weeks...which means I should get to see the finale! Hoorah!!

I like your Wizard of Oz type theory. We'll see eh? I just hope it's a decent denouement and send-off for the show, considering all the intrigue that's been built up so far.

As for spin-offs, sometimes they work, sometimes they don't. To employ an example..."The Sarah Jane Adventures" seems a decent enough off-shoot from Dr Who so far, considering it's a kid's show being broadcast on CBBC! But maybe that's because Elisabeth Sladen is a decent actress and Sarah a strong character. "Torchwood" on the other hand is...erm...well not so good. We've all voiced our opinions on that one haven't we? Personally I think the "Dead Ringers" skits were better than the show itself.

Hmm... now there would be a fab show: Gene Hunt joins Torchwood! I'm sure he and Captain Jack would really hit if off big time!