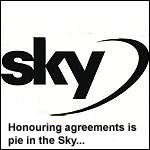 And who needs limitations?

I’ve been with NTL for about 7 years. I chose them mainly because friends of mine were with NTL and because as bad as their customer service always was they were no worse than any other UK ISP. They’ve now been taken over by Virgin Media... and although their customer service is yet to show ANY signs of improvement they’re still no worse than other ISPs. Same meat, different gravy. Better the devil you know. Etc.

Like most TV service providers, NTL (as it formerly was) featured a number of SKY channels on its TV packages. With the takeover of Virgin Media these channels have now been denied to Virgin customers because SKY and Virgin are apparently locked in some kind of age old bitch-fight.

So as usual the man on the street loses out.

Now, I don’t really give a rat’s doo-dah what their enmity is based upon; who drew first blood; what caused the row; who stole whose boyfriend / girlfriend / nanny goat – I just think it’s pretty pisspoor of SKY not to honour a longstanding agreement with NTL just because they’ve been taken over by a company that they have hissy fits about. It’s childish, pathetic and you know what else? Dishonourable.

How very big of you SKY, I don’t think.

Of course SKY is now pushing a major advertising campaign onto the UK to try and encourage Virgin Media users to defect so that they can once again enjoy the dubious delights of SKY One, SKY Sport and SKY Crapola.

Sorry?! You’re trying to kid me that you care about the customer first and foremost? That you’ll put our needs first?!

To tell you the truth, not being a sports fan and preferring to buy my own selection of movies on DVD rather than sift through the crumbs of SKY Box Office I never really watched SKY anyway. With the exception of not being able to watch Malcolm In The Middle re-runs the loss of SKY has impinged on my life not one bit.

SKY you can stick your TV channels right up your stratosphere. And while you’re doing it, why don’t you try and grow up?

P.S. By the way folks - this is my 100th blog. Hurrah!
Posted by Steve at Monday, March 12, 2007
Email ThisBlogThis!Share to TwitterShare to FacebookShare to Pinterest
Labels: MalcolmInTheMiddle, NTL, SKY, television, Virgin

Happy 100th post Steve!! You'll be catching up with me very shortly.

Just thought of a new Bev C. lyric, inspired by your post:

You light up another cigarette
And I straddle the satellite dish...

What do you reckon?

I guess it's no coincidence that I've just taken a swipe at old Rupert, in passing, on my latest post too! Before Dennis Potter died, he actually claimed to want to murder Murdoch, presumably for destroying televisual creativity as the author saw it, but didn't have the time preferring to finish writing "Karaoke" and "Cold Lazarus" instead!

Hi Old Cheeser, loved the Bev lyrics... definitely scope for a Bev opera I reckon too! The thought of Ms Craven getting to grips (as it were) with my NTL box quite tickles my funny bone...

Timewarden, it's almost a shame that Dennis Potter didn't prioritize bumping off Mr M instead. That would have been one helluva show!

I would rather buy the Lost box set than give SKY my money, I too am an NTL customer.SKY can bog off for all I care.