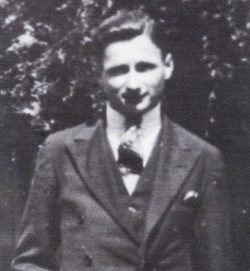 One good thing to come out of my aunt’s funeral was that it put me in touch with an old relative – one of my aunt’s cousins. Despite living in the same town all our lives our paths have rarely crossed. Or so we thought. It turned out that his window cleaning company cleans the windows at the building where I work and I’ve been signing off his monthly invoices for the last 7 years without even realizing who he was. The world is small.

I wonder if I have to declare this family connection now? Would there be a case against me for backdated nepotism? Ignorance is no excuse or so I am told.

Anyway, I filled him (Alan) in on the birth of Tom – or “Thomas Arthur” as my granddad calls him: the Arthur named for my granddad’s favourite elder brother… And it turned out that through other convoluted family connections Alan had long been in possession of some of Arthur’s old effects. His old army spurs, a combination lock and a cigarette case, etc. He very generously thought that as I was a closer relative than he was himself they ought to all belong to me.

This was very generous and a bright moment during a bleak occasion. We swapped telephone numbers and in all honesty I didn’t expect to hear from him again. Not because I thought he would welch on the offer but because, well, life happens and the first thing that usually gets swept accidentally under the carpet is a good intention.

But, to prove me gratefully wrong, Alan came good.

He rang me up last week, arranged to meet and placed these previously unknown family treasures – plus some wonderful old black and white photos of Arthur – into my care.

The items themselves are very humbling and I’m deeply indebted to Alan for parting with them so generously.

The spurs still go round though the leather is now very age worn and the silver is tarnished somewhat. The cigarette case – although only silver plated – is still a wonderful thing to own. It’s engraved with Arthur’s name and his batallion – the 271st - and contains a number of small knick-knacks. A gold crucifix, a medallion again engraved with his name and batallion number. And weirdly a Sacred Heart of Jesus pendant. My granddad is as nonplussed by this as I am as none of the family are or have ever been Catholic. I’d love to know how it came to be in Arthur’s possession.

And lastly the lock. The lock – I assume some sort of bike lock – is both magnificent and deeply touching. It’s rusted and I doubt it would lock anything securely now. But the combination still works after well over 75 years. Just put in my gran’s name – ROSE – and it releases very sweetly indeed. The fact it has so long carried my gran’s name, I find very moving.

Such details speak volumes for a family closeness that came to a sad end when Arthur was only 48. He died of a stroke and it apparently took my granddad a long while to come to terms with it. I can still remember my gran telling me (many, many years later – Arthur had been long dead before I was born) about the first time my granddad went into the local pub that he and his brother used to frequent without Arthur by his side.

He simply collapsed with the grief of it.

I shall safeguard these small family treasures for Thomas Arthur until he is old enough to appreciate their full meaning and care for them himself. In the meantime I’m merely passing them on very slowly, waiting for time to finish marching by.

That's a wonderful story, momentos are quite precious in the right hands eh? Thomas Arthur is a very lucky wee lad.

Yeah, I doubt they'd have any significance to anyone else but to me they mean a lot. I hope Tom will feel the same when he's older.

That's pretty moving. Awareness of one's forbears seems to increase with age and having children of one's own; if you haven't got the family research bug yet, I suspect you will.

I must admit I'm questioning my granddad about things with a renewed intensity these days, Brother T, especially as his memory is beginning to deteriorate... He's very much the last link to the older generation of my family.

Woww... that's beautiful. Those are pretty precious items he had, even without the memories - I'm sure Thomas Arthur will be very proud when you add on the stories when you give them to him.

Thanks Eve, I'm sure there were more personal stories behind the items that are now lost forever... but I shall do some digging around and see what else my granddad and my other relatives can recall.

Yes, you must question your grandad whilst he is still able to remember things. I did some family history a while back (mostly as a "cover" so I could spend time in London with Tracy) and it is very compulsive and strangely therapeutic. I always found that it helped to put all the daily ups and downs into perspective.

Thomas Arthur is a fine name. It is great to pass names down through the family.

Thanks Gina, the other amazing thing is that, as a kid, you had such a different idea of people and reality compared to what was actually occurring. I'm always intrigued when juicy tidbits of family history come to life that I had no idea about at the time...!