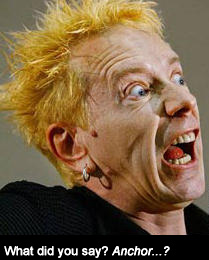 I can’t profess to ever having been a huge fan of punk, preferring myself the hippy undertones of Kate Bush or the soft pop synth sound of New Wave but I knew who John Lydon was and held a grudging respect – even amusement – for the man and his outrageous anarchist antics.

I still have fond memories of him flicking his V’s at the camera nearly a decade later on Saturday Superstore or Going Live or whatever woolly-jumpered guff the BBC was putting out on a Saturday morning back then. Cue pouts of outrage from Mike Read and Sarah Greene – how dare he besmirch our jolly kid’s show with his dirty punk fingers!

Meanwhile my sister and I were laughing ourselves silly like a couple of drains. It was almost as good as the legendary Five Star phone-in where an enterprising little potty mouth managed to slip through the BBC’s “real teen” censors and introduced kid’s telly to some rather choice four letter words. It was a remarkably succinct music review that has never ever been bettered in my opinion.

But I digress. John Lydon / Johnny Rotten was a somebody. He stood for something. He was spiky, dangerous and uncompromising. Values held in high esteem by any burgeoning teen / young adult.

So it’s depressing to note then that dear ol’ John has sold his anti-establishment ethos down the river in order to endorse / sell / promote Country Life Butter on our televisions. John loves Country Life Butter, you see, because “it’s British”. Cue clips of red buses, Morris Dancers and John himself in a nice tweed jacket sinking a large brandy in an old fart’s gentleman’s club. For a minute I thought I was watching the trailer for the next Austin Powers movie (John Lydon as Austin Powers: now there’s an interesting concept).

John what the hell are you doing? Surely your mortgage is paid by now? Why?

It’s one thing to be a national character...

Quite another thing entirely to be a national caricature.
Posted by Steve at Wednesday, October 15, 2008
Email ThisBlogThis!Share to TwitterShare to FacebookShare to Pinterest
Labels: adverts, BBC, childrensTV, food, KateBush, money, music, sellout, television

Well, it does seem a suitable product for him to be advertising. At least he will get to say one of his favourite words on prime time TV. They just need to change the spelling now - not sure Cuntrylife Butter is going to appeal to everyone though.

Oh I do so agree - I felt so disillusioned when I saw it.
What's next - Russell Brand advertising Pampers?

Kaz, the thought of Russell Brand in a man nappy (a nappy-wappy?) sends shivers of revulsion up and down my spine... not good. But as an adult advertizing campaign it just might work...

Not seen the ad, but Lydon's been a sell-out for years. Wasn't he on one of those ghastly celeb reality shows a few years back? And the ongoing Sex Pistols reunion tour turned into Spinal Tap ages ago.

Yeah that's true Rol... I seem to remember Johnny boy popping up on "I'm A Celebrity Get Me Out Of Here" a couple of years ago and revealing a passionate fondness for bugs and green leafy "nature"... The rot, it seems, had set in years ago...

it's odd to see a rebel influence doing something so non-rebelish...seems we always want to keep that image of them alive but are thrown into reality which is they do it all for the money...just right too...isn't that why we all work?

You've got a point, Daisy, I'd much rather be endorsing Country Life Butter for a few thousand pounds than coming into work everyday... but at the same time I haven't been as vociferous about my beliefs and my politics as Mr Lydon has over the last few decades. There's something sad about seeing him throwing his guns away rather than sticking to them... but maybe he's given away his entire fortune to anarchist causes and movements and now needs to earn his crust by endorsing butter? I'm sure there's a joke in there somewhere!

I couldn't agree more. I thought exactly the same when I saw the advert outside of Morrisons last week.

Spooky, I've just added 'Public Image' by Public Image Ltd to the playlist on my blog.

I have to admit that I'm a big fan of Mr Lydon. He's a bit strange and that's always a bonus in my book. I also loved the Pistols, but P.I.L. was his finest hour.

As for Russell Brand, well I'd like to see him advertising C4 explosives by strapping some to his chest, running into Lily Allen's flat and shouting "Anyone fancy a gang bang?!" before splattering himself, and Miss Allen, all over the walls.

Nora, John Lydon on a billboard outside Morrisons... that's deeply sad in itself. Next John will be doing the voice overs for M&S food or telling us on behalf of Tesco that "every little helps"...

Inchy, we share the same dream regarding Russell Brand though personally I'd be up for sparing the life of Lily Allen provided she proved herself useful in some way. As for Johnny, yeah I agree that P.I.L. were untouchable... sadly My L is now untouchable for all the wrong reasons...

My favourite inappropriate kids' TV moment was on Swap Shop, when a caller rang in to speak to Matt Bianco and said "Matt Bianco? you're a bunch of wankers!". Harsh I felt but possibly fair.
About Russell Brand, no words are strong enough to express my feelings of revulsion, although last time I said that my friend Kath said "Every time you say something nasty about Russell Brand, a fairy dies".

Matt Bianco were and possibly are a bunch of wankers. What a remarkably astute comment from one so young. As for Russell Brand... hey, the only good fairy is a dead fairy anyway. 20p a tooth? Who are they trying to kid. Rip-off merchants the lot of them.

not being a blighty-girl i'll have to rely on the images in my head.

actually now i'm getting flashbacks to Kate and Leopold where the gorgeous Hugh Jackman tastes "fresh creamery butter.." and just about throws up!

oh, and the last time i heard the name Johnny Rotten is where Colin Firth explains that he swapped his JR tshirt to get the hippie guitar...

It's Lurpak for me.

Never really a Pistols fan at the time, I appreciate them more now, simply for their raw energy. But, they only really recorded one album which doesn't last more than about 30 minutes in total!

I preferred New Wave, too. Not the soft side, more the crossover between Punk and New Wave such as The Stranglers, The Buzzcocks, Magazine, Siouxsie and the Banshees and XTC.

As for the butter ad, I still haven't seen it. Perhaps Johnny accepted the gig when he was feeling "Pretty Vacunt"!

Hi Kate, which just goes to show what a huge reference point Mr Rotten is for so many people... such a shame he is now working to undo all of that.

Tenon_Saw, I must admit to a passing fancy for Golden Churn...

TimeWarden, XTC, Siouxsie and The Stranglers I developed a taste for when I was a little older and a little more mature... before then I guess I was only really open to stuff that charted (though XTC did pretty well from their Black Sea album in that respect). I'd imagine John is feeling very vacunt at the moment but I'm sure his bank balance is looking full... provided he's not invested in in Iceland...!

I hear he got the job 'cos Marlon Brando is dead already....

As was Saddam Hussein... a shame, I'd have liked to see him try and keep his tache clean while sinking his big dictator's molars into a huge slice of hot buttery toast... I should have gone into advertizing, me.