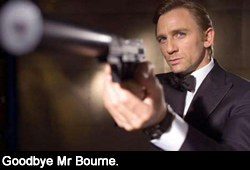 Karen and I reintroduced ourselves to cinema life last night by calling in our trusty babysitter, T, and heading off to see the new Bond movie "Quantum Of Solace".

"Casino Royale" had impressed us hugely – Craig’s taciturn but intelligent thug at last restoring the Bond franchise to something approximating its glory years when Connery was at the helm / trigger. Craig didn’t so much as hold the screen as pin it down in a head-lock, bloody its nose and then pour an expensive but rejuventating cocktail down its throat.

Viewers choked in ecstacy. Had Bond ever been this good?

But that was then. This is now. The question last night was: could Craig do it again?

Cut to the nodding dog from the Churchill adverts. Oh yes.

Craig has brought a good old fashioned physicality to the role that Bond had been missing for years. Since Connery in fact. Timothy Dalton did his best to give Bond a raw edge but he was too stiff, too stilted – the scripts didn’t allow for any depth or humanity in Bond’s psychological make-up. Dalton’s bond buckled under the pressure.

Not so with Craig. There’s a living, breathing human being behind the suit, behind the gun sights. One that is damaged, finding it difficult to process his emotions. His taciturnity is due to emotional trauma rather than robotic detachment. It speaks volumes as opposed to obscuring any sense of the man.

But it’s not overdone. Bond isn’t a soap and never should be. Bond’s inner feeling are very deftly, very lightly touched upon but never exploited for a quick bit of meaningless shmaltz. We see a flash of emotion but then it is masked – an action that in itself hints at a profound inner vulnerability – and then Bond (over) compensates with some breath-taking, "horribly efficient" violence. Bond hides behind his suit, behind his job. Behind his duty. His depths have complicated shadows and I’d much rather see those as Bond’s 'schtick' than Moore’s wetly debonair tailor’s dummy quips and eyebrow jerks.

I like the fact that there are fewer gadgets in this incarnation of Bond. The opening car chase is a case in point. No bullet proof glass. No missile launchers hidden behind the headlights. No oil jet hidden beneath the exhaust.

There’s a continuity to the plot that works too. It has the effect of widening the scope of the Bond world, fleshing it out. Gives it a much needed integrity. Nothing is happening in isolation. Some of the characters – both heroes and villains – reprise their roles from "Casino Royale". This both hints at and creates a sense of history, a sense of place. There’s a bigger story unfolding in the Bond world that isn’t going to be snappily concluded in the destruction of the bad guy’s base.

Because behind this bad guy is a bigger bad guy. Or in this case a whole group of them and there isn’t a white pussy cat to be stroked between them. Bond’s new arena of espionage and spy chasing owes much to the Bourne films, I feel. This world is muddy grey not black and white. There’s a tacit acknowledgment of double dealings by the UK government, paying off bad guys where necessary, funding coups, allies screwing each other over out of self interest that would have been unthinkable in early Bond movies. But these murky waters allow Bond to embody an amoral purity. He doesn’t do deals. He doesn’t care about the money. He hasn’t got a retirement plan. His methods are direct, irreverible and (cinematically) just.

He’s a rogue agent. But he’s our rogue agent and that makes everything alright. He’s both the underdog and the superior overlord.

Nobody can touch him.

But the impact can be felt from miles away.

We were similarly impressed by Casino Royale (and by 'we' I mean primarily my wife, who is a Bond addict). Nice to know we're not likely to be disappointed by the sequel.

You won't be. It hits the ground running and doesn't stop. It's not overlong either but they seem to pack an awful lot into it. Good Bond villain too.

Long time no speak. Sorry I ain't been around much but I'm now checking in to the Bloggertropolis lounge! Martini, shaken not stirred, please!

Blimey no white pussy in this movie then? Ahem. I read your review (incisive as always!) with interest - you make "QOS" sound worth seeing, for sure. I've recently read a few less than glowing reviews which said that "QOS" was adequate but not up to that much - very action-based with nothing much else going on. Also interesting that you mention the "Bourne" movies as that's what it was compared to.

I do like the idea of the continuity that you mention though (which we never really got in previous Bond films, save for the return of villains like Jaws) and given what happened with Vespa at the end of the last film it's no wonder old JB is feeling a tad p*ssed off.

Might still wait for it to come out on DVD before seeing it though...

Hi OC, feel free to pull up a chair anytime and help yourself to the nuts...! ;-)

I really liked "QOS". Compared to Casino Royale, it is a slightly softer film... but I actually think it's more dense and compact. I've never been a huge Bond fan (except when I was a kid) but Craig's Bond doess make 007 essential viewing. And more than that it make seeing a Bond film "an occasion" which is something they lost during the Moore years. I think the Bourne films have certainly made the Bond producers up their game but it shows in the photography and composition more than the plot. Old Bond locations had an everywhere and anywhere feel whereas the current outings manage to conjure flavours of places and evocations (if that makes sense). It's definitely worth seeing on the big screen, OC!

can't wait to see this one, it arrives in NZ in just-under-four-weeks and we'll be getting tickets in advance lol.
Bulldog is planning the whole SHAKEN NOT STIRRED thang for a group of us - yep, a martini experience at our local and then to the cinema!!!
(i am a chick-Bond-girl though - i have a soft spot for Pierce lol)
X

That sounds a wonderful idea, Kate, and the cocktail ingredients are listed in the film so you'll be able to see if they get it right! I liked Brosnan's first outing with Bond (the one with Sean Bean as the villain) but after that he looked a bit tired, like he was just treading water.

Last time I saw Daniel was in Munich - an excellent film.
Bond has always been a bit laddish for me - but perhaps I should try again.

The lad element is still there, Kaz: the cars, the guns, the girls but it's a bit more toned down and contextualized than it used to be. Plus Bond has got a soul; he's more humanized. The bed-hopping is kept to a minimum too and having Dame Judy Dench as M is a master stroke.

Now i can't wait to see it...wasnt really looking forward to it because i thought it would be the same thing over again...glad they bumped it up again...

Daisy, having a decent Bond is like having an old friend back. Admittedly one that will probably get all your mates killed and sleep with your mum and sisters (if they're lucky)...!

I'm very excited! can't decide whether to go and see it with Mr Fishwife (who will love the gadgetry and violance and, doubtless, Olga Kurylenko) or a friend with whom I can exchange hissed whispers of lust over Daniel Craig. Decisions, decisions.

Don't tell me: you'd been expecting him.

Lucy, why not choose both - and see it twice. Experience a double "oh" for your money. Sorry. Couldn't resist.

Weirdly Rol, according to the answer message on my telephone I'd been expecting Russell Brand...

I am not much into Bond movies but I do quite like Daniel Craig. But I am rubbish in cinemas - the minute the lights go out I fall asleep.

But I will watch it when it comes out on DVD.

Oh dear, I've turned into a goat today - far too much "butting" in this comment.

If you like Daniel Craig than it's definitely worth seeing - he really monopolizes the screen... but take a comfy pillow in case you do drop off!

Interesting that you say QOS is "softer" than "CR" - I thought, QOS was meant to be the harder package - finar, finar.

May well take up your advice and go and see it on the big screen, then. If I can drag my lazy ass down the flicks - never seem to have the time these days and by the time I do it will probably have gone straight to DVD! Mind, it only takes about a month or two after a movie's release for that to happen, these days! Ho hum.

And I'd love to help myself to your nuts, but what would Karen say??

OC, as long as Karen has access to my pork scratchings she'll be fine...! I think "QOS" is softer because it shows a less cocky (in every sense of the word) Bond - one still dealing with the death of Vespa - there are also eco-issues, poverty and sexual abuse themes running through the film too which brings out a compassionate side to Bond. For all that though he's just as lethal to cross...