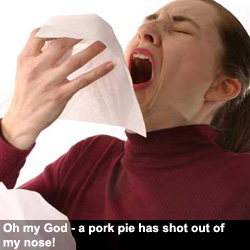 So it’s now officially a pandemic. Though not many people in the media are as yet using that terminology. All to spare us the degrading activity of panicking en masse I suppose.

Swine flu arrived on these shores with a great furore and hoo-hah and then almost immediately blended into the wallpaper as The Great Expenses Debate peppered the MPs in the Houses of Parliament with their own richly scented excrement.

We didn’t exactly forget about it. We just didn’t want to deal with it. Not really. We’ll deal with it later, we thought. When we actually get it or when someone we know gets it.

And like a game of battleships the shells have landed ever closer and closer and now we’re all starting to get a little bit soaked by the resultant spray.

Apparently the World Health Organisation (WHO) has recently decided to raise the level of influenza pandemic alert from phase 5 to phase 6. Not sure how many phases there are to go but it sounds very worrying. The number of flu related deaths has also increased. 14 so far in the UK according to one report.

People reactions to it have been bi-polar to say the least. On the one hand you’ve got people who have recovered from it shrugging their shoulders and saying it was no worse than normal flu and on the other you have people like the receptionists at my doctor’s surgery who, during a visit my wife made there last week, barred entry to a man who was panicking because he’d merely been on an airplane with someone who had swine flu. They actually kept him standing on the doorstep rather than allow him to come inside.

Despite all the information flying around the situation remains confusing. And confusion breeds fear far more effectively than keeping people well informed.

For my part – currently struggling with a sore throat, headache and a gummy ear – I’m not too bothered. I have no idea whether I’m coming down with a normal cold or the big SF and don’t care. A couple of days in bed sounds effing great. I’m otherwise fit, healthy and well nourished and am confident I will fight it off should it get me.

But my kids I do worry about. Ben especially is at risk due to his asthma. And Tom is barely 21 months old and has been hammered by every cold going since starting at nursery a year ago.

And still the water plumes rise ever closer...

It’s tricky. Do you wish to get it over with quickly or try to keep yourself disease free for as long as possible? Do you pray to get it now while the vaccine is still available and the doctor’s workload isn’t too great... or do you leave it until the whole country has come to a standstill and there are looters carrying off the latest iPods from Currys?

I guess it’s elementary. There is no choice. It’s fate. The will of God. Luck. Whatever.

You certainly don’t invite all your friends’ kids round for a “flu party” as some parents have been doing according to newspaper reports earlier in the week.

It’s one thing to have your battleship holed by a stray shell. Another to sink it yourself with your own guns.

Count yourself lucky you're not a hypochondriac.

Hypochondria...? My God, I think I have that too... I have all the symptoms... is it curable? Do I need pills? Will a couple of paracetamol cover it?

And thank you, Rol, for not commenting on the fact that I originally typed "alimentary" as opposed to "elementary"...

I haven't taken a lot of notice of it.

The people who have died appear to be those who have been quite ill to start with and would likely have succumbed to normal flu or, indeed, any viral infection.

The only element I keep a weather eye on are the reports that it could morph into something more serious.

AWB: that's been my view of it too - the deaths have all been due to complications arising from previous or concurrent ailments. The possibility of it mutating is a big worry though. Vaccines would be pretty useless if that happened.

Storm in a tea cup ..it's just a form of flu that is as benign as any other. Stick your head in the sand until they start on the next health scare. That's what I do but I can afford to as I have the constitution of an Ox.

Emma: glad to hear it - I think my own is pretty ox-like too. Let's just hope it doesn't mutate into ox flu, eh?

well - i've had the flu for a week - the first three days were chills and fevers (and a lot of feeling sorry for myself and making sure everyone else felt sorry for me too) and now all i have is an annoying cough cough splutter cough.
and i didn't go to the quack for a diagnosis, although provoked and threatened and oinked at on a number of occasions.

seven peeps have died in the antipodes at last count (tonight's news) and they all had underlying health concerns. the best defence for ben is to keep taking his preventative asthma meds and don't panic, mister mainwaring. 100 peeps die in NZ ever year from the usual winter flu. not to sound harsh.

Katie: sorry to hear you've been laid low with the lurgy but very pleased to hear you're recovering well. You're probably right I'm sure - the media loves getting people's knickers into a twist and I'm sure more people die from that than from anything else.

The furore has somewhat died down here. the fact that Japanese people have, without foreign contact caught the disease has stopped the media going with the usual xenophobic stance TG.
Personally I am worried that my curent non swine -flu consumptive cough will cause panic on my coming flight.

Missbehaving: indeed - you could be viewed as a viral terrorist! Seriously though - I do hope you're feeling better soon!

Reading this post yesterday must have given me the sore throat I now have today!

Well I would rather NOT catch Swine Flu, or indeed any other variety of flu, but I don't think there is anything at all we can actually do to prevent it. If it happens, it happens!
(Really must get around to rewriting my will though.....ho hum!)

Tenon_Saw: if it's spread by blogging that may account for the poor results the UK Government has achieved in confining it!

Justme: I'm thinking of buying a plastic bubble on ebay. I could roll it to and from work with me inside it like a hamster.

Steve, I am getting a bit annoyed with the way the Swine Flu beat-up is going. I don't believe it has actually killed anyone on it's own has it? I think your idea of a bubble is great, altho' I would respectfully suggest that you avopid getting one bubble for the family (roll your own?)...I think you're lucky up there in that at least you have summer happening. In these here parts with it being winter I suspect the 'flu (regardless of which strain, the usual one kills people every year too) will get its evil foot under many a door.

You crack me up. I'm now having visions of you rolling down the high street in a plastic bubble with your little legs going like the clappers trying to keep up with the momentum. Ha ha ha.


My daughters have asthma too so that would be my only concern if any of us get swine flu. I never get so much as a cold so I feel pretty much indestructible but the rest of my clan aren't made of such stern stuff. MS isn't catching so that doesn't count ;)

Amanda: here in the UK we've actually had our first non-complicated swine flu-death: someone croaked without having underlying health problems. I'm sure there'll be a few more to come yet - even ordinary flu carries off the otherwise hale and hearty occasionally. The fear at the moment is that the damned virus might mutate. The Gov are talking about a programme of mass vaccinations to protect the most vulnerable but haven't as yet specified who they are... but I bet the politicians will be on the list. I mean we can't have those poor sods ill on their back, can we?

KayDee: I've had no luck getting hold of a bubble on Ebay so am considering making my own out of a few Tesco carrier bags stapled around a frame made of bamboo. I'm sure it will work just as well with the added benefit of being environmentally efficient - recycling and all that. Actually. That's an idea - I wonder if I could get my bike inside? ;-)