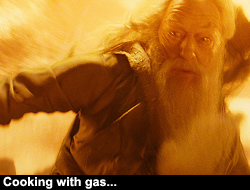 I took to the Harry Potter movies from the offset (yes, even with the occasionally irritating kiddy acting) but came to the novels late. In fact, up to the last movie (The Order Of The Phoenix) I’d staunchly avoided reading any of the books. I’d enjoyed the films so much I wanted my enjoyment of them to continue unalloyed and I didn’t want to join the miserable members of the “oh it wasn’t as good as the book” club.

However, the complete boxed set on Amazon last summer put paid to that and I ended up reading all 7 novels straight through in a matter of weeks.

So I went into this film fully armed with the gospel truth according to J. K Rowling and my membership card to the “oh it wasn’t as good as the book” club all ready to be stamped and issued.

And have I joined the whining members of that club?

I will say this though: the movie isn’t as full as the book – but then that is inevitable. Movies can never be as full or as all encompassing as the books they are adapted from. And thank God for that, I say. It is a fact that should be embraced. Movies are a different beast entirely and should be / must be accepted as such.

They are a different discipline. A new thing entirely. They are a filter, not a mirror.

And David Yates, the director of The Half Blood Prince, has proved himself to be a very adept filter.

The Half Blood Prince is an odd book. Unlike the other novels there is no overriding mission or endeavour – the book focuses on relationships, on romance with the activities of Voldermort (via Draco Malfoy) very much on the back burner. The threat remains hidden until the last scenes when suddenly the whole world comes crashing down with the shocking violence of Dumbledore’s murder.

Yates builds up to this nicely in the film – there is plenty of humour and laughs but the darkness is never too far away. The duel between Potter and Malfoy is short, brutal and bloody. The horror and shock of it is well handled – as is Malfoy’s attack on Potter in the early stages of the film. And yet I felt that Yates pulled his punch with Dumbledore’s murder. I felt that, compared to the book, it had been sanitized. A little fluffed. Instead of the sickening lurch of Rowling’s prose (that isn’t a comment on her writing style) we got a tasteful floaty-fall from the highest tower reminiscent of Gandalf falling into the mine of Moria.

It’s just a small gripe and is part and parcel of the whole franchise being aimed at kids I suppose. Or maybe I’m just being too bloodthirsty?

The only other gripe I had was that Snape’s part of the story (which is rather essential) was downgraded far too much in the film. He should have had way much more screen time but I’m honestly not joining the “Oh it wasn’t as good as the blah blah blah” club, honestly I’m not.

‘Cos these gripes aside I thought the film was superb and well worth the wait. Jim Broadbent was perfect as Slughorn and the usual triumvirate of Radcliffe, Grint and Watson were a joy. There is such subtlety to their performances now, especially Watson as Hermione, that their interlinked relationships carry the film without any apparent effort – they must look back at their performances in the earlier films and cringe. Bonnie Wright as Ginny Weasley stepped into the limelight as Harry’s love interest and exuded a strength and confidence which was a perfect foil to Radcliffe’s / Potter’s bumbling abashedness. She also should have been given much more screen time in my opinion.

It took me a while to get used to Michael Gambon as Dumbledore. Richard Harris had such a warmth about him that Gambon seemed cold in comparison but he seems to have softened himself into the role over the last two films. In The Half Blood Prince Gambon IS Dumbledore and I found his performance poignant and sensitive. The failing health, the fading strength, the acceptance of his fate was all there in the way he moved – which is something I have never expected from Gambon before. Suddenly in The Half Blood Prince I notice him as an innately physical actor rather than just verbal.

So. The difficult 6th movie is a success. As good as the last film? Hmm. I’ll be honest and say perhaps not. To be fair, it never could be. The Half Blood Prince is a scene setter. The final moves before the end game begins. The antechamber to the great hall of the finale.

Yates has set the dominoes up nicely.

I’m packing my mixed metaphors into an old kit bag and booking my seat on the front row right now.

I haven't seen this film yet, but had read the book as a bed-timer to our kids. The Stud took the Scowly Teen to see the film during the school holidays recently and I must say I'm keen to go and see it now! Funnily enough I was out at a meeting last night and when I got home The Stud and Teen were watching HP and the Philosophers Stone - laughing at the kiddy acting and generally doing a p**take!

I'm really looking forward to seeing it. I wanted to take my boys but we haven't had the time so far.

Amanda: I know the acting is cringeworthy in the first two films but they have a real charm about them and the camaraderie between the three leads is already established. I always found Hermione's wildly dancing eyebrows a real distraction - glad to say she's tamed them as she's got older!

Missbehaving: it's well worth making time for!

I've generally enjoyed the films. Haven't read any of the books although my wife and daughter have enjoyed them. My wife felt the last book was going through the motions a little; as though to finish off the thing now that she has made her money out of it.

I'm not keen on Daniel Radcliffe either. He seems wooden and I find the premise of him being special a little hard to believe.

Instead of a hidden depth all I see is blank wood. Some actors can suggest depth; I don't believe he can.

However, the other characters more than make up for it.

AWB: I know what you mean about Radcliffe but the Harry Potter character is in itself rather wooden and deliberately ordinary. Hermione and Ron are I think more deftly drawn in the books - I think Rowling relies too much on defining Harry by his circumstances and predicament than by his persona. As for the last book - I enjoyed it greatly and think it will be a real challenge to film.

my charlie saw it the day it was released in cinemas in NZ - he came home buzzing that, "it's the best movie i've EVER SEEN!!!"
can't wait for the dvd X

Katie: Charlie is clearly a young man of good taste and discernment. ;-)

Ahhh, so that's where you've been hiding... in the movie theatre watching HP over and over... will have to keep an eye out for it here, the two tadpoles in the house have been following these over the years, and I was sort of obliged to keep up. Can't say I'm a huge fan though, although I can see why they've been so popular. I guess nothing will ever replace the memories of Tolkien in this domain for me... Love your take on the "It's not as good as the book" crowd... haven't we all heard that one ?!?

Owen: I always find the cinema a great place to hide! ;-)

Funny how you never hear anyone say of books - it wasn't as good as the film! For us writers, it's good to know that literature retains its superiority.

I've got to wait to find a VO (version originale) in our neck of the woods. All films here -except for one or two - are dubbed into French and every well known actor from the UK or USA have their French voice double that remains until the original actor has either died or retired. People make a fortune from being 'the voice of Brad Pitt' for example.

Want to see it though - maybe a trip to Paris is in order.

FF: wow - being the French Brad Pitt sounds a great way to make a living!

The film is definitely worth seeing - a nice slice of summer escapism.

This is such a great resource that you are providing and you give it away for free. I enjoy seeing websites that understand the value of providing a prime resource for free. I truly loved reading your post. Thanks!

Anonymous: so essentially you're a freeloader who likes getting stuff for free? OK.