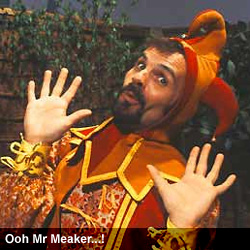 Yesterday morning, when I should I have been turning my thoughts to higher things, I indulged in a spot of Twitter based badinage with 2 fellow bloggers (you know who you are and so do my lawyers; you’ll be hearing from them later in the week) and the subject got onto eighties TV.

You don’t need to know how we got onto this subject because the route was circuitous and passed through some weird and wonderful country, within the borders of which I was imagined dressed up in a gold skirt like Freddie Mercury in Queen’s “I Want To Break Free” video.

Suffering under the barrage of cackling that thus ensued I decided to use the old distraction technique that Freddie Mercury taught me on the video shoot and came up with the true observation that some of my friends, back when I had a fuller beard, thought I resembled Mr Claypole from Rentaghost.

Much cackling then ensued and I thought, yeah, thanks, Freddie, great help you were.

But it got me digging around online for Mr Claypole related facts. Rentaghost was a great programme when I was a kid and Mr Claypole was every kid’s favourite character.

What is he doing now, I wondered, ‘cos he just seemed to disappear into thin air? Er, rather like his Rentaghost persona.

Well, it was a shock to discover that actually Mr Claypole isn’t doing anything very much at all at the moment because, just like the character he played in Rentaghost, he’s actually dead. He died in 1987!

For those of you brought up on BBC kid’s television this must come as a great shock.

I knew nothing of this. The poor guy has been dead for nearly 25 years and I didn’t know.

It’s like finding out that the original Bagpuss has been destroyed in a house fire or that He-Man had homo-erotic undertones.

It casts a dark shadow over your entire childhood.

I am indebted to www.cheesebrush.com for furnishing me with the sad facts of Mr Claypole’s demise. I feel gutted. I have the Rentaghost theme tune on my MP3 player and just hearing his voice singing the crazy lyrics now brings a lump to my throat.

The child in me is weeping. You’ll be telling me next that Roy Castle is dead. *sigh*

But on the bright side I can’t think of anyone else I’d much rather look like.

Especially when the same bunch of friends who thought I looked like Mr Claypole also made the observation that I looked a little bit like Gerry Adams. 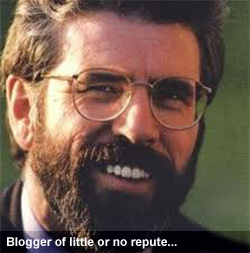 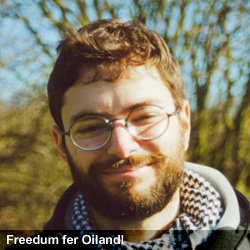 I feel for your loss and pain.

The only consolation I can offer is that like you Mr Claypole didn't know he'd been dead for 25 years.

I'm just imagining Gerry Adams on children's television in cap and bells...
On second thoughts, what about Ian Paisley for the role...

Barry: so my choice is that I can either look like a dead man or like one who dallied with terrorism...? I think I'll buy myself a gold skirt and make like Freddie Mercury.

I suppose now would be the wrong time to tell you about the rumoured Rentaghost movie... starring Russell Brand (shudder).

(Google it if you don't believe me.)

The fly in the web: he'd be more Mr Spamroll than Claypole.

But the big question still remains unanswered. Did you manage to track down the original costume and will you be joining us in Manchester in March whilst wearing it?

In fact, scrap that, I didn't realise how cute you were until the last picture. You can join us sans uniform if you like...

Heather: you're not getting your hands on my pig's bladder that easily.

Misssy M: it's the whole "sword of power" thing, right? And the hair?

Dead? Eh? 25 years ago, where was I, how did I miss this terrible passing.

Can I openly admit that I hated Rentaghost.

CJ: she must avoid all the florists in Wetherfield like the plague...

I'm too old to have watched Rentaghost - only just, mind!
But that big old pink and white pussy was always a favourite.

Trish: "that big old pink and white pussy was always a favourite..." - is that a reference to Mrs Slocombe on Are You Being Served?

Ok, I still have no idea what you're on about. Rentaghost didn't make it across the pond. So if your commenters hadn't backed up your claims, I would still think it one very elaborate story you'd made up around this one time, out with the boys after a night of debauchery and drawing smutty cartoons, you donned a ... joker's outfit, is it? ... and went to a photo booth. Because, mate, that really reeeeeally looks like you. Even more than Freddy in a black patent leather skirt and fluoro lippy.

Fabulous! and I am so pleased to see your avatar on twitter is now Mr Claypole!

Don't think I saw Rentaghost...
I wonder what kids will remember from todays tv?

Being Me: you ought to see me in a white leotard with diamond patterns on it, whanging a big mic about...

Michelle: well, I just thought; why fight it? Just go with the flow...

Libby: sadly all I think all kids will remember about today's TV is the endless product placement and the flashy ads.

You don't look like Gerry Adams. You look like a cross between Charles Hawtrey and a smug git with a beard.

Gorilla Bananas: I am only insulted because you saw it necessary to furnish me with a link to a picture of Charles Hawtrey.

They`re all talking rubbish .....you`re a dead ringer for a bespectacled George Clooney, any day! (I`m obviously showing gratitude for the `sneak peek`!Loving it so far...)

Nana Go-Go: a brown nose will always run further than a green one...! ;-) Thank you.

I have no idea who that person is nor do I know what the tv show - either I am too young *ahem* or perhaps it wasn't on in Oz. At least if blogging doesn't work out you've got an easy impersonator job you could pursue!

You don't look anything like Gerry Adams. I know, I've met him... but then the flaw in this is that I haven't actually met you, only seen your photo but based on that, no, I still don't see it. Mr Claypole? Rentaghost? Tis but a foreign language to me though I'm sorry for his demise and the obvious pain you feel. I'm sorry for your loss as they say in Oirland.

And for just a second there I thought you were likening your image to Shakespeare's... before I read the text.

Well, whatever, I'm sure you would have made a fine court jester had you lived at the right time.

I was enjoying the comments till I got to the suggestion about the white leotard - a step too far I think and a picture I am now having trouble getting out of my head. You do bear an uncanny resemblance to Mr Claypole. Love the new picture. And like Heather I think you look cute in that last picture too - nothing like Gerry Adams.

Hang on..what's all this about the white leotard with big diamond patterns...enough is enough...when do you arrive in Central America?

I have ladies queuing....

I'm translating all this to Costa Rican friends...their view of the U.K. is changing radically from that put out by the Embassy.

Bigwords is: I've always wanted to get into showbiz...

Wylye Girl: thank you for your kind words of condolence at this difficult time. Will yer come in fer a fry?

Mark: I fear our blogging association is at an end. ;-)

Owen: thank you... though of course many have commented on my similarity with the great bard... (i.e. people suspect most of my work is really written by somebody else).

Alienne: thank you, friend for life and woman of superb taste and intelligence. We can gloss over the white leotard.

The fly in the web: I'm hoping to bring much needed money into the UK by boosting our tourism trade. At least that is the trade I hope I will end up boosting...

I'm fairly sure dead is the new alive. Google it if you don't believe me (thanks for that line, Rol).

Amanda: that is sooo last century. Virtual life is the new big thing - everybody knows that!

As I recall I was both puzzled and delighted with Rentaghost. A fine programme

Löst Jimmy: you are unquestionably a man of fine taste and good judgement.

I have it on good authority that I look like a cross between Bryan Ferry and John Lennon or is that just wishful thinking?!

TimeWarden: either have a lot more kudos than Mr Claypole...!

i think you looky-likey him what plays harry potter.
no?

Hmmmm. Trying to picture you without your trademark facial hair...

LCM: it's not a pretty sight due to the scars I picked up in a Hell's Angels' initiation ceremony. They look bad but the bear came off worse.

I'm with Misssy. He-man? I think he's married to Bert and Ernie now. They've made a 3-way manwich.

Organic Motherhood with Cool Whip: manwich?! Nooooo! I'd hate to be the Big Mac caught between those Sesame buns...!