For those of you who don’t have access to UK terrestrial TV (terrestrial? Is that even a proper term that can be applied to the HD digital extravaganza that composes most TV channels these days?) Hilary Devey is the multimillionaire business woman with shoulders pads like two US aircraft carriers playing tug-of-war and a voice like Darth Vader smoking stinging nettles through an Alaskan oil pipe who co-fronts the British version of Dragon’s Den.

I’m sure most of you are familiar with the format of Dragon’s Den. Five fat cat business moguls laugh and sneer at the pathetic attempts of various bedsit scientists to come up with “the next big thing” and prise 100K out of their greedily mercantile little paws.

Well, Hilary is one of them. She’s a dragon. She’s the weird mumsy-esque dragon who dresses like an extra from classic mid-eighties Dynasty and talks like Phyllis Pearce from Coronation Street.

She also has a face whose resemblance to someone else has for years been on the edge of my consciousness but has never quite broken through. Until now... 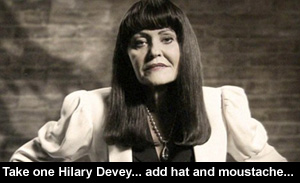 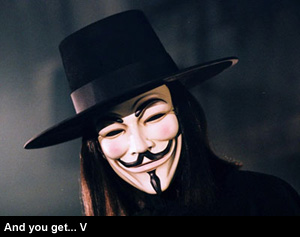 The likeness is uncanny. And I quite like the idea of Hilary practising knife-throwing skills around old London town whilst alliterating huge monologues around the letter V as she blows up the Houses of Parliament to the aural backdrop of the 1812 Overture. This was surely a casting exercise that the film makers of V For Vendetta are now kicking themselves for missing. They needn’t have bothered producing all those masks. Just give her a moustache and a smartly clipped imperial and she’s practically there. I bet she’s even got the hat somewhere in her own wardrobe already.

But for all I’m taking the urine out of this strangely Punchinello cheeked lady I can’t help but quite like her.

There’s something frail and human about her for all she expectorates Piedmont gravel every time she opens her mouth. I quite admire the fact she has made it in the male dominated world of business and made it without emulating (or even emasculating) not only the men but also the other women. Hilary is very much “out there” on her own. She is what people commonly call “a character”. A “personality”. She’s practically her own archetype. The anima of some weird medieval carnival god hand-carved by drunken monks on Lindisfarne as Viking raiders attempted to gain forced entry to their vellum lined inner sanctums. Oo-er.

Hilary appears to emanate her own completely localised biosphere. A Hilary Zone through which we – the denizens of the outside world – are filtered and interpreted before her formidable commerce-based intellect can fully ingest and process us. And if we are lucky, offer us 100K and her worldly-wise business acumen to ensure our new fangled, patent pending self-cleaning pooperscoop gets pride of place at Pets R Us.

Hilary is one of us. Slightly weird, slightly unhinged, more leftfield than Grayson Perry and with the bad dress sense and wardrobe to match. But she don’t care. Hilary is her own woman and does her own thing. She has cut herself adrift from fashion, taste and public opinion. The only thing that keep her moored to the plane of existence that we all share is her uncanny ability to make money. And, I sincerely hope, her unerring ability to throw razor-sharp knives at bent politicos.

Hilary, I salute you.

Long may you reign vainglorious and victorious at the vulpine vanguard of vicarious visual verisimilitude.

You're really scraping the barrel now, mate. I took one look at her face and said "Hagsville". If she'd been with the monks at Lindisfarne, the Vikings would have looted and pillaged while leaving the raping to their goat mascot.

Gorilla Bananas: I said I "quite liked her". I didn't say I wanted to scrape her sauce barrel with my love spoon.

That likeness is unnerving. Well spotted.

There's much to admire about her, especially the fact that she recovered from a devastating stroke a few years back but hasn't allowed it to slow her down in any way - she's still very much focused and driven.

Being Me: it was a true epiphany moment.

Funnily enough I'd never heard of her until today...and now she's been mentioned twice. She may give me nightmares...

No idea about the show, but I love your description of the 'Hilary zone'. Brilliant. A personal biosphere that translates the mutterings of the common man.

Ha ha Phyllis Pearce! I have a chest infection at the moment and was trying to think of who I sound like and it's her!!

Looks no worse than the men in the line up...from what I remember of them...but I like the makeover.

Nota Bene: she's coming for you... let's hope it's the incarnation without the moustache.

Wanderlust: I'm thinking of taking the idea to Dragon's Den.

The fly in the web: she sounds like them as well.

Well that's it Steve,. After that endorsement from you she's toast.

I quite like the way you used all those 'V's' made me feel special. Vx

Marginalia: but toast that's worth a few million quid.

Vix: you're so Vain.

Maybe you'll want some Vegemite on that toast.

Keith: as long as there's a hefty dollop of bromide in Hilary's tea.

I've been trying to get my students to use alliteration this week. You get an A*.

Rol: hope someone brings you an apple.

Have you ever seen the YouTube video of a girl called Vikki Stone who shows you how to become Hilary Devey. I think you should give it a try.

Trish: I'm not sure I could cope with all the pipe smoking...

She's terrifying ! Will probably be having nightmares after this !

A bit lost on me , but I smiled anyway

Owen: there are worse people than Hilary Devey to be having nightmares about...

The Bike Shed: that always makes it worthwhile.

You've put me off my dinner!

she has all that money and she still has a face like a bag of spanners... there's no justice in the world