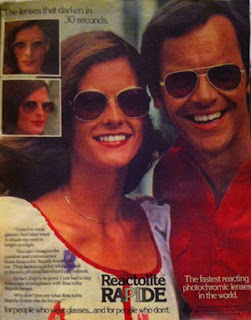 In many respects I was the author of my own uncoolness at school. It was at those times when I made a conscious effort to be cool that the gods of style and grace were laughing most loudly up their sleeves at me.

For the first time ever free from the stylistically limiting potential of standard school uniform and feeling confident enough finally to not let my mother buy all my clothes for me I made some unfathomably bad choices.

Corduroy trousers in blue, green and black. The black, colourwise, were probably the least offensive but nevertheless the auditory properties of corduroy meant I was accompanied by a “fwip-fwip-fwip” backing track wherever I walked. And I walked everywhere.

Blue and green corduroy also did not do much for my vaguely burgeoning goth tendencies.

And then there were my glasses.

I’d gone through much of my school career (a)stigmatized by the good ol’ never-let-you-down NHS spectacles that all children grow up hating. Even those who never have to wear them. Of course, Jarvis Cocker made them trendy years later but for me, with my school career firmly ensconced in the eighties, years before Pulp made a name for themselves, they were another burden on young shoulders already weighed down by the cheapest Burton shirts I could find.

But when I started 6th form I was given the opportunity to cast off the yolk off NHS speccyness for good. I could go for some proper metal framed grown-up ones.

My innocence and unworldliness meant I was easy fodder for the advertising industry and before I knew it I’d been taken in by those awful eighties adverts for Reactolite Rapide glasses. Spectacles that become prescription sunglasses the instant they are hit by even the tiniest light wave from the earth’s nearest star.

On the telly this was fine. Chisel jawed models sunbathing on yachts in the Med or quaffing Bacardis from the roof-top garden of a skyscraper in Madrid.

But not so fine on a white skied day in Leamington Spa.

Because what the adverts didn’t tell you was that Reactolite Rapide glasses could not be seasonally adjusted. You couldn’t turn off the ability to sun-glassify in winter. Or even when you were indoors and happened to be sat near a window allowing access to direct sunlight of varying degrees of intensity.

Reactolite Rapide glasses were not cool and never made me cool. They just highlighted and drew attention to my fundamental uncoolness.

To be frank, wearing a brown paper bag would have had the same effect but at a fraction of the cost.

Do girls make passes at boys who wear sunglasses?

It took me another decade to finally rid myself of hang-ups about not being cool, to stop trying to be anything but myself.

Once I managed that things came a lot easier. And not wearing corduroy helped too.

But even now, even on genuinely sunny days when I can feel my retinas crisping beneath an ultraviolet barrage, I still cannot bring myself to wear sunglasses.

I would rather squint like a nerd and not see properly at all.

Weirdly, the world is much better that way.

Amazing how the NHS look came back. Even wear a pair myself. Back then NHS glasses only came in half a dozen styles. Cords, yes I agree, but we are all slaves to fashion whether we like it or not.

Dicky Carter: I think I need to be unchained Django style.

There's nothing to stop you from wearing a wide-brimmed Panama hat to keep the sun off your eyes, though. Those who'd think you looked like a twat might well have thought so when you were bare-headed, so what have you got to lose?

Libby: where were you 20 years ago?

Gorilla Bananas: true. I lost my dignity years ago and my self respect has been lonely ever since. The two may as well elope together.

Fond memories! I had a pair. Rapide my arse. Go into the sunshine and you'd be blinded before the lenses darkened - to pitch blackness.

Enter a room from the outside and you had to stand still for 10 minutes for the lenses to accommodate to the new light levels.

So large was the frame that in the summer I looked like a panda. White around the eyes and a blackish face.

I subequently switched to contact lenses - an even greater faux pas.

What is all this hating on cords? I never got that memo. What does this mean? (ribbed velvet, if you translate from French) :0

Ah yes, the good old days. Just to make you feel better you weren't the only one to fall for the nasty trick of reactolights. I asked for the darkest you could get matched with the ugliest gunmetal grey Timmy mallet type frames. Still better than the broken brown "Nashies" held together with a plaster all twisted and mangled by their abuse with a bunsen burner.
Which sick sadist said that school days are the best days of your life!

Cords are super cool around here...especially cord suits. I cordially suggest you were just ahead of the times....but do buy some sun glasses, or a hat!

John: I was the biggest arse apparently but that was no comment at all on my metabolism.

Marginalia: really?! I thought contact lenses were the height of cool?!

English Rider: if only I knew about the French thing at the time. That would have made it cool. Actually, coming from me, no it wouldn't.

Nota Bene: I'm so far ahead of the game there is no point me playing.

Note to Steve:
1. I wear my sunglasses (ok, granted not those light changing ones) all year round. I'm as afraid of the light as Edward Cullen. Or Gollum. I always get those two confused.
2. I'm having intermittent problems commenting on your posts of late. Here's hoping this time it works!
3. Give in, wear your sunnies. Your poor weary eyes will thank you. Though possibly only silently because that would just be too bizarre if they actually came out and said it.

I bought a pair of white trousers that I wore to the school disco. This was the era of Miami Vice, but I was neither Crockett nor Tubbs - just a Crock of... and Tubby.

Though I never wore specs, I also had some ridiculous Tom Cruise shades... which was strange, because even back then I thought Top Gun was shit.

Being Me: heaven forbid my eyes should ever learn to talk... they never lie apparently. Just imagine all the shit that could get me into!

Rol: and did you ever feel the need, the need for speed? No. Me neither. I could never afford the stuff anyway.

I wear glasses, I'm sure reading gentlemen's art pamphlets as a young man the cause for my poor eyesight and the onset of hairy palms.
Wore cords to school, it was de riguer for a while. They were black, naturally

Löst Jimmy: I have no doubt that you made them look cool.

My mother in law got some new sunglasses from the optician and he told her she should wear them in bright light even in winter. I happened to drive into Tesco car park the other day and saw her and father in law walking across the crossing. She was holding onto his arm and wearing the sunglasses. I didn't recognise them at first and thought to myself, poor old blind biddy, best give her lots of time! Then she saw me and waved.

May I suggest a bee keepers helmet??

Trish: I think wearing sunglasses all year only works in LA...!

Amanda: is that some kind of euphemism?

I take the p#ss out of myself by wearing dark shades when I drive my convertible with the top down. It's there such a thing as ironic cool?

Mark: if you have a convertible in sunny weather you can be any kind of cool.

'Fwip fwip fwip' Ha ha, you just reminded me how much I hated wearing cords. Marti Webb sang 'plenty of guys wear corduroy pants', that must be why she was so sanguine about him buggering off then.

Reactolite Rapide was a cool name though... I imagine him in the Belgian 1982 World Cup squad.

Matthew: I bet the hand of God would be his speciality move. But if he wore corduroy shorts at least his opponents would hear him coming.