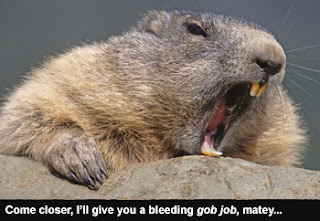 When beavers were introduced to Knapdale, Mid-Argyll in May 2009 I cheered.

Being part Scottish I could only celebrate with my far-Northern cousins that finally, at last, their beaver needs were being met. It is a little known fact that there has long been a shortage of beaver in Scotland. Some blame the Highland Clearances, some the proliferation of Buckfast and deep fried Mars bars, most put it down to the hordes of midge flies that are attracted to anything warm and moist. After all an itchy beaver is an unhappy beaver.

However, as the classic beaver spurns any kind of fashionable depilation, it was agreed that a good full musky pelt would be ample protection against even the most determined of hormonally driven irritants and therefore the whine and nip of insistent little pests would be “nay bother” to the eager beavers waiting to set up home in the west coast of Scotland.

The beavers were duly released and allowed to run free and to this day thrive and prosper in Knapdale, Mid-Argyll.

It is a story worthy of the BBC’s Springwatch. A conservation success story to be shouted from the rooftops although we are yet to see Chris Packham get to grips with a beaver live on telly despite Michaela Strachan’s best attempts to the contrary.

All should be well. Beavers and beaver jokes have been resurrected in the British Isles to the glory of all.

And then comes the disturbing news today that a man in Belarus has been killed by beaver. The beaver population in Belarus is an eye-watering 80,000. I’m not sure what ratio that is to the male human population but surely there is enough beaver to go around.

Details are currently sketchy but it seems the man had attempted to capture the beaver in order to have his photograph taken with it.

Well truly, what man has not savoured the adolescent dream of being photographed running his fingers through the quivering fur of a beautiful, perfectly formed beaver?

The poor man consequently died of his injuries.

Although “death by beaver” may sound to some a glamorous way to go I suspect my Scottish brethren are now twitching nervously beneath their sporrans and analysing growing beaver numbers in the Knapdale area with a sense of gnawing trepidation. Prime air-time on Springwatch is all very well but with a beaver population explosion on the cards it is only a matter of time before there is bloodshed in the Scottish bush.

After all, an angry beaver with teeth is not something you want erecting a dam at close quarters in your kilt.
Posted by Steve at Thursday, May 30, 2013
Email ThisBlogThis!Share to TwitterShare to FacebookShare to Pinterest
Labels: alcohol, BBC, beaver, British, ChrisPackham, death, kilts, MichaelaStrachen, nature, news, Scotland, sex, SpringWatch, television, UK

I've always thought beavers were a bit shifty. Not as shifty as sloths though.

Kellie: I always though sloths were a bit shuffly. They're a darn sight easier to run away from though.

The biting beaver of Belarus should be punished by giving it a Brazilian. I bet it would be nicer to humans if serving them were the only way it could make a living.

Gorilla Bananas: surely it would end up looking more like a Mohican?

I've been laughing the whole way through that post...great stuff!

And as for sloths...no problems. They only descend from their tree once a month to defecate and then climb back up again...slothfully.

When we visited Canada a few years ago my guide book warned about a health hazard in the back country - beaver fever. Didn't mention a cure: maybe a damp flannel does the trick.

The fly in the web: only being shat upon once a month would be a huge improvement for most Scotsmen.

Trish: or a cold shower? No chance of beaver fever in Scotland, then.

Wasn't that beaver in Eurovision for Belarus? I thought I recognized the teeth... either that or it's Luis Suarez needing a shave...

Don't beavers build dams? Is this a sneaky Scottish plan to get cheap electricity?

Nota Bene: if they wanted cheaper electricity they could build generators for the rivers of vomit that get spewed up nightly in the gutters.