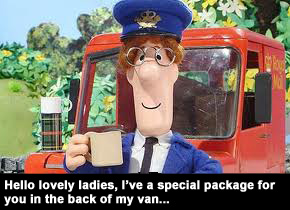 Due to my little boy’s insistence I happened to catch an episode of Postman Pat the other day. And you know what it’s like; when you haven’t seen something for a long time and then you are unexpectedly re-familiarized with it you suddenly find yourself noticing oddities, making connections where you never saw them before, seeing evidence of a huge and dark conspiracy waving its huge naked bottom before your face.

Something is not right in the state of Greendale.

The children first aroused my suspicions. There’s a high percentage of ginger hairedness in Greendale which is difficult to reconcile when there is only one adult in Greendale who blatantly carries the ginger gene: Postman Pat. He is the only Alpha Male ginge in the entire area.

And this begs the question: just what kind of package is Pat stuffing through the letterboxes of all the ladies in the town? Is he siring a whole generation of little posties while he does his rounds? To paraphrase the theme song: Post-man, Postman Pat; we can guess what’s in his sack.

But it doesn’t end there. Or rather it doesn’t begin there. Because this wild sowing of the red haired seed plainly isn’t limited to the Greendale youth. Check out some of the older generation too. Mrs Goggins for example. Such an innocent grey haired old lady. But she’s obviously on intimate terms with Pat. Just a family friend you might say. But look again. If you imagine her hair as once being red she is suddenly a dead ringer for Pat himself. Their faces are virtually interchangeable. Now, she’s either Pat’s secret mother, his older sister or his prematurely aged daughter.

Either way the gene pool in Greendale is tighter than Jimmy Carr’s accountant’s wallet.

And there’s very little new blood that comes into the town. Sure, Ajay might drive that train in and out of the station all day long but there’s never anybody on it. No one ever gets off at Greendale. There’s just the locals. The same faces, day in, day out. And all those ginger haired kids who all have Postman Pat’s nose.

I’m telling you, Greendale is like Craster’s Keep in Game Of Thrones… with Postman Pat himself being the only single dominant male allowed to breed. A couple more series down the line and Greendale will start to see genetic defects manifesting among the populace – elephantitis of the limbs, mental disorders, a rise in Greendale suicide rates (especially when the kids put two and two together and realize they all have the same father as their own parents).

I may have to ban my boy from watching the programme way before then. We’ll certainly have to bail out before the riots start and the inevitable highly sensationalized tabloid news coverage.

I really don’t think this type of thing should be allowed on the BBC.

Thank God for Bob The Builder… He only has intimate relations with his cement mixer.

I'd check the town for escaped orang-utans before jumping to conclusions. Or Mick Hucknall, to put it another way. Are there any bearded men in town?

Gorilla Bananas: another excellent point. No bearded people. Further proof of both a distorted gene pool and weird social hierarchy.

You and your perverted mind - you can ruin anything!

Rol: I was going to try the Bible next but the church got there before me. Boom-boom-tish!

Oh I did smile at this post..I needed it


Now I think about it here used to be a line in teh theme song that said 'special delivery' - clearly he's been making those for many a many a year.

Surely it's Mrs Goggins not Scoggins, although latter sounds better I think!

Gingers are taking over, first Greendale, then the world.

Judging by the shape of his head, I would guess the gene pool is already pretty damaged...any thoughts on the black and white cat?

The Bike Shed: no, you're right. Mrs Goggins it is. He's had so many women I just can't remember all of the names!

Very Bored in Catalunya: how many times does your postman ring the doorbell, hmm?

Nota Bene: oh please. Not bestiality in Greendale too. That's too much. Though it has to be said that Jess is often found playing with Pat's sack.

You have a very peculiar mind sometimes Steve!

Libby: 14 years in local government can do that to a man.

Given our generous sprinkling of ginger up here in Scotland, I feel rather unsettled now with regard to our village's breeding habits.
Thanks for planting those seeds.

Craig: does your postie always have a black and white cat with him?

No wonder Pat is a 'really happy man' as the song goes. All his special deliveries seem to be 'early in the morning, just when day is dawning' - no-one about then...