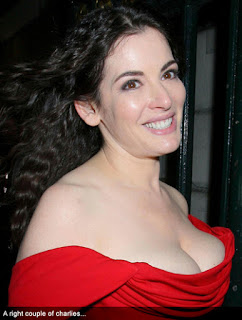 I've written frequent posts about Nigella on this blog. Originally because I quite like the cake-making queen of tease and then later because I was quite happy to acknowledge that she was good for my stats. Even now "Nigella Lawson hot" is one of my biggest referral terms and with her name once more in the headlines I'm receiving more hits than usual.

Are these new visitors seeking edification and information? Or just a nice picture of the curvy brunette spilling o-er her cups? I suspect the latter but that's by the by.

I kind of feel I owe Nigella's current predicament some kind of comment even though I'm sure she would rather I kept my nose out of it (no joke intended) as at the end of the day the accusations of cocaine abuse are nothing at all to do with me.

But of course this hasn't stopped the world and his dog offering a multitude of opinions on what are as yet unproven accusations by her embittered and estranged husband. Do you think he might be biased in his attempts to discredit her?

Part of me thinks that this story is not at all in the public interest. What goes on behind the closed doors of a marriage should stay behind those closed doors. But then I daresay Mr Saatchi would like to have used the same argument when the infamous throttling story hit the headlines. Though of course he did this in a public place not in the privacy of his own home. Or should that be "allegedly as well as"? And to be honest, domestic violence should never remain hidden away in the dark where it can be allowed to grow and spread like a virulent fungus.

But being a public figure, of course, makes almost anything at all that happens to a celeb "in the public interest". For me the idea of "public interest" has long taken on a moral dubiety but we'll leave that aside.

I hope the accusations of Nigella's cocaine use are false. I haven't read them, I must admit, or even watched the news. And yet somehow, via social media and gossip, the gist of the story has spread. I find it hard to believe that a ten year cocaine habit could have gone unnoticed and gone uncommented upon for so long. Mr Saatchi claims he has only just found out. What a truly dreadful husband he must be then. (1) Nigella turns to drugs (I surmise) to make life with him more bearable, (2) he's so dreadful he doesn't even notice and then (3) he increases his dreadfulness by bringing it to the attention of the tabloids and throws the kids into the mix at the same time. What a wonderful husband and father he must be. Even if we could waive aside the sundry acts of domestic violence.

Cocaine is a distasteful drug. It makes arseholes out of all who use it and bigger arseholes out of those who are already arseholes. Nigella has never struck me as being an arsehole. Of course, I could be wrong - I don't know her after all - and chasing the white rabbit could validate the myth of Nigella's constant munchie-runs to the fridge for midnight snacks as perpetuated by her many cookery programmes.

But I'm hoping Mr Saatchi just can't tell his icing sugar from his Esnortiar. Despite being married to Nigella for years he doesn't strike me as the kind of man who spends much time in the kitchen but would certainly have seen talcum powder being smudged across a glass topped coffee table from time to time. Any white powder at all is going to produce a big knee-jerk reaction from him.

Personally, next time I would recommend he try Tetramethylenedisulfotetramine.

After all, if Nigella has a rat in her kitchen, what's she gonna do?

If I read your posts for no other reason, it is to increase my vocabulary.

Colin: I'm a devil at Scrabble.

Well I don't much like Nigella (and I'm 90% sure she's frigid), but I wouldn't believer anything that throat-grabber said about her. Can't someone grab this throat to find out if he's lying?

I hope it's all nonsense too, but like you say, who knows what really goes on

Gorilla Bananas: in any case where it's throat-grabber versus cock-tease the cock-tease always gets my vote too.

The Bike Shed: at the end of the day Mr Saatchi appears to have bandied about allegations without any proof at all (which he has admitted). If nothing else that proves his reprehensibility.

Hasn't he now said he never saw any evidence of a drug habit or in fact any sort of drugs at all. In fact his latest spewing is about how much he loves her. It's all part of his abusive personality IMHO. Domestic abuse takes many forms, not just physical. There's lots of help people like him can get, not that he will of course. Some great words in here Steve!

Wylye Girl: he done her wrong and he's doing her wrong. He either needs therapy or a visit to the knacker's yard. I think he should leave his body to medical science: an example of a selfish, heartless bastard.

I think he should give his body to medical science now...while still alive.
Manipulative brute.

I'm not keen on either of them - note the criminal and civil actions against the P.A.s - but he wins by several lengths in the unpleasantness stakes.

The fly in the web: the entire debacle is unpleasant. Like an appalling recipe.

I agree with The Fly In The Web. Never really had terribly much time for her before but he has effectively shattered any reputation she had built by dragging her through the mud unfairly. They've become a sad media circus these past 12 months and I don't think she is to blame.

Being Me: her next lot of programmes might end up being an adaption of The Cook, The Thief, His Wife And Her Lover...

No wonder she finds so much comfort in Whittakers chocolate.

Lady Mondegreen's Secret Garden: I wouldn't mind snorting up a line of that myself.

Wanderlust: there's a lot of it about apparently...

This is yet another example of my frequent soap box rant of NOT NEWS. As you say, it is just between the people involved and if they were just any old couple in the bitter wrangling of divorce and aftermath and such no one would even bother.

And in as much as it seems to have no adverse affect on the recipes she advocates, or the art he collects then who give a shitake ?

Yeah wouldn't ten years of cocaine leave you with a hole in your septum? Only time will tell whether the domestic goddess has truly fallen from grace into a pile of white powder or whether this is another fantasy story written by the gutter press.

MommyHeadache: of course, most men tend not to look as high as her nose...

It's an unholy squabble...and all seems pretty one sided. Suggest she keeps her head down and rides it out. There are more important things for us all to worry about.

Nota Bene: yes, like what exactly are the ingredients to Nigella espresso?

The lives other people live.

If the Grillo sisters (assistants to Nigella) lacked proper employment contracts stipulating what they could and couldn't use their business credit cards for and a cap on the card amount they could run up, then Saatchi has no case. Unless Nigella wants to go after them for blackmail over her alleged drug problem.
Saatchi is a very rich man who can easily shrug off a mill or two, and will probably spend more than the sum lost in pursuing this case. Either he's out for revenge against Nigella or he's a particular pedant about 'principles'. In which case he should have made sure the safeguards were in place before letting his wife's assistants loose with his business credit cards. Not a nice person anyway. But apparently the Lawson family are not very nice either (and I know someone who knew her ruthless brother Dominic well). To Nigella's credit however, she has done her best to maintain a dignified silence about her very public marital split until now, which is more can be said for Saatchi.

Laura: you're much better informed about it than I am; I've steered away from all the news guff. That being said I've just caught the bit today about Nigella admitting to taking coke (but not regularly) and I do feel disappointed. Which is very judgemental of me. On balance though her ex is being the much bigger shit.

If my dad was Nigel Lawson... and then named me after him, especially if I were a girl... I'd take hard drugs too.

Rol: if my dad was Nigel Lawson I could afford hard drugs. Period.