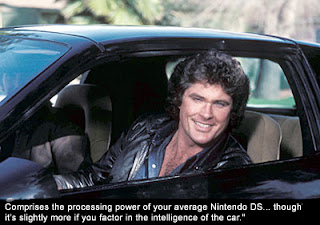 It is a well-known fact that the average domestic washing machine has more processing power than NASA’s Voyager 1 space probe. And it struck me the other day as I watched my boys play on their Nintendo DS’s that it must surely follow that there is probably more computing power in those annoying little games consoles than the original producers of Knight Rider could have ever envisaged for their crime fighting super car, Kitt, in the 1980s.

And then my own internal CPU got to working… What would happen if we brought Kitt bang up to date with modern computing technology (and conveniently ignored the fact that some daft producer in the US actually already did that in 2008)? Would Michael Knight and Kitt actually benefit from modern social networking and broadband Wi-Fi?


“Kitt, I need all you got on Mr Big – prison records, Interpol logs, all known connections to any terrorist cells!”

“Sorry, Michael, I’m playing Angry Birds on Facebook. How about if I PM him and see if he gets back to us?”

“Goddamn it, Kitt, I need that information now!”

“OK, Kitt, let’s get Mr Crimelord down to the precinct. He’s gonna be banged up for twenty or my name’s not Michael Knight!”

“Sorry, Michael, I refuse to help you arrest that man.”

“He’s one of my connections on LinkedIn. I need him to endorse me for crime fighting and high speed car chases.”

“So in his case you’re not going to fight crime so that he can endorse you for fighting crime?”

“That does not compute. Screw you, Michael. I’m going to Tweet that you’re a pedantic, crime-ist asshole.”


Or what about during a high speed car chase and Michael presses the much loved (and completely over used) Turbo Boost button?

Michael starts hammering the Turbo Boost button with his fist. “Jesus – the bridge is out! I need that Turbo Boost now Kitt! What the hell’s going on?”

The imaginary world of my teen-hood would have been so disappointingly different if I knew then what I know now.

If Pamela Anderson were on Facebook, would she notice if you poked her?

I think the Gendarmerie must have got there before you....they must have been buffering 24 hours a day...

Gorilla Bananas: I could poke her with a jumbo jet and she wouldn't notice.

The fly in the web: it all depends on the type of (French) connection...

Suburbia: I was thinking Dave Myers could be the new voice of Kitt...

I think you should make it!

Laura: I just need the car and the perm.