Red In Tooth And Claw 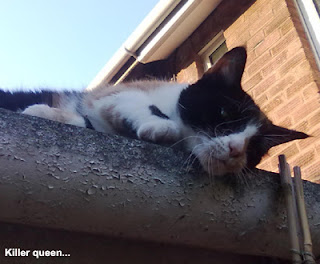 To continue the animal theme (my last post was clearly flogging a dead horse) I’d like to impart a small tale to you of feline derring-don’t.

One of our cats, Missy, were she to be human would undoubtedly be a blonde bombshell. She has the feline version of Hollywood good looks and “salon quality hair”. Beautiful markings, well-proportioned and the ability to turn on the charm, she is hot and she knows it. I have no doubt that should the unknowable gods of the cat universe suddenly bestow the curse of humanity upon her she’d make a nice living for herself as a gold digger.

As it is, she is completely pussified for the moment and, due to the soft touch nature of the humans she allows to exist in close proximity to her utter greatness, lives the enviable life of riley.

One of the feline rights she lays claims to is the right to physical elevation.

The implementation of this right entails a fortuitous combination of her inherent ability to leap many times her body length in height and my ability to not move out of range fast enough so that my shoulders provide a convenient, cat sized landing gantry.

You get the picture I am sure: in a previous life I was a pirate (possibly Black Beard, probably Cap’n Unknown) and Missy was my parrot.

On the whole I put up with the re-appropriation of my shoulders with a good spirit. Having a purring cat nuzzling your face tends to win over even the hardest of hearts.

But. I do draw the line at Missy’s shoulderobics when I am (to quote an old saying of my grandfather) “pointing Percy at the porcelain”. The thought of Missy – ever so surefooted 99% of the time – mistiming her jump and sliding down my frontage, claws out while an intimate part of me is about its work and in her direct line of descent makes me very wary of allowing her onto my shoulders when I am making my intimate water.

So I show her the hand. Literally. I put my palm into her face and directly block off her angle of launch. This has the result that she hovers on the bathroom sink, ears back, looking very peed off while I pee. Normally.

Not so last Saturday.

Last Saturday Missy got tired of “talking to the hand”.

Last Saturday Missy thought “sod it” and launched herself anyway.

Last Saturday Missy somehow managed to bypass my palm, make a failed attempt at entering geostationary orbit and impossibly hook a claw into the inside of my lower lip. Thankfully her purchase had not bitten deep and a split second later saw her disengaged and in freefall to the floor while I cushioned her landing with some robust air-filled expletives.

End result: sulky cat for the rest of the day and me with a cat scratch inside my mouth that had miraculously all but disappeared by teatime (the scratch that is; not my mouth – despite my wife’s fervent wishes to the contrary).

Still, it could have been worse. I could have ended up with a lower lip like Mick Jagger at a gurning contest. Or, worse, no lower lip at all.

And at the end of the day, thanks be to high Heaven, Percy was unmolested. Because that was still the priority, OK?

It’s just like my unmarried Aunt Ethel used to tell me: Percy’s and pussies don’t mix.

And with that sage advice a-ringing in my ears, I shall be keeping the bathroom door very securely locked in future.

What a shame! After such a trying experience, to get to the end of the day and have Percy unmolested seems such a dismal end to a dismal day.
Oh hang on, I think like Missy I missed the point!
Ooh, no, ...what I meant was...
oh forget it.

What the hell is she doing in the bathroom to begin with? Spray her with water until she flees and shut the door behind her. I mean water from the shower rather than your bladder - you don't want to ruin her social life.

Joe: take it from me, a pussy with teeth is not a fantasy you want making real.

Gorilla Bananas: spraying her with man scent may only have the effect of encouraging her to do the same. And then before you know it the whole house smells of pee. Though your idea might work on the children.

Percy and pussies don't mix?
Eh? I always thought that's they did

John: context is everything.

I recall tiny kittens climbing upwards paw over claw-garnished paw, much like mariners headed up the rigging of a sailing vessel. It was cute for a short while, until they got bigger and heavier. As we tap danced from room to room in an effort to defeat them, they would throw themselves at a thigh or a buttock and lock on to begin their climb anew. Much shrieking and swatting ensued.
I'd forgotten all about that.
Can you remember a house without animals?

English Rider: before the children yes... ;-)

And oh yes. The thigh climbing. We get that too. And to think I thought falsetto beyond my range.

Sublime! Missy sounds a real card! My visiting cat sticks his paw under the door in protest when I lock him out of the bathroom!

Love your unmarried aunt's advice! Perhaps taking it is the reason she never married. ; - )

Laura: the fact she doesn't really exist won't help her chances much either! ;-)

Nota Bene: if you're making a proposal of marriage I can tell you now you're going to be disappointed.

Cats. You'd never have to put up with those shenannegans from a dog. Had to laugh at the disappointed wife about the not-disappearing mouth line.

Being Me: we're actually considering getting a Red Setter. If I thought for a moment they got up to this kind of shenanigans...

( In anticipation of hate mail. )

Keith: yeah but they got all the best tunes.

Oooh you're all different from last time I was here - I like it. As for the cat, I always knew there was a reason I didn't have one. Next time my sons badger me for a pet kitten I shall show them this post.

Gappy: if they're still not swayed I can show them the inside of my lips.

Marginalia: if her claw had made contact further down her descent it would have been a hell of a lot nastier.