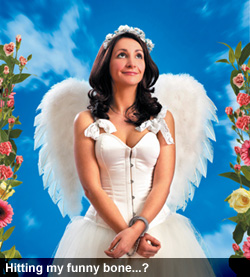 So the BBC is determinedly flying the flag for women’s rights. It is going to outlaw all-male comedy panel shows.

Instead of a boorish line-up of testosterone heavy, self-opinionated satirists we’re going to have some women thrown into the mix. Proper women. Not Lilly Savage or Dame Edna. But real bona fide women. Comediennes.

I’m sure this new stance has nothing at all to do with the recent slash and burn effect of Operation Yewtree on the BBC’s standing as a noble bastion for equality and fairness. This is something that has bugged the BBC for a long time; it’s something they have always wanted to address and by golly they are finally going to do it.

And I think this is fine. This is a good move.

Except a few writers / journalists / commentators have asked the question: are women going to be asked to appear on these shows because they are funny or because they are women? If it’s the latter then is gender equality really being served?

But, the thing is, how does one judge “funniness”? How is it determined and measured? Because, to be honest, a lot of the male contestants on these unspecified panel shows don’t strike me as being particularly funny at all. Ross Noble, Johnny Vegas, et al leave me cold. So were they invited to be contestants because they were funny or just because they were men and “big TV names”?

Because aren’t there possibly more male big TV names than female big TV names in the first place simply because showbusiness, like every other industry, is traditionally weighted in favour of unthinkingly promoting male talent over female talent every chance it gets?

My point is, if nobody is asking “are they funny” of the male contestants before inviting them onto a panel show then should it be seen as a deal breaker for a comedienne? Why is the question even being asked? If they are professional comediennes, making money and a career out of performing their own comedy routines, surely that is the only prerequisite answered?

Humour is subjective. There is no way to benchmark it. At the end of the day these shows are simply star vehicles; there are a means of exposure for up-and-coming and established artists. And if women are being under-represented then that is wrong and it needs addressing.

We viewers at home should have the right and the opportunity to judge for ourselves. All-male panel shows deny everybody that opportunity.

I am SO bored with TV comedy panel shows. They have had their day as far as I am concerned and even all-woman comedy shows will not get this viewer tuning in.

Laura: fair do's! To be honest, nothing beats a decent documentary anyway...

Women are funny if they're Jewish - Maureen Lipman, Joan Rivers, Ruby Wax. Forget about sexism, what we need is more racism. And more men with beards because no one takes them seriously.

So to fit in with the style of the shows will the women have to be loud and boorish as well?

Gorilla Bananas: everyone is funny if they're Jewish. With the exception of Woody Allen.

The fly in the web: why should the men have all the fun?

"Everyone is funny if they're Jewish." You forgot Jon Stewart.

Panel shows have been SO done. I totally agree with you, the first question should be 'are they funny?' The only thing that makes a panel show worse is an unfunny panel on a panel show.

Being Me: we mustn't forget the comedy enhancing effects of canned laughter.

I think we should have lots more panel shows all made up of Frankie Boyle. They would certainly spike the ratings...that is the point isn't it?

Nota Bene: being a dedicated Boyle-ite I couldn't agree more. But imagine if he was a woman...!

I blogged on this very subject a couple of days ago and decided that panel shows were the actual problem and any that reached double figures in terms of series needed canning.

There are women on HIGNFY, Victoria Coren is on a fair bit but since they shoot hours of footage and edit it down, she's often reduced to a simpering chuckler at a MANS joke, which is a bit tiresome. The whole format is lazy and tiresome to be honest. We've got staff here younger than HIGNFY for goodness sake.

Oh, and I was astonished to find out Susan Boyle is Frankie's mum. Who'd have guessed it?!

Alex: seriously? That explains the character defects of them both. As for panel shows I must confess to enjoying 8 Out Of 10 Cats Does Countdown and Would I Lie To You. Mock The Week raises a few chuckles but Frankie's absence has left a huge hole. In the shape of Chris Addison.

PMSL at Alex. Although I do think that Victoria Coren comes across very well on HIGNFY - one of the few panel shows I enjoy.

This is a bit like the argument that there should be more women on the board for companies - but for me, this only serves for the women who have got to the top to be belittled by people saying they only got there because of their sex!

I would like to see more female comedienes on TV, simply because I find Sarah Millican's laugh annoying, but doing different things than boring chat shows and panel shows.

Very Bored in Catalunya: I think Victoria Coren is several kinds of wonderful and I must admit I quite fancy Sarah Millican too. Hey ho. This is why I'm with the BBC on this one. More eye candy.

Er. Or does that totally devalue my original argument?

Vote with your feet....walk away from the TV

English Rider: it's so difficult when I can watch TV programmes on my mobile phone.

The panel shows, male, female or otherwise have had their day. It's time to move on to the next level - show trials of politicians.

Löst Jimmy: with a Wicker Man style ending? Yeah. I could go for that.

I watched Dara o'Briain being interviewed on TV last night about this subject. He said they would love to have more females on Mock the Week but as they need stand-up comedians, and there are so few females in that area of comedy, it is heavily weighted towards men.

I don't really think about whether someone is male or female when they are making me laugh.

I was thinking more like a vat of hot wax ala Carry On Screaming; the show's host could even holler "Frying Tonight!"

Trish: I like Dara but I don't think his argument holds weight. They frequently have non-standup comedians - David Mitchell for example - and not all of the comedians take part in the standup round anyway.

Löst Jimmy: I like it. All we need is a modern day Fenella Fielding and the show is complete!

It's very unwise to be serious about humour. My preference is the great aunt's knickers jokes.

Marginalia: bloomers always go down well in my house.