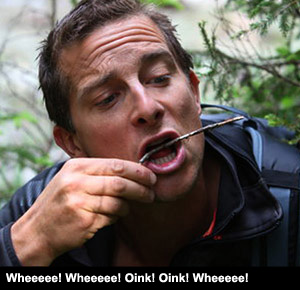 It's not often I write about my sporting endeavours on this blog. And there's a very good reason for that. I tend not to undertake any.

When Prince Harry was slogging his way to the North Pole he did it without my help. Sure he asked me to come along but, you know, I only do white and ginger when it's Karen Gillan or Nicole Kidman so the thought of 3 weeks in the snow with the half-blood ginger Prince didn't do much for me. And really, the arctic circle is no place for strip billiards (balls tend to ice up when left outside the pockets for too long).

And the amount of times Ray Mears has telephoned or emailed me and asked me to be his wingman on some jaunt around the Amazon or the American Rockies... well, to employ the old saying, I haven't had as many hot dinners. And as tempting as it is to hunt Bear Grylls "Deliverance" style through the American back-country while he squeals like a pig it doesn't compare with killing Falmer in Skyrim from the comfort of my own office chair surrounded by the vast Lego world I have built around myself to protect me from the ravages of the real world outside.

And don't even get me started on the Olympics. I thought it only fair to give Mo Farah a fighting chance at a medal, OK? Such trinkets of idolatry mean absolutely nothing to me.

So it came as a complete surprise when I found myself lured into the competitive world of team walking. For the first time ever I have joined with some work mates from the corporate world that I inhabit in my daylight hours to undertake the GCC Get The World Moving Challenge.

Basically, for the next 100 days I will be living in one-sided symbiosis with a digital pedometer (not paedo-meter as my eldest son insists on pronouncing it) that will record my regular 24 hourly attempts to walk at least 10,000 steps a day in tandem with my team mates. Those steps are then input into the web site above and translated to miles that are plotted onto a satellite map. The goal is to virtually walk around the earth and, dependent on your competitive bent, thrash the Americans who are currently top of the leaderboard.

No donations from you are needed though your verbal support would be appreciated.

At the moment the pedometer is proving to be an almost hypnotic distraction. I find myself checking my step total so often I am beginning to walk like Riff Raff from the Rocky Horror Show. Possibly the hump on my back and my odd, stilted way of talking had already placed that image in people's minds but I like to think my penchant for singing the Time Warp is a new development in an already damaged psyche.

I'm also becoming more annoying and inane in my interactions with those around me than normal. For instance did you know that it takes me 100 steps to get up in the morning, get dressed and feed the cats? Or that an average bout of meal preparation in the kitchen takes me approximately 500? Next week I hope to be able to tell you how many steps it takes me to walk to work and how many I clock up stamping my feet in the office when Skyrim crashes on me.

Steve: thanks for the invitation but I feel I must decline; I don't really go in for cut-and-paste style second-hand preachiness. I also don't appreciate people hijacking the comments page of my blog to further their own marketing requirements. I nearly didn't publish your comment but, to be honest, so few people visit and leave comments on my blog these days that it's a case of beggars can't be choosers. SO is that work that saves my blog or doesn't? To be honest, I don't really care. Have a great afterlife.

Steve: P.S. Just realized it was the "Deliverance" reference that brought you here, wasn't it?

Did you visit his blog? He says "All my posts may be reproduced as long as the content is not altered". Credit to him for being sincere, but what if someone copies his posts replacing the word 'God' with 'Mickey Mouse'?

As for walking, wasn't that once an Olympic sport? I remember the competitors doing a duck-like walk which made their arses wiggle. I've got a feeling you could do it without lessons. If you're going to take up a sport, do it properly.

Gorilla Bananas: I gave visiting his blog a miss, I must admit. I kind of felt I'd got the gist of all he had to say from his comment above. There are worse names you could replace God with. Jeremy Clarkson and Nigel Farage are 2 that immediately spring to mind.

As for speed-walking. I'd love to give it a go but I don't have pants short or tight enough. Though I've been told I have the buns for it.

Not to be outdone...

Proverbs 3:5-6 Trust in the Lord with all your heart, and do not lean on your own understanding. In all your ways acknowledge him, and he will make straight your PATHS.

Matthew 6:9 And forgive us our TRESPASSES, As we forgive them that trespass against us

Psalm 119:133 Keep steady my STEPS according to your promise, and let no iniquity get dominion over me.

John: Oi! Oi! Oi! Forget the Reverend Finnell - he has his own blog! What about mine!?

Ah you do make me laugh, Steve. Prince Harry and Ray Mears are missing a trick not having you with them on their exploits. If you have a bit of a hump you are half way there for the naked billiards position.

Trish: trouble is I'm not at all enamoured of the Ginger Prince's cue action...

You're name sake Steve. He's really is no fun.

In the words of Steps "Tragedy".

Barry: I know. I think I would have enjoyed a bit of fire and brimstone more.

You have to walk in tandem? You mean legs tied together like a three-legged race? Or side by side...do all your work colleagues walk down the stairs in the morning to the breakfast table with you? I am confused. Anyway, thanks to Steve for the sermon, I see he says your blog is 'The Work of God" Well done!

Nota Bene: going to the toilet is great fun. We're all learning to hold our breath.

And it's about time someone recognized my godliness.

Do you do that high weird arse wobble all the speed walkers seems to adopt ?

Actually, no, don't answer that. The mental image I am currently nurturing is challenging enough as it is.

More power to you. I am impressed.

Now pass me that uneaten Magnum.

Keith: you want my Magnum? You'll need to catch me first. Just follow my furiously wiggling tush. You know you want to.

Goodness gracious...my modem blows up and I return to the internet only to find you are walking round the world and being stalked by Holy Joes...
Good job you told him to get him behind thee, though the temptation level could best be described as minus 10.
I note that the number I have to type to prove that I am not a robot is 333.....only half a Beast of Revelations...

The fly in the web: the diet coke of Beelzebub; not quite Beelzebub enough...

Nevertheless, welcome back to electronic life!