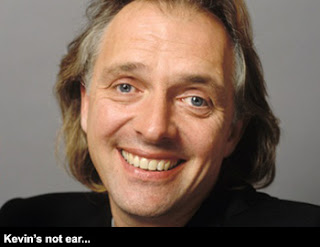 There’s going to be a lot of hyperbole written about Rik Mayall over the next few days. Some of it will be ball-achingly official, most of it will be deeply personal. This will fall into the latter camp.

To oafishly paraphrase Shakespeare: "Alas poor [Yo]Rik… Where be your gibes now?"

The answer is everywhere: all over the internet; all over YouTube; in boxed sets in every entertainment store up and down the country and, most important and most relevant of all, on the lips and in the minds of everybody who ever loved “Bottom”, “Blackadder”, “Man Down” or any of the other amazing raft of comedy adventures that Rik Mayall indulged in.

My good friend Dave and I have been indulging in “Bottom quote tennis” since we first learnt of his death yesterday. And we’re still going strong. An endless rally where every return is still somehow an ace.

For anyone who loved “Bottom” these quotes are pregnant (oo-er) with meaning:

"I'll just pop upstairs and scrape off the sheets..."

“And I promise Lord that I will come to church every day… you do still do that thing with the wine and biscuits, don’t you?”

“They’re all doing it and doing it and then sitting back and having a fag and then doing it some more… oh Eddie why won’t anybody ever have sex with me?”

And there’s hundreds and hundreds more. I could fill the entire post with them.

I never liked “The Young Ones.” I freely admit that. I never watched it when it was first broadcast but a kid at my school, Richard Saul, was plainly an early devotee and would come into class the next day and basically re-enact the entire show, word for word, and add in his own especial brand of teenage obnoxiousness (I’m sure he matured into a truly lovely man). I confess it ruined it for me and I avoided the show like a plague afterwards. I finally caught up with it years later after being indoctrinated into the world of “Kevin Turvey”, “Filthy, Rich & Catflap” and “The Dangerous Brothers”. I thought I’d give it a go but “The Young Ones” just seemed…very amateurish and, worse, unfunny. I could see its anarchic approach was ground-breaking but the comedy was lazy and very hit or miss. For me it mostly missed.

But hey, everybody has to start somewhere.

“Bottom”, however, did it for me. Down-at-heel, tawdry, disgusting, puerile, childish and obsessed with body parts, body functions and sex. Everything I look for in a wife. Wife? I meant to say sit-com. Honest. “Bottom” came along at the right time of my life. I was a late teen. I had a filthy sense of humour but no appropriate outlet for it. And I was a virgin and likely to stay that way forever. Or so it seemed. To say I identified a little with Richard Richard is to under-egg the milky pudding immensely. The best thing about “Bottom” was that it was gloriously un-PC. I lapped it up. Oo-er again.

After that I was into everything Rik did. “The New Statesman”, “The Comic Strip” – especially the “Bad News” episodes – “Blackadder”.

Things went quiet for a long while. There was Rik’s horrible quad bike accident. The “Bottom” movie – “Guest House Paradiso” seemed a bit flat and the 3rd series of “Bottom” felt like it had been a struggle though the Halloween episode is still a classic.

And then last  year Rik resurfaced in “Man Down” as Greg Davies’ dad. It was a performance of utter genius. Pure Rik Mayall. Filthy, cheeky and full to the brim with blue-eyed, manic-smiled malevolence. The wife and I were desperately looking forward to the second series.

And now Rik is gone. Just like that. Out of the blue. It feels surreal. I’m shocked by how deeply it’s affected me. Rik Mayall was hardly “cuddly” and yet there was just something about him that was loveable. He was naughty. Very, very naughty. And ultimately, I think we all like a bit of naughtiness. We admire those who get away with it, those who push things a little too far and then say, “Oh tish” when some pinch-mouthed puritan inevitably gets their knickers in a twist over it.

Rik Mayall exuded comedy. Actually, that’s too passive. Given his high-octane, high-energy performances he projectile-vomited comedy all over the audience, all over his fellow actors and production teams and then hawked up a couple of big juicy lugies or two to act as comedy chasers. To watch Rik was to be utterly immersed in his performance. He was the ego sublime.

And now that he’s dead all I can think to say is, bollocks.

I could always see he was a comedic genius, but it never really particularly appealed (Blackadder excepted) ...but I do mourn the passing of someone so young and someone who brought enjoyment to so many people...he was quite a B'stard

Nota Bene: I can remember a very po-faced Tony Robinson, when interviewed about his Blackadder days, remarking that after filming with Rik, Rik shouting out afterwards, "Well? Did I win?" which, according to Tony, was not really the stuff of ensemble acting. But it did make me smile and like Rik Mayall even more. His comedy performance was all ego and he knew it.

I also felt very bereft when I heard the news yesterday. The Young Ones maybe had more appeal for me as the series was aired when I was a student. Very sad and bloody annoyed that he's died.

Trish: yes. I agree. I feel annoyed too. How bloody dare he!

To see mentions of him in my social media timelines over 24 hours after his death was announced goes to show that some people were just brilliant at what they do and that's all that mattered.

II's a sign of his talent that we associate him with Blackadder when he only appeared in it for a few minutes. I saw him live in stage years ago - he was an antidote to the politically driven humour of the day Yes, very sad.

Nickie: very true. It also shows that sometimes we don't truly appreciate someone until they're gone.

The bike shed: despite his filthy jokes there was something very pure about his humour and the laughter he could provoke in people. There was no higher agenda other than to make people laugh.

It strange you didn't like 'The Young Ones' because Rik's character totally owned the show and made plenty of bottom references. He made it cool to be a prat, which was an incredible achievement.

His bottom dance during the opening credits of 'Bottom' would be a fitting epitaph. I think you should re-enact it in honour of his memory.

Gorilla Bananas: I may well do that but I need someone to take the Eddie Hitler part. Care to join me?

"And now he's died for real. Without me. Selfish bastard."

I didn't like 'The Young Ones' - too loud for me too but I loved 'Bottom'. Terribly sad, especially when they're taken so young.x

Nana Go-Go: God must be in need of some grade 1 toilet humour...