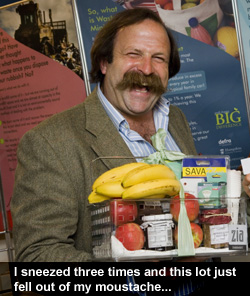 Dick Strawbridge must surely have the biggest moustache in the UK. It’s bristlingly humungous.

So humungous in fact I wouldn’t be surprised to see it part down the middle to reveal Tommy Trinder on the London Palladium stage shouting out good ol’ cockney rhyming gags about his mother-in-law getting her dumplings trapped in Mrs Rawlin's washboard at number 35.

I’m convinced that in an emergency Dick’s mighty moustache actually fans out 360 degrees around the central pivot of his nose to become a shiny conker-coloured radar dish that links up with his (homemade) GPS system and allows Dick to accurately pinpoint his exact whereabouts to within one hair follicle of his impressively groomed hair curtain.

Does the man sleep with his nose in a grow-bag? How the hell does he get his tache so big? I swear to God that in the new series of It’s Not Easy Being Green it appears to have grown another 2 foot in length. Any longer and Dick will turn into Cousin Itt from the Addams Family.

How does he kiss his wife? Does he have to pin it up behind his ears with hair-clips?

Despite – or maybe because of – Dick’s top-lip hirsuteness I find him incredibly engaging viewing. Most people know him from his incessant victories on Scrapheap Challenge; so constant was his success I believe that in the end the show’s producers had to ask him to stop entering so that other lesser mortals could stand a chance of winning occasionally. The man is undoubtedly a green gadget genius. And fair play to him, I say.

The only thing that genuinely puzzles me about Dick is how on earth an ex army Lieutenant Colonel with a fulsome military moustache can: (a) be so jolly, easy going, level-headed and humane and (b) have such a yoghurt-weaving, bangle-wearing, hippie peacenik family?

Does Dick’s moustache have holistic, world-healing powers that the Ministry of Defence doesn't know about?
Posted by Steve at Monday, March 26, 2007
Email ThisBlogThis!Share to TwitterShare to FacebookShare to Pinterest
Labels: DickStrawbridge, moustache, television

It’s crazee and it’s kooky… Dick obviously likes it bushy (as the rest of his jawline is extremely well-shaven)! I’m assuming, therefore, that he doesn’t use a Braun. I was so unimpressed by Braun’s capacity for a clean shave that I didn’t buy the company!!

Anyway, take a look at a current £20 note, before they’re removed from circulation, and you’ll see Mr. Strawbridge’s tash is very Edward Elgar!!!

Hmm. Yes. You're right. I'm thinking of growing one myself now.

My girls accuse me of being a bit of a
'yoghurt-weaving, bangle-wearing, hippie peacenik'
so perhaps this is one program I shall have to look out for for a few more tips on how to embarrass them in public but then isn't that a parents sole purpose in life to embarrass their children?

Absolutely! Which is why every time our lad pulls silly faces and poses when we're trying to take his picture we make a point of telling him that we'll save all these photos to show his future girlfriends... it's the least we can do.

I found this comment whilst looking at green isues, it is from Mr Dickie Strawbridge TV's favourite moustache.

The best idea I’ve seen to tackle climate change is…
I’m working with a company that has found a way of capturing CO2 emissions from internal combustion engines, which could mean that soon cars, power stations and any form of motor powered by fossil fuels won’t contribute to climate change.

If this company has achieved this as Mr Strawbridge is saying then we are looking at the next Industrial revolution as discribed by Mr Gordon Brown earlier in the week.

The comments were of this being worth Trillions to the British Economy and a million new jobs for UK workers.

Does anybody know who they are as every company in the country, nether mind the world will need there services. If Al Gore got a Nobel peace prize for a film on Climte Change, what will these guys get for actually halting it?

I look forward to reading the next issue, maybe finding out who they are?