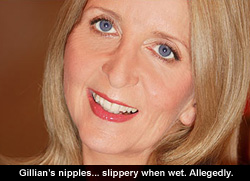 This is not the first time I’ve written about Madame Gillian McKeith (read my previous post here) but I am compelled to write about her again today because of two undeniable spurs.

One is a post about Gillian M and healthy eating in general on Flaming Nora’s fab blog – read it here.

Two (fittingly) is the novel spectacle of nipples appearing for the first (and hopefully last) time on this week’s edition of You Are What You Eat broadcast by Channel 4 on Wednesday evening.

Before you turn away with sickening visions of Gillian McKeith pole dancing around a twiglet swirling around your mind I must add that the nipples were not Gillian’s and weren’t even attached to a body...

In an attempt to plumb new depths of revulsion Gillian this week presented some poor hapless student with a round of drinks that would make a pig throw up. It seems that this pleasantly buxom student had a penchant for cider and cocktails – and in particular Slippery Nipples (well, don’t we all?). All of this quaffing had had rather a ballooning effect on the poor girl’s waistline. This was all the excuse Gillian needed to line up a selection of drinks that could only have been mixed at the nearest abattoir or A & E department:

1) Cider with lumps of brain matter in it – cos cider rots the brain, don’t you know.

2) Lager with eyeballs floating on the top – too much alcohol ruins your sight, doh!

3) A Slippery Nipple with real nipples in it – cos alcohol plays havoc with yer erogenous zones.

Not only was this biology lab gimmick disgusting, abusive and offensive it was also bordering on the perverted. Where does Gillian get all this stuff from? I’m assuming (hoping) that they weren’t actually human nipples - but it still begs the question whose nipples were they?

Now that could be one helluva game show...

They certainly didn’t come from a cow or a dog or a cat. Anyway, musing on their origin led Karen and I to surmise that maybe Gillian had grabbed a pair of nail clippers and clipped off her own nips just to make a point (as it were) and I must admit that I did come up with the revolting (even by my standards) idea that Gillian’s aureoles were surely surrounded by wispy grey hair and crow’s feet... you can see how such a disgusting TV spectacle had canted our thinking, can’t you? Normally we’re very sanitary and aesthetically high-brow in our conversational topics.

Anyway, it was a joy to read on Flaming Nora’s blog that Gillian’s rightful ownership of the epithet “Doctor” is in some doubt as her qualifications apparently come from some unaccredited American college so strictly speaking she isn’t a real doctor at all...

I am addicted to watching Gillian McKeith because as I watch I can never quite believe the sadistic pleasure that Ms McKeith seems to gain from her 'healthy' regimes that she inflicts upon the poor punters on her show.The fact that the punters are pleased with their new look does make it ok though,they are pleased and she has 'fun'.

Wow, it sounds really gross...! No wonder in Malaysia we don't get the shows you seem to watch...heheh...

You're right in a way; I guess the fact her clients are pleased with the end results makes it ok for them... but does the end ever justify the means? I do think Gillian's shock tactics are now getting too gimmicky and are pushing the envelope of grossness out a little bit too far!

Hi Eve, it sounds to me like Malaysian televsion might be a tad more discerning that it's UK counterpart. It may be that you have the better part of the deal!

Sounds like this charlatan would be more at home presenting "The Word"!

'Dr' Gillian McKeith's programmes are the televisual equilavent of medieval serfs gathering around the stocks and throwing donkey-shit at the village idiot.

No wonder I enjoy them...