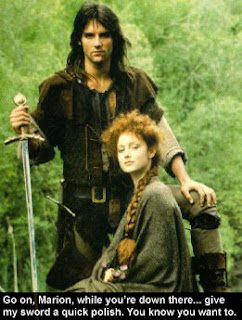 Without any sense of shame I am happy to admit to being a true devotee of Robin Of Sherwood and have managed to get my boy successfully hooked on the show too. Which is great because ITV3 are currently rerunning every episode of this wonderful series on weekday evenings.

They have currently progressed to the Jason Connery era when Michael Praed’s dark looks were shockingly replaced with the dazzlingly bright blondness of Mr C. Sad to report, at the time, I was deeply traumatized by the death of Michael’s Robin and can remember my young burgeoning self being quite resistant to Jason’s attempts to step into the lead hero role.

Even to this day, for me Michael Praed’s character is still THE Robin Hood. He managed to portray a quiet yet strong individual, confident but not arrogant in his leadership who had a natural and unerring sense of right and wrong. His latent psychic abilities were another string, as it were, to his impressive bow. Jason’s Robin on the other hand was far more ordinary: from a privileged background his sense of right and wrong was more politicized and so somehow less personally motivated. I also thought Jason was just too gawky and awkward in his portrayal of The Hooded Man for it to sit comfortably with me. This from a gawky, awkward teenager! What a cheek I had.

Looking at them now, even though Michael Praed is still streets ahead, I have to confess that I think poor Jason Connery suffered unfairly from the inevitable comparison. I recall that even the media didn’t really take to his version of Robin and the series was dropped after his first and only outing. This was greatly unfair because it’s now plainly evident that he was growing into the role and slowly making it his own.

Anyway, it’s no good crying over the demise of a show that occurred 20 years ago... but it is interesting to compare Richard Carpenter’s Robin Of Sherwood (Richard Carpenter wrote the show) with the BBC’s recent Robin Hood adventure series.

Regular readers of this blog will know that I took the Beeb and the makers of Robin Hood to task on many issues on an almost weekly basis. The massive plot holes... The glaring departures from recorded history... The gargantuan anachronisms... All served to undermine what had obviously been a very expensive show to produce. The Beeb had certainly lavished money on the show... onto everything in fact but decent writers.

Robin Of Sherwood on the other hand was very low budget – they only had two cameras for the entire 3 series run! - but Richard Carpenter’s writing was rich beyond price. Every story was carefully crafted. They didn’t rely on gimmicks or lightning fast editing effects. The costumes looked unquestionably of the period and I cannot recall one single anachronism or historical inaccuracy ever blighting the show. Even in 2007 the show is far superior to the BBC’s ill thought foray into Sherwood forest. It is the benchmark that others have still yet to reach.

To my shame I have to admit that due to my advancing years the Robin Hood of my youth was Richard Greene. I'm afraid that I seem to have missed the 1984 Robin of Sherwood, Michael Praed, though I was aware at the time of the series I never watched it.

It's nice to see a young Ray Winstone in the repeats on ITV3, too. I didn't see this series when it first went out because it was on at the same time as "Doctor Who" but friends always told me it had high production values. Now we know why you didn't see the good Doctor when you were in your teens!

At least one of those writers you mention, of the recent BBC version of "Robin", is responsible for a couple of episodes of this year's upcoming series of "Who" so let's hope he's improved in the six months since those efforts!!

After "Robin of Sherwood", Jason C appeared in a Colin Baker "Who" called "Vengeance on Varos", available on DVD but not from your local Sainsbury's!

Do you think the Enya/Clannad soundtrack works with the drama of "Robin of Sherwood"?

Definitely. In fact I've watched interviews with the show's producers who have admitted that the music from Clannad went a long way towards giving the show its identity. They're even amazed when they look back at the show and realize just how much of it is made up of the music as opposed to dialogue.

I remember the original series well, although I confess I only started watching it properly when Jason Connery entered proceedings. So therefore I only saw about half (or less?) of it? Sounds to me as though Jason was to Robin Hood what Peter Davison was to Dr Who i.e. blonde, less forceful and more sensitive and inevitably paling in the shadow of his predecessor. I never saw Michael Praed in the role, although I rememember my Mum and women nationwide swooning over his dark good looks and hairy chest. Old Jase wasn't so bad though. My abiding memory of Michael P is seeing him as Prince Michael of Moldavia in the super-soap "Dynasty", wooing the ever so posh Amandaaa, daughter of Joan Collins. And who can forget the Moldavian massacre? Surely the highpoint of Michael's career.

I remember the final ever episodes of the 1980s Robin Hood - "The Time of the Wolf" I think the story was called - which consisted of actors dressed in cr*p wolf costumes. And didn't Robin die and then come back from the dead again? Whilst Marion, thinking that he really had carked it, went off and joined a nunnery didn't she? (Well the prospect of nooky with the rest of Robin's Merry Men can't have been that enticing - I don't recall them being a very sexy bunch).

I didn't feel remotely inclined to watch the new version of Robin Hood - I read quite a bit of negative critcism about the show and your comments seem to reinforce that! I agree that big budgets and special effects can't mask poor writing - look at the "new" Star Wars trilogy for example - it just doesn't compare with the original. The 2000s Dr Who on the other hand has been a triumph of bigger budget, better special effects AND decent script. I had to mention it somewhere didn't I?

Ah yes, The Time Of The Wolf - it featured Richard O'Brien as Robin's arch enemy, Gulnar, who makes a replica of Robin by dark magic. Robin kills it but Marion finds the body and thinks it's the real Robin! As you say, it was either off to the nunnery or end up being Little John's forest nymph. I guess the church can be appealling sometimes...