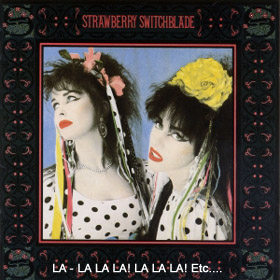 Sunday’s post – plus a belated fascination with YouTube – has made me review and analyse my music choices.

I’ll admit that at heart I’m an Eighties boy through and through and the result of a misspent youth during this period is a humungous record collection that covers everything from ABC to XTC. I suspect my love affair with Eighties music comes from the fact that this was the era of my “formative years” – I can recall my parents talking of the Sixties with much the same level of reverence and sentiment. And certainly although I loathed Wham and Bananarama at the time I now look back on them with a mawkish fondness and a realization that actually they were pretty damn good... though maybe that says more about my disenchantment with the current music scene.

Hmm. Maybe disenchantment is a bit strong, I mean I’m still buying new music – The Editors, Gnarls Barkely, The Doves, etc – but I’m very aware that the amount of money I invest in music these days is a pitiful fraction of the moolah that I used to throw into my vinyl collection. And that isn’t just down to fraught economics.

Christ. It’s a scary thought but somewhere along the lines my love affair with the music scene has diminished and stalled. Become trapped in a musical time-warp. The Enchanted Forest Of The Eighties.

But it’s an enchantment that makes me happy for the most part. On my work journey I’m more likely to select some vintage Kate Bush or some early Eighties Killing Joke (dependent on my mood) to pep me up for the day ahead rather than anything produced in the new millennium. It floats my boat so what’s the problem?

I do worry though that I’m giving my boy a slightly skewed musical world view by immersing him in bands like The Cocteau Twins and The Pretenders rather than their more modern counterparts but I guess as he gets older he’ll find his own musical path.

An ex girlfriend of mine absolutely hated Eighties music – now if that wasn’t a sign of impending doom I don’t know what was – her argument being that she hated the production values. That’s a pretty fundamental objection when you think about it. Part of what I like about Eighties music is “the sound”. I love the lushness and polish of some of it. Trevor Horn’s stuff certainly stands out a mile.

Ultimately though it’s interesting to note that the Eighties are enjoying something of a revival – so many bands now are emulating (consciously or otherwise) the Eighties look and sound. So much so I feel like the world is entering the Enchantment Forest with me. I’m sure it’ll be short-lived as all fads are. But when everyone else has moved on again I suspect I’ll still be here.

Skipping through Strawberry Switchblades, up to my neck in The Stranglers and wailing along to The Banshees...
Posted by Steve at Tuesday, September 11, 2007
Email ThisBlogThis!Share to TwitterShare to FacebookShare to Pinterest
Labels: eighties, KateBush, KillingJoke, music

Oh, now you're sending me back! I am going to scour my collection to see what I have left over from the 80s as well. Mostly still on vinyl (CD collection started in the early 90s). I'll be back!

I'm more of a Seventies' boy and, you're right, it's to do with the period of our "formative years". Although, there are styles within each era with which certain personalities associate more than others. I was never into Soul or Prog Rock, between '72 and '75, but Glam Rock was my thing. And, that "style" can be sub-divided into two categories. There's the silly stuff like Mud, Sweet and Showaddywaddy and the more inventive bands such as Roxy Music, Cockney Rebel, Mott the Hoople, T.Rex and David Bowie.

I got into New Wave, too, from about '77, rather than Punk, especially as I was playing in bands from around that time. The most influential of these descendants of Glam, on me, was The Stranglers. Although, the groups I formed probably sounded more like Magazine, the spin-off band from The Buzzcocks but with keyboards!

I can understand your parents' enthusiasm for the Sixties. I didn't really get into pop in a big way until late '71 but my Mum had taken me to see the Beatles' films at the cinema on their release and I used to get my Dad to write down the charts from Alan Freeman's "Pick of the Pops"! I downloaded "Judy in Disguise (With Glasses)" just the other day, a fun parody of "Lucy in the Sky with Diamonds", which I loved as a child!!

The Eighties have their highs, too. Mostly, for me, the bands I perceive to have evolved directly out of Glam and New Wave such as, as you rightly identify, XTC and The Cocteau Twins, Siouxsie and the pull of the Bush (as in Kate). I even liked Duran Duran, The Thompson Twins and Kim Wilde, at the time, but never ABC or Spandau Ballet who always came across as a poor man's Roxy Music, lacking the energy and vitality of Bryan Ferry's original ensemble.

Hi Amanda, I'll be interested to hear what you find!

Hi TimeWarden, I think New Wave was the first music scene for me that impinged on my psyche in a personal way... I recall groups like Visage, Depeche Mode, New Musik and Talk Talk plus early Duran Duran all coming out of the mix of this time. One of my pride and joys is an early Tubeway Army EP which sounds so crisp and modern even today. Talking of which, I really loved the moog sound that made Gary Numan famous. It's a lovely meaty synth sound - interesting to see it (or an approximation thereof) featuring on the theme music for The IT Crowd.

Kate Bush and The Cocteau Twins are perennial favourites for me - totally timeless. The Thompson Twins I'd forgotten about - feel quite ashamed; they were well ahead of their time.

As I am a 'Baby Boomer' and brought up in the 60's my children grew up listening to Simon and Garfunkel, Karen Carpenter and the Beach Boys.However, this did not stop them developing their own taste in music. I know every word to every song ever sung by Ant and Dec ( at one point they were BIG in our family) Pulp, Oasis, Blur, Coldplay(Yellow on repeat, day and night for a month), Eminem, Alanis Morrisette, Westlife(!), Boyzone(!), Spice Girls(save me) and Take That.However, my younger girls have a bit more eclectic taste and I have had to suffer what one sister(not me) calls Chav music, plus jazz, Glen Miller, Avril Lavigne,McFly and Busted.
I discovered music in the 70's so I harbour a not so secret love for Donny Osmond, David Cassidy and Glam Rock. The first single I bought was Tiger Feet by Mud.
Whilst your son may be lucky enough to experience your love of 80's music I wouldn't worry about him developing his own taste in music.
My youngest who is 6 regularly sings Simon and Garfunkle, Daniel Bedingfield(I wont apologise), James Blunt and Lily Allen.
In my daughter's special school she has the staff in hysterics,she talks to herself a lot but doesn't engage in conversation but can sing word perfect at the top of her voice Oh My G-D I Can't Believe It by Lily Allen.

Hi Ally, yes I think you're probably right. I recall quite liking my parents taste in music - my mum was into The Carpenters and Boney M and my dad liked the Rolling Stones and obscure American Country and Western classics (I have a soft spot for Marty Robbins' Felina)... although it's left me with an appreciation for all these other groups (aside from the C & W) I did go on to make my own choices and selections as i got older.

Have to say I think you're daughter is showing a remarkable ability for coolness being into Lily Allen! :-)

I like Wham... especially 'Wake Me Up Before You Go' .. and Wham turned into George Michael (I remember him for his song 'Father Figure')... ;-)

While a lot of my friends pine for the past, I'm glad to say that my tastes are always moving forwards... Though I don't ever lose my passion for what I enjoyed years ago.

That said, it's bloody expensive - and I never have enough time to listen to have the stuff I want to.

Sometimes it'd be easier and cheaper just to stick with the old faithful...

Hi Eve, I don't go a bundle on Mr Michael though I appreciate that at the Queen memorial concert he was the only singer with the vocal range to do Freddie Mercury any justice at all...

Hi Rol, I do feel quite sad that the music scene seems to have left me behind. I feel like I'm stranded at a service station while everyone else carries on to their destination. A lot of it is lack of money and time... and my interests being focused elsewhere...

Hi Amanda - a big thumbs up for Blondie, Eurythmics and Joan Armatrading: they feature in my own record collection as well. Ultra Vox I liked but for some reason never bought any of their stuff and Spandau Ballet were just not a band that boys liked at the time!

I recall being in a bar listening to "It's alright, baby's coming back" so loud I thought I'd never hear anbother song in my life...but it was good.
Also had a fondness for Devo. I think the 80s was a great time to be all over the place musically. When I have an honest look back I do recognise that I had "fads"...some of them don't go away, they are like comfort food - you turn to them when you need something (kinda like fruit toast all hot and buttery). Its all good. When my husband and I (doesn't that phrase make you gag!) moved in together we had about 200 CDs between us but only 3 the same. He's a real Blues nut, whereas I consider I can listen to anything (other than rap and heavy metal and the really waily god-bothery stuff)- he says I'm a "fence-sitter- but, as PopEye says "I knows what I likes". One of the songs I seem to listen to most lately is "Twilight" byThe Band. Go figure.

I must admit "my wife and I" had a similar experience when we moved in together and pooled our respective music collections - similar genres but very few specific crossovers in terms of records/CDs bought. A merging of complimentary tastes which has augmented both our collections!