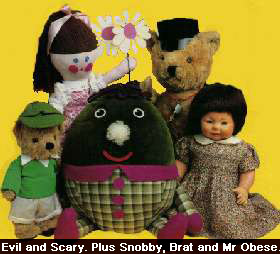 It seems Hamble has gone missing, if the Grauniad is to be believed... Be scared, be very scared...
https://www.theguardian.com/media/mediamonkeyblog/2014/apr/30/bbc-play-school-reunion-hamble

Bagpuss: she's gone rogue. She'll be stalking our streets at night armed with a Stanley knife and a claw hammer. Floella Benjamin needs to hire some protection!