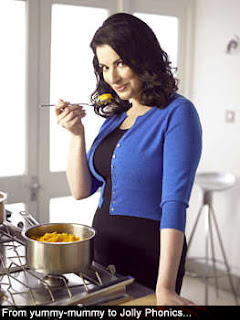 I received something of a shock phone call yesterday afternoon. It seems a hack from the London Standard had found my Nigella Espresso post and wanted me to comment on a recent article in the newspaper that voiced the opinion that Nigella has become so verbose in her descriptions of recipes that her cook books were actually alienating the small percentage of the UK population who have a below average reading ability.

I was glad to oblige and managed to rustle up something quick during the afternoon, Steve Express style. I don’t know yet if it’s going to be used (I’ll keep you posted on that, naturally) but thought I’d post it here for your perusal.

First: a few excerpts from the original article:

“Nigella's recipes are a bit of a mouthful, say literacy experts: ‘Too many adjectives make her instructions difficult to follow’”

“A survey has found that the chef’s verbose style makes it harder for adults with poor literacy skills to follow the instructions.”

“According to the study, [Nigella] uses long sentences, too many adjectives, extra commentary and personal observations.”

“The survey, carried out by the Government's Get On campaign, looked at a variety of recipes from Smith, Lawson, Nigel Slater, Jamie Oliver and Gordon Ramsay.“

“It found that Slater was the easiest chef to follow, with all his recipes reaching the entry level three standard, or that expected of an 11-year-old.”

“Ramsay said: 'I'd hate to think there might be people who aren't giving cooking and new recipes a go because they are worried about the reading, writing or maths side of things. Brushing up on their literacy could make them a better chef, as well as improving their life.'”
And my pro-Nigella response:

Re: "Nigella's recipes are a bit of a mouthful, say literacy experts"

It's rather amusing to read that a survey has flagged up Nigella Lawson as being too literate for a small percentage of the UK working population and that "too many adjectives" apparently make her recipes difficult to follow.

Too many adjectives? What kind of a criticism is that? Isn't that like saying that Mozart's “The Magic Flute” contains too many notes? Will the removal of all adjectives suddenly render Nigella's cookery books readable by absolutely everybody regardless of their literary skills?

I think not. Poor literacy is as much to do with not understanding syntax, grammar, nouns, participles and verbs as teasing out the meaning of a hundred assorted adjectives though, I'll admit, if you find reading difficult, a wall of purple prose is hardly going to fill you with much enthusiasm.

The real criticism that can be levelled against Nigella then is one of style and I guess you either appreciate her yummy-mummy gastro-gushing or you don't. If you don't then you can always give Nigel Slater a go as, according to the same survey, he is infinitely easier to understand. I'm inferring it's because he uses less adjectives and his cook books are therefore more plainly and simply written. Dull and boring by any other name. Nigella's fans like her because she is so fulsome in her descriptions, because she does go OTT about the colour of cantaloupes and the odour of aubergines. She's sensuous, lush and evocative (which is obviously Nigella's schtick) and her verbal descriptiveness, whilst a sort of taste sensation in itself, actually adds an extra layer to our appreciation of her recipes. Her words enrich our tastebuds as much as the ingredients she uses. But most of all she's entertaining. This is rather an important quality in a TV chef. And it's practically impossible to be entertaining without flinging the odd adjective about...

So why should a small percentage of the population be denied access to this entertainment just because their literary levels fall below that of the national average? Surely the main problem is that 16 per cent of the adult working population have been failed by the Education system? More effort needs to be put into improving these people's literacy levels beyond that of an 11 year old and not in asking our TV personalities and celebrities to dumb down. For Heaven's sake there's enough dumbing down on our TV's as it is. We need to start smarting people up! Isn't it preferable to have our famous TV chefs - normally shrivelling the airwaves with language that would embarrass an East End porn star - actually pushing us to stretch our vocabularies as well as our culinary experiences?

As F word aficionado Gordon Ramsay himself says of people with reading difficulties: "Brushing up on their literacy could make them a better chef, as well as improving their life."

In the ineffable greyness of much of modern life, a bit of purple prose is surely the recipe for success?
Posted by Steve at Thursday, September 13, 2007
Email ThisBlogThis!Share to TwitterShare to FacebookShare to Pinterest
Labels: baps, baptitious, literature, London, newspapers, NigellaLawson, television

I think it stands a good chance of being printed. Points well presented, and wittily phrased. Wil await the good news...! ;-)

It certainly works for me...!

That is amazing!!! You're soooo lucky! I need to start blogging about famous celebrities and TV shows whereby I find myself questioning my sexuality. Maybe the UK Press will hit me up.

Wow, Steve! That's great. Watch out for your traffic to double, triple, explode to levels not seen before!

I'm not raising the flag of glory just yet... despite nagging me to tweak my composition and get it sent in for a 6pm deadline on Wednesday I have now heard absolutely zilch as to whether it's actually going to be used. I sent a polite email yesterday but have heard eff all back.

Now it could be the piece will be used today or next week so I'm not particularly getting my knickers in a twist about it but the cynic in me is very aware that it feels like I'm now lying back in bed expecting to share a fag with the journo but he's absconded out of the window never to be seen again...

Hmm. How unsalubrious. Hey - maybe I should question my sexuality if I want more press coverage:

So, what were you doing around 10pm last night?

Well, actually I was so tired I went straight to sleep...

Really?! Geez, boy, you need to work less and have more fun...

Oh well. It was worth a try. I suspect it will be far more exciting if you do it, Lucy!

All the best Steve. I hope they publish your comments.

I do think there's an element of class backlash in this though - it's about those who can't afford blanched truffles or pronounce them. Personally I just represent the class who just find them in my local co-op and is loathe to pollute the planet to drive to Waitrose ten miles away for such ingredients. I think Nigella should share the secret with us of how all her ingredients are magically already in the cupboard waiting, each time she cooks!

Thanks Laura, that's much appreciated... though I still haven't heard a dickie bird regarding the piece. Ah well. C'est la vie, eh?

As for Nigella's magically appearing ingredients, I suspect they're shipped into the warehouse-set along with the kitchen furniture and equipment when the scene crew re-create her real life kitchen for the television cameras... ;-)