By The Power Of Greyskull 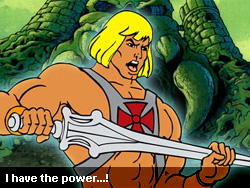 I had an interesting phone message left on my mobile yesterday from Mr CM doing his damnedest to sound all polite and matey. I must admit that as soon as I saw who it was from I deliberately didn’t answer the phone. Maybe that was cowardice but I’m having such a lovely time with my family at the moment that I’m loath to let it be polluted by unwanted external influences.

I did however listen to the message: it merely asked me to call him back regarding an email that he’d just sent to me…

So with more than a few misgivings rattling around the bell tower of my consciousness I checked my emails and sure enough there was one from Mr CM lying in my in-box like a snake in the grass.

I opened it and breathed a sigh of relief. It was nothing too major. He just wanted a little updating work doing to his site; pics of a new vehicle that he’s just bought that he wanted putting on-line "ASAP" as he’d told various companies that he associates with that his site had been updated with details of this new acquisition…

And sure I could do it. Easy-peasy. Not even half an hour’s work. One hand tied behind my back, etc…

Except that even just this one tiny communiqué from this awful man had the blood souring within my veins.

He made me wait months and months before he paid me, reneged on his promise to pay several times and ultimately made me fight to get full payment out of him at the 11th hour. And now I’m supposed to drop everything and do more work for him?

Two things annoy me about his email:

(1) I emailed him weeks ago to say quite clearly that I would not be available for work once Tom was born and would in effect be taking paternity leave / a sabbatical. A reasonable statement of intent, I feel.

(2) His email clearly implies that he’d obviously assumed I’d just drop everything to do the work for him and he’s already foolishly told a load of big-shot business clients that the updates are already done.

Arsehole. Here’s egg on your face.

I’ve not responded. It might be a poor business decision but after all the grief he put me through in the run up to Tom’s birth I really don’t want to have any kind of association – business or otherwise – with Mr CM at all. It wouldn’t be worth the money even if I charged him double. So sod ‘im.

It’s actually really nice to have the power to say no and to have him at my mercy for once.

And curiously – even though it’s been well over 24 hours since he rang – he hasn’t been back in touch to follow things up. Either it’s sunk into his thick insensitive skull that I’m on paternity leave or he’s finally taken the hint that I don’t intend our business paths to cross ever again…
Posted by Steve at Thursday, October 18, 2007
Email ThisBlogThis!Share to TwitterShare to FacebookShare to Pinterest
Labels: BrighterWebDesign, money, work

Ha, what a double cheeky sod he is then! You're better putting your attention to the contents of Tom's nappy. Well done to thumb your nose at him.I can just imagine what it would be like trying to get paid for the next lot of work you did for him, unless you got it in advance and then dicked him about for weeks...as they say in China "Drink tea and forget the world's noises".

There's been no cheque through my door so far...

I think your final solution was best Steve - ie reminding him what your position was. Some people do have genuinely faulty memories as well as cheek. And some are just thick!

Whichever category he fits, tt least he is no doubt now!

I guess you & Mrs B won't want to leave the bambino with a babysitter just yet, but just a mention that the Leamington Poetry open mic night is on Sunday at The Fox at 8pm. Would be great to hear your stuff sometime!

Hi Laura, I actually had a very meek email in reply saying that "he understood" and would drop the cheque in before 11.30 am today. Sure enough it was put through the letterbox. Payment up front and the knowledge that he knows I won't stand for any more BS - that's a nice little victory in my book. My feeling is though that he won't bother to put any more work my way in the future - he had little choice this time because of time constraints - which suits me fine. An even bigger victory... let's hope the cheque doesn't bounce!

I would continue to do business with him for as long as he puts the money up front. Never reject income. Every little helps when you've an ever-increasing family to feed!

Which is exactly where I'm coming from really. I mean I'd much rather have nothing to do with him but money is money and I don't feel really ought to turn it down out of hand. At least this way I get the money guaranteed and, as Karen pointed out, maybe even a begrudging respect from Mr CM... he certainly rolled over and played ball very easily this time...

You did well! But timewarden has a point too; raise your prices, and get the money first, that way you're safe (except that he might keep asking you to redo the work... guess you'll have to balance out the pros and cons...)

Thanks Eve, I do feel a little twinge of pride I must admit but it's been a hard slog getting to this point. As said before though, I will be very surprised if I hear from him again in the future. Or is that just wishful thinking on my part?!