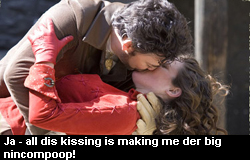 2) Marian kitted out in a rather fetching scarlet riding outfit topped off with a "Robin Hood" feathered cap motif - Errol Flynn stylee - and make-up immaculately applied by Gok Wan.

3) Dexter Fletcher playing the totally unbelievable Prince Frederick of Hanheim, exasperatingly be-costumed in a modern looking DJ while playing at the gaming tables and with a German accent so bad it would have been perfect for Allo Allo.

The writer's are just out-and-out taking the Michael. It's the only explanation for such blatant anachronisms. I get the feeling they've just thought "sod it - let's do what the hell we like and get people writing and talking about the show!"

Anyway, Marian, I have to say, looked distinctly ravagable and although it's a terribly shallow premise to watch a show it's better than doing so because I think the show is historically informative... I mean, please!

The writer's seem to be making good their promise to sex Marian up a bit and had plunged her neckline so low in last night's episode that we nearly saw her Nightwatchman's quiver. Nice to know that Robin has somewhere to hide his bow in emergencies...

The costume department also outdid themselves with Djaq, the female Saracen warrior who has conveniently joined the Merry Men purely for modern political expediency and correctness. Stuffed into a ballgown straight off the shelves of Laura Ashley she scrubbed up rather well and the Merry Men's arrows flew a darn sight straighter as a consequence...

Merry Men? Not quite but undoubtedly getting there...
Posted by Steve at Sunday, October 14, 2007
Email ThisBlogThis!Share to TwitterShare to FacebookShare to Pinterest
Labels: baps, baptitious, BBC, LucyGriffiths, MaidMarian, RobinHood, SheriffofNottingham, television

You need to take a cold shower, fella.

(Note to self: video next week's episode.)

I wish I'd seen this week's episode too now! I had thought of taping it but didn't get around to it and missed the repeat as well!!

I remember you saying in a previous post, you watch "Robin Hood" 'cos the boy likes it. I was wondering, as he's a fan of "Doctor Who", if he's also following "The Sarah Jane Adventures"?

Most importantly, many congratulations to a very proud Dad and ALL your family!!!!

When do you get the job as official reviewer? great commentary, makes me want to see it and we haven't a snowball's chance in hell way down here!

I watched Robin Hood properly for the first time this week and it made me laugh(well that has to be good surely?).I did a degree in history and we concentrated a lot on that period of time and yet I found myself questioning DID THAT REALLY HAPPEN THEN?Hands up! I'm an idiot and my lecturers would have been ashamed of me.Funniest for me-money safety deposit drawer and Marian's Tragus piercing.However, even with all the piss take it was very entertaining and I thought Dexter Fletcher was brilliant as Frederick(his accent sounded French to me!).

Hi TimeWarden, I think I've finally sussed and accepted that the show isn't made to be taken at all seriously; it makes a huge difference to my objection levels! Sadly we haven't been watching the Sarah Jane Adventure - Ben is very suspicious of girl heroes! I'm sure he'll grow out of it (as I did)! By the time I was 8 I was well into Charlie's Angels. And still am!

Hi Amanda, I'd love to know who decided which telly gets exported and which doesn't! All I can do is hope that they transmit it your way soon. I'd love to hear your take on it.

Hi Ally, French, German, Spanish... his accent was more widely travelled than he is! I'm sure there must be an in-joke in TV land about getting Dexter to do all awful accents - he spent an entire 5 series of Press Gang doing a dodgy American one in the late eighties/early nineties!

I agree with Rol - you need a cold shower Steve!

Ha ha - thanks Laura. Might be a few weeks before we're romping through Sherwood Forest... we're both absolutely knackered! ;-)

Well, as they say strap me to a tree and call me Brenda! We DO have that programme here. Must be the first episodes because your version sounds much better.The kdis quite enjoy it but I'm not sure how much they really like it or whether its an excuse to stay up late on a MOnday night. We do battle with that because they get to stay up late on a Sunday night to watch Dr Who. (Incidentally, my 10 year old is currently writing an episode of Dr Who). I must admit to struggling with the show so far, seems rather removed from the earlier ones we have talked about (Michael Praed, sigh!!) I will now pay more attention to the programme and report back in due course! Meanwhile, shame on me for being so observant.

Hi Amanda, I must admit I loathed the first early episodes and really laid into them on this blog. It wasn't until the end that my attitude towards the show began to soften. Now I'm beginning to accept that the show is a "just a laugh" - sort of like Carry On Robin Hood only without the gags, Barbara Windsor and Sid James... Good luck to your daughter with her DW episode. I must admit I've often toyed with the idea of doing such a thing myself: I just can't find the time to do it!

I really hate this show, well I only watched 2 episodes of series 1 and I hated them, so I assume it's still going to be complete crap !!

I do know what you mean, Andrew. I used to have a hate/hate relationship with the show which over the year has become, not exactly love/hate but more tolerance/hate. As my boy likes the show it makes it a little easier on me to have to sit through it. And Lucy Griffiths is nice eye candy...