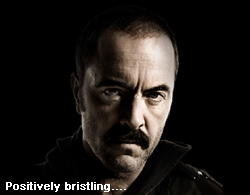 Karen and I are greatly enjoying Murphy’s Law at the moment. The script is dense, fast paced, full of twists and has James Nesbitt’s immaculately groomed moustache bristling all over it.

I must admit to liking James Nesbitt hugely. Not in that way you understand but in a “hey respect, dude” kind of way. Over the years he’s proved to be one of the UK’s most versatile actors. In every role I’ve seen him in he’s been believable... which, I’m sure you’ll agree, is rather an essential quality in an actor. The James Nesbitt persona doesn’t ever get in the way of whatever part he happens to be playing at the time.

This is no mean feat especially when, over the years, his playing of so many cheeky-chappie, quip-a-minute characters has written the James Nesbitt persona large all over the nation’s psyche.

Recently though he’s been developing a much harder edge – and I’m not just referring to the brutally chopped precipice of his lip brush. Jekyll saw him delving into Jack Nicholson territory with gusto – staring eyes, sharp teeth and “daddy’s home” vocalizations. His current outing as Murphy though sees him exploring something a lot darker and far more real... Jekyll’s appetites were too fantastic and too over-stretched to be truly scary. But Murphy is up against very commonplace desires that are no less damaging or less repulsive for all their regrettable regularity in our society. People smuggling, prostitution, rape, drugs... it’s a world we see portrayed quite often on our TV screens either through police dramas or documentaries... but Murphy’s Law has managed to reclaim the shock element of such activities. That’s pretty good going in an age of desensitizing video games and shlock-horror flicks for the under 12’s.

Murphy is a dour, insular, dangerously frenetic character with a tache like a Mexican bandido and Nesbitt walks a tightrope over the chasm of caricature with true grace and true grit. He hijacks the screen and carries the whole drama forward with a presence that commands our undivided attention. Nesbitt is at full stretch for the entire duration and doesn’t even break a sweat. It’s impressive to watch. I’m totally hooked.

Here’s hoping that Murphy’s tache scimitar will make a quick return to our tellies very soon.... and not just because I happen to possess one of my own...
Posted by Steve at Wednesday, October 03, 2007
Email ThisBlogThis!Share to TwitterShare to FacebookShare to Pinterest
Labels: BBC, JamesNesbitt, Jekyll, Karen, moustache, television, violence

He looks way too Village People in that pic for me to take him seriously.

What a great write-up for the show, can't wait til it finally gets here!! (A bit like you and THAT CHEQUE,I imagine)

Ah but Rol - you should see him in his police man's uniform...

Hi Amanda - only difference is the show is in no danger of bouncing when it does arrive and the sense of anticipation will be far more enjoyable!

The rumours are still circulating of James playing the Doctor after Tennant has departed! But, sadly, I don't think it will happen as it doesn't look as though a new actor will be required to take the lead in "Doctor Who" until 2011.

I must admit, although I like James Nesbitt, I'm not sure he'd make a good Doctor despite my initial positive reaction. I almost think he's too much for the role (which isn't too denegrate the show at all); like Eccleston I think he would see any move as a mere stepping stone or experiment and then bail out pretty quickly to go and do something else.

Blimey. Hark at me! The hotline to the stars!