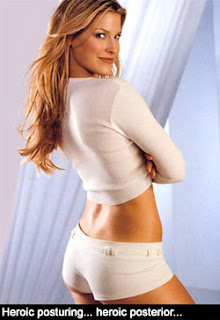 Taking the view that trivia often offers a modicum of light relief during a rough patch I present the following:

I caught the first episode of “Volume 3” of Heroes last night...

It’s never bothered me before but for some reason the whole “Volume” thing suddenly irritated me. I know it’s a reference to comics and books blah blah blah but it just felt a bit smug and pretentious when, Tim Kring, the writer / director bod was discussing his creation during the behind the scenes documentary. “In this volume yadda yadda yadda...” “Yeah in this volume we up the pace to breakneck speeds...” “In this volume it’s all sex and drugs and rock and roll...” etc.

Maybe I was just in a belligerent mood but I just kept shouting in my mind “Series! It’s a series – not a volume! It’s a series!”

Hmm. Maybe I need to get out more? Maybe I’m just transferring my current frustrations onto a safe non threatening target? Who knows?

By the way, sadly that last quote above was made up by me and isn’t at all real.

But as for the episode itself...

Totally back on form in my opinion. Straight in and no messing. The storyline engaged with several fast moving strands from the off and didn’t slow down, no, not once. And it worked. Gone is the stodgy, soap opera dialogue. Gone are the lengthy scene set-ups. Gone are the slow interminable journeys. Instead we move straight to the explosive arrivals. Instead the viewer is credited with some intelligence and some previous knowledge of the show and the plot simply drop-kicks you off a cliff and expects you to make your own way down to the bottom without complaining.

And I’m not. Well apart from the “volume” thing.

The good news is that Sylar is back and twice as nasty.

The other good news is that the affecting double act of Hiro and Ando is re-established and thus supplies the show with both its humour and its soul.

The best news of all is that Nikki is back although she’s now called Tracey and made her debut in this volume (grrr!) dressed in a white basque and suspenders (grrrowl!).

Er... I have no idea why that should stick in my mind more than the much improved post production effects that littered this episode like torn up Bradford & Bingley employment contracts but it just did, ok?

We’re talking the destruction of the entire globe itself.

Or at least that’s what the hints dropped in last night’s episode have led me to believe.

There’s a darker feel to the show in this series. The intriguing darkness that was there initially at the show’s inception and then somehow got lost between the end of the first series and the start of this third has made a spectacular return. It’s back and it’s in a killer mood.

And I for one am glad that it’s back. The darkness really works for me. Save the cheerleader? Nah! Corrupt her. Twist her. Entertain us!

Tim Kring, my man, you just may have got me hooked once more.
Posted by Steve at Thursday, October 02, 2008
Email ThisBlogThis!Share to TwitterShare to FacebookShare to Pinterest
Labels: AliLarter, BBC, HaydenPanettiere, Heroes, sex, television

You're almost tempting me to give it another go.

No glib replies this time, Rol. It's definitely worth giving it a second chance. Would I lie to you?

Haven't watched it yet, but the series link was set AGES ago!

Sssshhh!! Don't tell me any more.

Don't worry Inchy, I know so little about what is supposed to happen it's impossible for me to give any spoilers...!

i was really happy to see this episode as well steve...last season sucked i thought...watched it all because i am OCD like that but didn't like it...i am actually looking forward to watching this week's episode instead of recording it and fast forwarding like last season...and i like the nikki/tracey character better...i like to see her strong and was tired of the crying crap...also what is up with the mom (i can't remember her name but she is the mom to the politics guy that is the cheerleaders father)...it looks like her character is starting to develop into something totally different as well...

I suppose it's too late to come in cold at Volume 3...I mean series 3? (I agree about volume. That's a book, and using the term is presumptuous - the equivalent of putting on a 'telephone voice').

Hi Daisy, yeah I don't know what it is about Nikki's character and powers but she's always been the one that intrigues me the most - even though her powers are dubious to say the best. As for the Petrelli matriarch - she's always had sinister undertones and I've long wondered just what precisely her super ability is... it was nice to finally get a hint of what she can do in this episode (something about being able to dream the future). It is interesting that they are warping some of the characters though - the future Peter is a lot darker as is the future Clare. But even Mohinder seems to have been injected with a little more vitality and dynamism. All to the good I say!

Hi Brother T - telephone voice; yeah I like that! I must admit, unless you're prepared to live with a few gaps it would be quite difficult to pitch in at this juncture!

omg i forgot about the mohinder part (and thank you for remembering the other names for me :)...i thought it was great how they did that...and i am intrigued as to where that will take his character...i don't know yet about the "future" characters...i am hoping they don't let that screw up the rest of the plotting...

I must admit, Daisy, I've got so use to Peter being the all round Mr Nice Guy it was a bit of a shock to see the darker version... but maybe a bit of discomfiture is a good thing? Especially if it keeps us watching to see how it is resolved?

Oooh yes that volume thing would have me hopping mad too - chucking cushions at the TV and all that.

Needless to say I have never watched Heroes. And I don't think you have convinced me that I should.

It gave me a bit of a start when I arrived here because I very nearly chose the same title for my blogpost today!

Hope you manage to have a good weekend. I plan to try although the weather forecast is dire.

Hi Gina - wow, great minds think alike, eh? I shall have to hotfoot it over to your blog to see what title you did use. I think Heroes is a bit like Lost - if you didn't see the first few episodes (as I didn't with Lost) you tend not to even try to get into it. However, for a piece of mid-week sci-fi it's pretty good and certainly knocks things like Torchwood into a cocked hat.

As for the weekend, our eldest boy has a couple of birthday parties to attend so Karen I suspect will be running around ferrying him all over the place. I've got a bit of web work to do... and sometime in-between all of that I hope to relax with Karen and unwind a bit after what has been a very stressful week!

I quite enjoyed the Heroes SERIES. Am glad it darkened again as I was really put off by the soapy shite!

Amanda, I second that!

to be honest i can't remember if nikki was in short shorts this episode (not one of the things i normally look for)...so i guess it is the plot i was listening to...lol

The serious TV reviewer in me can live with that! ;-)

Blimey, you can almost see what religion she is.

Amen to that, Laura! Notice that I am not making any naff jokes about entering her tabernacle.