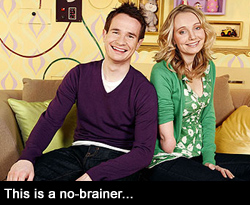 Knickers have been a little twisted in the UK this week over an issue which, quite frankly, has not merited the amount of column space given over to it.

And here I am adding to the word count when other bloggers have written about it at least half as well as I am about to (ha ha ha)...!

To clarify for my international readers: we have a kids channel here in the UK called CBeebies and they have employed a lovely blonde presenter called Cerrie Burnell to do the fill-in slots between the various kid’s programmes.

She’s warm voiced, gentle, enthusiastic, obviously a mum herself (you can just tell) and she was born with only one hand. Her other arms finishes just below the elbow.

Sadly a very small minority of “well meaning parents” (i.e. sentimental bigots) have written in to the BBC’s various online forums to complain that Cerrie’s physical differences could “scare” their young children.

My first reaction was to shake my head with pity that such small minded people not only exist in the world but are also polluting their own children with their xenophobic and ridiculously neurotic points of view.

But as the newsworthiness of this debate has grown with more and more press coverage and Cerrie herself being called in to take part in worthy “spread the message” interviews my pity has turned to exasperation and annoyance.

She’s a presenter and an actress doing a job like everybody else. Her physicality in this day and age should just not be an issue for anybody.

It’s certainly not an issue for my boys. I think Ben commented with vague interest once about Cerrie’s arm but didn’t really seem that bothered. As for Tom. He’s pretty much accepting of all that goes on around him and doesn’t see anything at all as “abnormal” or out of the ordinary. It is all new. All part of the adventure. And all entertaining.

If only our species could retain the mindset of a 16 month old baby... how much happier the world would be.

The only positive to come out of all this is, I suppose, the debate it has sparked and the huge wave of support that Cerrie has received from the majority of the population who are well balanced, intelligent, cogent and capable of coherent thought processes. As she says, if kids ask questions about her hand then just tell them the truth – she was born with it like many other people in the world and it doesn’t stop her from doing anything at all. It’s a good opportunity to try and educate them gently about such issues and nurture them into well balanced, emotionally sound adults.

I doubt that a single one of them will have nightmares about it... unless the parent completely mishandles the situation, of course... and that responsibility is hardly Cerrie’s or the BBC’s...

But it is a shame to have such a sweet, innocent children’s programme marred with such heavy-duty adult issues. But then again I suspect it is only us adults who are picking up on that anyway. The kids just want to get on to the cartoons and the fluffy puppets.

To my mind then, Cerrie’s only (to use an old 70’s word) handicap is her co-presenter, Alex Winters, who is so wet, bland and lifeless he looks like he spends his free-time taking part in Agatha Christie Murder Weekends playing the corpse. I’ve never seen a man on TV so damned dreary. It’s as if he’s constantly holding back, afraid to commit himself to the nursery rhymes or the baby talk in case his RADA mates see him and rip the pee out of him later in the pub.

If anyone is physically unable to do the job it is him.

As for Cerrie, she can read me a bedtime story and stroke my furry teddy any night of the week...
Posted by Steve at Wednesday, February 25, 2009
Email ThisBlogThis!Share to TwitterShare to FacebookShare to Pinterest
Labels: BBC, bigotry, CBeebies, children, childrensTV, complaints, disabilities, idiocy, kids, news

There are few things of more danger to the welfare of our children than "well meaning parents"...!

This had completely passed me by. How weird to have such prejudice in this day and age. She's good looking, slim, bright - from your picture anyway - and I thought all the vitriol and prejudice these days was saved for the 'fatties'.

This is utterly mental.

Hi French Fancy, it seems absolutely anyone can come in for the odd brickbat of two for how they look. It's all rather sad and ineffably tawdry. Sometimes, as a race, we really are very pathetic.

Unbelievable! I'd have thought parents would want their kids to see someone every day who despite a disability, has shown she can do and be anything she wants, what a role model!

I totally agree! What a cute girl and I would whole heartedly let my grandbaby Ella watch her. Some people just can't see beyond the end of their own noses can they?

I have a step-grandson (???) who was born with hands coming out of his elbow...actually, he only has a finger and thumb on one "hand" and a finger and one other finger on his other "arm". Both only start at his elbow.
He is an accomplished athlete (mind oyu, he is only 12 but already very tall and accomplished, got gold medals at the ParaOlympics for Children...)...bugger the well-menaing parents. Send the Children's Services round to their houses eh?

Exactly MissBehaving - and despite the few who complained I beleive that the BBC and Cerrie have been deluged in messages of support.

Sweet Cheeks, some people can't see very clearly at all and it worries me that these people are trying to guide children into the big wide world!

Good for your grandson - another good role model for people to have. I don't know about Children's Services, sometimes I think it would be quicker and more effective to send round a firing squad...

The Head of PE at my son's secondary school has a similar arm. And she manages fine. She does scare the pupils - but that has nothing to do with her arm - she's just a fearsome woman! it is good for the children to see that anyone can succeed at sport (or on TV) - inspiring I would say.

It seems to me that it is the parents who are most likely to give these children nightmares - just imagine the poor souls having to listen to their parents spout such crap.

Such parents should be taken away and put into care.

Great that she appears on a kids' programme.
Who knows - perhaps we'll have an ugly female on telly one day :)

Poor Alex Winters - He was born like it, you know...

Gina, my very thoughts exactly. When I hear about such parents spouting their rubbish to the young and impressionable it makes me wonder whether some kind of intellectual means test might not be a bad idea for those people wishing to bring children into the world... but then I curb my despotic leanings and go about my way as normal. ;-)

Kaz, Maggie Thatcher was on TV loads during the 70's and 80's and you don't get much uglier than that.

True Brother T, but on the bright side he's guaranteed a parking space outside most supermarkets and municipal buildings.

land freaking sakes.
talk about the well-meaning hitlerish minority needing a head butt.
that kind of carrying on makes me so angry X

because FLIPPING heck.
i s'pose anyone with glasses, hearing aids, five extra pounds, wrong hair colour, big feet, ad nauseam is excluded from the role too?
let's have a line-up of perfect people then.

man alive i am really upset over this, am gonna have to close your comment box before i overload it.

Kate, I hear and share your anger... and, rather consolingly, so did thousands of other people who all flooded the BBC with messages of support for Cerrie. I should imagine the whinging minority are hanging their heads in shame this morning... I certainly hope so anyway!