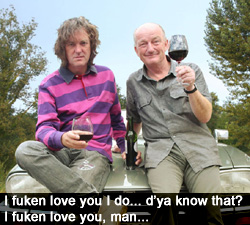 I’ve finally found the job for me.

A job that I not only want to do but am pretty sure that I could do.

The only fly in the ointment is that the post is already taken. By Oz Clarke and James May.

I’ve greatly enjoyed watching the last two series of their “Big Wine Adventure”. Series one saw them clodhopping their way across Europe, supping wine from every vineyard north of the Equator – and even dipping an inebriated toe into the wines of California. Series two they concentrated more on Great Britain and beer. Plainly more of the budget went on intoxicants than on air miles in series two but you can hardly knock the lads for wanting to reduce their carbon footprint.

They are an oddball pairing but one which seems to work. Oz yearns to educate the palate and mind of all around him while James' sole purpose in life is to pull the rug out from every wine-tasting oik that he encounters. The friction between the two is in the nature of friendly fire and is bizarrely entertaining.

Man banter I believe it’s called. And it works because the mentally adroit Oz Clarke is a secret lad at heart and the charmingly boorish James May is a secret Brainiac. They kind of fulfil both the best and the worst of each other in a boozy bezzy-mate man-on-man type marriage thing – only thankfully without any of the hanky-panky and sweaty-hairy stuff. Phew. I really don’t think their beer guts would allow such shenanigans anyway.

Basically the show is like a lad’s night out compressed into a half hour slot, with the bad language sanitized, the peeing over your own shoes glossed over and the embarrassing chat-up lines deleted... with the extra advantage that our heroes sup the poisonous brews on our behalf and suffer our hangovers by proxy.

Quite frankly it’s the best night out I’ve had in a long while and it didn’t cost me a penny. They even threw in a curry one week and you can’t say fairer than that.

Best of all each week I was home on time and wasn’t sick over the carpet / wife / cat / lava lamp.

Mr Clarke and Mr May were no doubt paid vast sums of licence payer’s money to “live the dream” for a couple of months while a temperate and Methodist film crew doggedly filmed their every move and ne’er touched a drop between them for the duration.

And let’s face it, the crew didn’t need to. May and Clarke must have consumed enough quaffables to completely submerge a south sea archipelago or three.

And I bet the BBC paid for all that booze. And the curry. And the petrol and the caravan they supposedly lived in. I bet May and Clarke didn’t have to dip into their own pockets for anything. Not even to spend a penny.

I mean bloody hell, how the hell do you get a gig like that? What qualifications do you need (aside from being already famous)?

I mean, I can drink beer. I can drink wine. And as for eating curry, well, I can do that with my eyes closed and my mouth open. Easy peasy lemon Brinjal.

And I bet I could sleep in a caravan with either James May or Oz Clarke without compromising my lad-hood to boot. I’m as qualified as the next man.

But I bet I’m a darn sight cheaper.

Come on, BBC. Give me a chance! I’ll even wear a ridiculously flowery shirt if you pay me nicely.
Posted by Steve at Friday, February 27, 2009
Email ThisBlogThis!Share to TwitterShare to FacebookShare to Pinterest
Labels: alcohol, BBC, beer, curry, drink, JamesMay, Karen, lads, lager, OzClarke, television, wine

LOL! You would be GREAT at that! Let me know if the Beeb sign you up....

I've been waiting by the phone all day, Justme, but do you think the damned thing has rung?! Not once! The Beeb ain't what it once was, I can tell you...

I shall write you a glowing letter of recommendation my good man! We'll get you into your dream job yet!

Crossing my fingers for you...
~SweetCheeks~

I agree, I enjoyed that series too. I reckon you could do a fantastic job! Nothing like a bit of "Bro-mance" eh?

I haven't seen the programme but I am happy to support your application particularly if we get to see the photos of you in the flowery shirt with your beer belly hanging over your trousers. Actually, maybe that wouldn't be so good . . .

Thank you, Sweet Cheeks, any kind of testimonial as to my TV-worthiness would be much appreciated.

Amanda, - ah, Bro-mance. That shall be watch word and I shall take every opportunity to drop into conversation at any possible interview at the Beeb. I'm sure it'll place my application in a much stronger light...

Chin up, I heard that Nigella's looking for a kitchen helper to stir her batter and generally tuck her bosoms back into her bra if they should come loose. I think you'd be ideal!

Maybe the Beeb would stop paying them to make shows like this... if you stopped watching 'em. ;-)

Emma, thanks for the tip off... my wrists are pretty flexible at the best of time so I should be able to mop up any errant mammary spillage without the cameras witnessing Nigella's norks dipping themselves into hot batter or a greased tin or, in fact, any oddly lubricated kitcken orifice.

Rol: and do myself out of a potential job? Plus, if I wielded that much power at the BBC, Emma's suggestion above would be on after the watershed every night of the week. Sadly, I don't think they're listening to me...

I'm sure your description is considerably more entertaining and higher in quality than this programme Steve.

And frankly I think you should set your sights a little higher than filling these two drunkards' boots or living a life by proxy through them.

Luckily I seem to have given up watching TV lately, except for the witty Candleford.

Ah Larkrise To Candleford how I love thee! I used to find Sunday nights faintly depressing - the inevitable return to work the next day - but Larkrise makes me look forward to Sunday nights now. You're right. I need to set my standards higher. Maybe I could play a drunkard who lives in Candleford?