Alice In One Eye Land 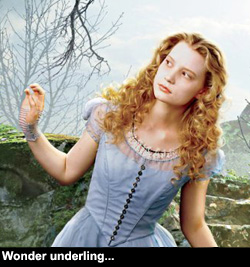 I put my modelling wages to good use on Saturday and took my lovely wife to the local cinema to see Alice In Wonderland (3D).We’re both Tim Burton / Johnny Depp fans so it was a foregone conclusion that we’d both enjoy the film and it didn’t disappoint. Sumptuous, rich, absurd, kooky. Exactly what is says on the tin. Burton was smart enough not to retell the original story but to craft an addendum to it that threw in the Jabberwocky for good measure. Helena Bonham-Carter was excellent as the Red Queen – I found myself thirsting to see her far more than Depp’s Mad Hatter (superb though his performance was).

Mia Wasikowska won me over as Alice. At first I just wasn’t sure. She wasn’t quite right but then – mirroring the film’s narrative (could be deliberate I suppose – doh!) she suddenly became Alice utterly and completely and I was convinced.

She also looked rather stunning in a suit of armour. Very, very arresting in fact. Yum. Eye candy that clanks. I think I could get into metal in a big way. In fact I’ve just bought myself a blowtorch and some goggles on eBay... but enough about my nefarious metalworking...

...what was special about the evening was that this was my first experience of 3D cinema (as we’d missed the boat with Avatar). With proper 3D glasses and everything.

I have to say it brought out the big kid in me. I was more juvenile than usual (which is saying something). I couldn’t resist putting them on before the film had started and looking around in wonder, muttering loudly, “Wow! They really work!”

What really gave Karen and I the giggles though was a fellow cinema patron who squeezed past us with his partner to get to their seats before the film started. As he shuffled by we heard him bemoan the fact that he probably wouldn’t be able to see the film properly as he could only see out of one eye...

You think? I realize that 3D glasses have come a long way from the red and green lensed cardboard contraptions of the eighties but I’m pretty sure the modern ones still need the viewer to have binocular vision in order for the 3D effect to work properly. Otherwise all you’re going to see is very fuzzy moving images which induce nausea rather than wonder.

And then very bizarrely there were numerous instances in the film where various characters had eyes plucked out... Call me cruel, call me callous, but it had me giggling even more. Old Mr One-eye must have thought that Mr Burton was having a real go at him. A personal attack of visionary proportions (if only he could have seen it properly).

But really, what kind of idiot goes to see a 3D film with only one working eyeball?

Poor poor Karen...all that clanking will keep her awake

Nota Bene: never mind that, our rusty tin opener has given me carpal tunnel syndrome...

The film was really just an extended chase sequence I thought...not that great apart from Johnny Depp

Still it was amusing for me being in the audience in a bit of a white trash cinema. The police came in and looked in a guy's bag who sat in front of me, then asked him to remove his shirt (why?) then they cuffed him and calmly took him out. Surreal!!

Emma: I'm guessing it was either an offensive tattoo or really offensive moobs... 'cos let's face it; there ain't nuthin' worse than nasty man-boobs.

Oh, I had no idea that the three-d glasses around now were not the little cardboard ones from my youth. I've yet to see Avatar and when I do it will be at home in the normal dimension.

I guess Mr One-Eye is used to his kookie vision - maybe he just fell asleep during the film.

I like you Stve. You are as mean and cruel as I am, and for me this is good! Loved Alice immensely and not only because I simply adore Johnny Depp. Ciao. A.

Eye'm looking foward to seeing it; as well as Avatar and a whole host of the other flicks that flit-flutter past faster and faster as time goes by. In fact, I'm more up to speed with the prepube movies these days - Up, Ice Age, Wall.E etc. Coming Monday we're off to see How To Train Your Dragon. Not complaining though - cinema is magic, yeah?

I didn't go with the boys to see Avatar but it hadn't occurred to me that there would probably be no point in seeing it in 3D as I also only have one functioning eye. Well, well.

I hate cinemas anyway as you know so I guess until 3D TVs become the norm I shan't have to worry too much.

So wicked of you though to be so eye-ist!

FF: no these were proper glasses... well, almost. Plastic frames, NHS style but they looked just like sunglasses (though the packaging informed us they didn't function as such)!

Lunarossa: I'm a nasty piece of work when I get going... but all in the name of comedy!

Joe: cinema is one of the few magics that are available to the average working man that don't cost the earth nor your health. Forget drugs - cinema is the escapist choice for me.

Gina: ulp! Eye-ist! I suppose I am. I don't know what I will do. Apart from using "I" at every available opportunity to make up for it.

Is it as good as you say it is? I like much of Burton's stuff (Edward Scissorhands, Mars Attacks, Sweeney Todd) but equally there is stuff which doesn't do it for me (Sleepy Hollow, Charlie and the Choc Factory). The Choc factory movie is case in point for me - Burton sure know how do the dazzling visuals but there's a hollowness at the core and lack of soul - the 1970s version may not have had the sophistication in terms of special effects, but Gene Wilder's Willy Wonka had so much more heart than Johnny Depp's weirrrrrd interpretation, I think and I blame that to a large degree on Burton. Is Alice better?

OC: I think it is. I share your ambivalence regarding Charlie & The Chocolate Factory. There was no charm to it; it was too dark. But with Sleepy Hollow I disagree with you - it's one of my favourites. I think he gets the balance right with Alice; it is scary in places but the humour undercuts that and the visuals are amazing (though I'm talking set design rather than the 3D - which was OK but for me didn't really add a great deal to my overall enjoyment of the film).

pffft.
i have monocular vision (am useless trying to catch a ball cos the focal point changes, depending which eye i'm looking out of. "one eye lookin' atcha, one eye lookin; FOR ya!" bwahahaha. i usually make peeps play with a compulsory pirate patch. yes i do.)
... but the last 3-d specs i wore totally worked!!!!!!!!!!
unbelEYEvable X

You are right about 3D not working without binocular vision. I have very VERY Lazy eye and it doesn't work for me - and neither do those magic eye picture books.

Katie: a compulsory pirates eye patch would totally sell it to me. I might be tempted to take a pair of tweezers to my own eye in fact...

Mark: those magic eye picture books totally annoy the hell out of me. I have never ever got them to work. I just end up with blurred vision and a significant amount of personal time lost to me forever.

I loved Alice too...

it was exhilarating and induced the feeling of cheeky monkey business that's for sure.

Robyn: and as we all know there's no business like cheeky monkey business!

Steve - Thanks for that. As always I respect your judgement so will endeavour to go and see soon! Probably over Easter...

OC: it's definitely worth the price of a cinema ticket!

Yo ! WHo ya calling idiot, buster ??? Watch out man, me an my buddy from the chips shop gonna come chop chop ! Jus cause I lose one eye in big prison fight, don't mean me's idiot... grrrrrr !

Half Blind Jack: you're nt fooling me - I know who you are, Willy Geenie!

I'm glad you liked it, we took the kids the evening it came out here (part of the Scowly Teen's birthday treat) and we enjoyed it even tho' I found the plot a bit weak - having said that I'm not sure what I was actually expecting!

Amanda: yeah the plot is a bit thin but the rest of it is so rich I didn't really mind.