Keeley, Why Didn’t You Call? 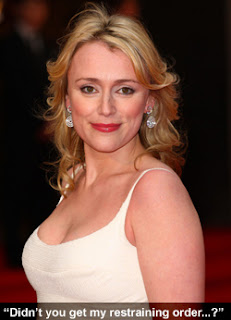 A week on and I’m still rather tearful.

My mobile phone has an unsightly crack in its display from where I threw it into the bin in disgust.

All bloody day I waited, checking the signal reception just in case I was in a communications blackspot or Vodafone’s spy satellite had been nuked by the Russians. But no. All was fine. The technology was functioning as it should. Like a well oiled machine in fact.

And talking of oil, I was oiled up too. Oiled up and waiting.

Was that the problem Keeley? Would you have preferred me dried and talced as opposed to oiled up like a centurion in a Roman bath house?

Well, you could have rung and told me. I’m amenable. I’d’ve bent over backwards for you (I’ve got the harness and everything).

You were in Leamington Spa last Monday and didn’t call me. Not once. I don’t dare show my face in Pizza Hut again after the fuss I made. She’ll be here I said. Any minute. You just keep that All You Can Eat For £6.59 Buffet open.

But 3 hours later they had to close and the only thing that had caressed my lips was a breadstick.

I don’t want to hear about shooting schedules; about how you were only here to film the external shots for the new up and coming remake of Upstairs Downstairs.

All I know is I’ve sung your praises on this here blog for the last 3 years and I thought we had an understanding.

I’m cut to the quick, Keeley. I’m now on an uneven keel and feel like I’ve been keel-hauled and not in a good way either.

Next time you want a pizza you’re on your own, baby. We’re done.

P.S. I’m free next Wednesday. I’m very forgiving. Just call me (I’m still on the same number; your lawyer probably has a record of it).

Doesn't she prefer Indian? I'm sure I read that somewhere... or was it an Indian? Either way, avoid Italian as well as Italians.

The Dotterel: I learnt that lesson of old. I just can't compete with their horrendously phallic pepper mills.

That settles it, Steve...once we can sell our house in a gendarmerie free zone of France, we have to have a pied a terre in Leamington
Spa...too much going on to miss out on it.

The fly in the web: apparently there's talk of Cannes moving here next year too.

Or was that a cannery? One of the two.

Your lips caressed a breadstick?? I'll bet she will feel such a ninny when she realises she had one digit in your number wrong and that's why you didn't answer her call.

Being Me: or some scally with a mobile phone number scarily similar to mine just had the lunch date of his life. Little git.

Misssy M: totally. But do you think her lawyers or the appeal court judge will listen?

"But 3 hours later they had to close and the only thing that had caressed my lips was a breadstick."Haaaaaa!!! Steve, you are one sexy dude. She's totally missing out.

Organic Motherhood with Cool Whip: you're telling me... and I didn't drop a single crumb. I'm pretty nifty with a stuffed crust too.

Hmm I'm sure I commented on this earlier, ah well. It was obviously the wittiest comment you've ever received and now it's out there, lost, forever!

I think she may have heard that you were just too hot to handle.

Very Bored in Catalunya: Blogger obviously ate your comment. I've half a mind to sue. As for being too hot to handle... she could have worn oven gloves, couldn't she?

Wan't she in "Tipping the Velvet"? Maybe she's not into breadsticks?

Trish: do you think she prefers focaccia? Or a nice big bagel?

I honestly don't think Pizza Hut is the place for a romantic tete-a-tete. Especially if you choose spaghetti.

I'm sure ypu'd have loved to have been upstairs, downstairs and in Keeley's chamber, Stevenage?

Who knows, if it's a hit, maybe she'll be back to film more exteriors. But I'm sure you'd prefer interiors...

I don't like La Hawes as a blonde btw. Much prefer brunette Keeley ... in fact 80s retro Keeley is even better.

Did she even ask your opinion as to whether or not she should go blonde? I'm thinking there might be a message in that particular bottle....

OC: upstairs, downstairs, in my nightgown... ooh definitely. Keeley seems to veer from blonde to brunette quite often and though I prefer brunette I'm not averse to a bit of blonde occasionally. Hypothetically speaking.

Amanda: I see it as a willingness too indulge in a spot of role play...

the flipin cheek of the woman! Honestly some people, they get a whiff of fame and suddenly they're too good for us normal folk. Tsk.

Heather: you'd think I'd've learnt by now, but no... Catherine Zeta Jones, Kate Winslet, Joan Collins, they're all the same. I don't know why I bother.

Same thing happened to me when Michelle Ryan was in town! She had my number!! Did she call? Nah!

I'll just have to stick with my memories of bumping into Billie in the shower!

TimeWarden: we really must double date... that way if we're both stood up again it won't be half as embarrassing...!

She was round at my place. Sorry

Nota Bene: she says your cooking is terrible.

You got your days wrong, it was Tuesday you were meant to get together, er, wasn't it?

LöstJimmy: now you tell me!

You have seriously dodgy taste in women....if you like blondes, what's wrong with Ann Widdicombe??

Curry Queen: she's a Tory. I was screwed by the entire Tory party in the eighties. They were all shit.

If yoiu ever get hold of her, please please remind her that I've got an appointment with her husband!!!! Ciao. A.

Lunarossa: hey - we could double date!

Certo, as long as I can have Matthew... Ciao bello! A.

When did she go blonde? You're welcome to her.

Rol: it's all the same in the dark.