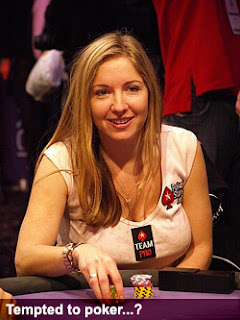 First and foremost I’d like to point out that this post is not just a lame excuse to publish a saucy picture of the fulsomely lobed (cerebrally, naturally) Victoria Coren. OK? I would never stoop to such transparent tactics.

Am I lying? Well, just look into my eyes and tell me.

You see, in my continued quest to ramp up my monthly earnings (and thus keep the wolves from my door) I have been reviewing all sorts of options to make a little bit on the side. To earn a little bit more. To acquire a little extra tin.

So I’ve been looking into the B list. The B list is made up of dodgy, cat in hell’s chance, money making ideas. TV competitions. Pub quizzes. The Lottery. Betting on the horses. And, finally, playing poker.

And it reminded me that some people – some quite high profile people like the blondesome brainiac that is Victoria Coren – make a decentish living playing poker. I used to think the poker playing world was made up of swarthy, cut-throat types who wear sweaty white suits and those weird green visor thingies to try and hide the look of abject constipation in their eyes but Victoria Coren (courtesy of Google Images) and, indeed, the BBC’s Hustle assure me that actually the poker playing fraternity is made up of honest-to-God salt of the earth types who might actually surprise you with their choice of University degree.

Therefore this could plainly be a viable career move. And I reckon I could pull it off. I mean, I can keep my face straight whilst screaming inside with the best of them (I’ve been a local government employee for nearly 14 years).

The only problem is I don’t know how to play poker. I have never learnt. Whenever poker games appear in James Bond movies I shuffle uncomfortably because I just don’t understand all that 3 pairs, royal flush, aces high bollocks. I’m just guessing that the rules are nothing like Snap.

But I think I would be rather good at poker nonetheless. Because when it comes to card games at least (not so good with sneaky Friday nights at the pub) I am a damn good liar. I can remember playing Liar Liar* as a young twenty-something and outfoxing everyone. (Liar Liar is the game where you have to get rid of all your cards by announcing you have, for example, 3 twos – you then put down your 3 twos face down. The trick, of course, is to put down 3 cards (or however many) even if you don’t have enough of the same numerical amount to make a grouping. If people call you – by saying Liar Liar – and you are proven to have lied you have to pick up ALL the cards that have been previously put down.) I was a natural and people would frequently miss when I had lied and mistakenly accuse me of lying when I had in fact told the truth – thus earning the forfeit themselves. God, what a card-sharp, I was.

Those were the days.

Pity we weren’t playing for money. Or playing strip Liar Liar with Victoria Coren... those photos would go down a bundle on eBay.

So anyway... I can lie like a barrister when I have a deck of cards in my hand. I just need to be taught the rules of the game.

Any poker aficionados out there willing to take on an apprentice? I’ll split my winnings 70/30? Come on, that’s got to be a good deal! Money for practically nothing!

interesting..... btw.... if I was straight mz Coren would be THE woman I would pick to date...... a delightfully sharp individual!!!

Oh Steve, how this post resonates with me right now. I have at least been reduced to selling stuff on Trade Me (NZ's answer to Ebay. But I think I might avoid the gambling and raise some good honest seedlings for the local market :-) But all this reminds me that when I recently checked with Blogger about earning from advertising, I realised that readers have to actually visit your ad site for you to earn from it. It doesn't earn just on the strength of visits to your blog. Is this right?
I had better start clicking on yours hadn't I. Good luck with all the cheating ;-)

There's a whole blogging community of poker players, including a Welshman who used to comment on my blog. He calls himself 'Rubbish at Poker', possibly out of modesty. As for Miss Coren, she probably tricks her opponents into believing that one pair beats a flush.

John: plainly then she is every thinking man's crumpet regardless of sexuality. Hopefully that will warm the sharp cockle of her heart!

Lady Mondegreen's Secret Garden: I've never "monitized" my blog via Blogger for precisely that reason - readers have to follow the ads for you to make any revenue. The ads (or ad) on my blog is different - I was approached privately and I am paid a flat rate every 3 months to keep the ad their, regardless of whether anyone clicks on it or not.

Gorilla Banana: I suspect her pair could beat a good flush out of my jack any day.

Do you sweat ? Because that is always a dead giveaway.

I am currently discovering how hard it is to eat a grapefruit in the same way as you would an orange.

Steve, I don't fancy your chances should you bump into Ms Coren.I believe the last blogger who commented on her physical attributes was chemically castrated.

I had a great deal of explaining to do to the wife.

Rather than poker what about "Happy Families"?

Could you not ghost write columns for most of the well paid columnists in the U.K. press? They could pay you a pittance of what they get and you'd still be well off.
You'll have to pitch it to them...they get total freedom apart from cashing their cheques (don't mention that the standard will be higher...they're sensitive plants.)

Met a bloke the other year - new partner to a friend of Jane's. What do you do? I asked, like you do.

Professional gambler , he replied, as if it were much the same as window cleaner. I thought, I bet nobody lets that pass casually in conversation.

Mind you, he was right prat - probably started off a banker too.

Keith: sweat? Like the fragrant Ms Coren, I perspire. But only when I've got a Royal Flush.

Marginalia: play Happy Families with Victoria. Hmm. Mrs Bunn in the oven? I think it might be time for me to cash in my chips.

The fly in the web: it's a tempting idea... but I'm not sure I could be that bigoted in my opinions.

Mark: I'd much rather be a professional winner. Professional gambler - in terms of an aspiration - leaves far too much to chance.

As cards go, I can't even win at Snap.

Tenon_Saw: I'm trying to make her jealous. It's all tactical I assure you.

You've had the perfect training of the ultimate poker face in that there job of yours. Just be sure and keep those single-raising eyebrows into line.

Do you watch Victoria Coren on 'Only Connect'? Brilliant quiz panel show thing and she is quite the school-marm, keeping the contestants in check.

Trish: indeed. I bet she'd look great in a cape and mortar board swishing a cane.

So did she call you ??? Curious bloggers want to know...

Owen: she did; apparently my bluff wasn't big enough for her.

Go for it! I can't teach you, but there must be someone out there who can!

Sarah: are you on commission from Gambler's Anonymous?

Only you could get away with that "poker" pun. Anyone else, I'd have called out the Carry On police.

Rol: June Whitfield already has me under surveillance.

In the same boat, I'd be crap at Poker tho!

I think you need balls of steel to play poker? Do you? I think of you as doing a side line in children's parties as an entertainer but that may be because of your jester avatar (yeah I know it's a pic from some haunted kids tv show) - I think you should try and revive Mr Punch with David Cameron as Punch and the Euro as 'Judy' getting a pounding ....geddit!!???

Emma: I think the analogy would work better with the Euro as Mr Punch and Cameron as Judy...