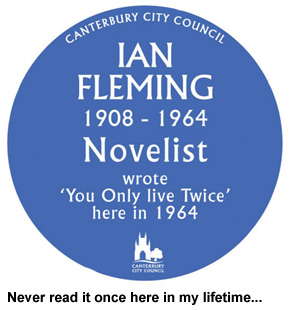 I want a blue plaque erected in my honour and attached to the wall of a house I’ve lived in or a pub I’ve drunk in or an alleyway I’ve relieved myself in somewhere in my home town.

Because – maybe it’s just Leamington – but there seems to be blue plaques being put up all over the place these days, to all and sundry for a whole raft of endeavours that, at best, often strain the bounds of remarkability and noteworthiness.

Lord Isambard Moolah invented the screw top salt shaker in this garret in 1846. Sir Ivor Permanent Backache invented skiving off from work in this bedsit in 1954. Captain Smartarse created the world’s first time machine in this domicile pod in 2539. Etc. Etc.

Forget Facebook or Twitter (or whatever it is you young un’s are using these days to avoid actually speaking to each other), a blue plaque is what you need if you want people to know who you are, to notice you and – most importantly – to remember you.

‘Cos being remembered is everything. If you die and nobody remembers you, well, that’s like you never existed. You were there but you were like dark matter... just holding the bright stars in their place. But if your name is still on people’s lips, still being bandied around backstreet pubs and used as a gross insult in the playground then you have at least achieved some kind or immortality. Future generations will carry your name forth like some kind of socio-biological seed and who knows? You may yet influence the children of tomorrow in some weirdly perverse manner which will either raise humankind to the heights of enlightenment or (more likely) see it damned to the lowest circle of hell.

But the fate of the species is unimportant compared with having had a hand in bringing that fate into being.

Because it doesn’t matter whether you’re remembered for good things or bad things. Just as long as you’re remembered. Fame doesn’t give a shit about morality. Fame doesn’t differentiate between top ten hit singles or the number of people you stuff into a mass grave. History enshrines Hitler and Michael Jackson both on an equal footing (though I know who I’d trust to babysit).

So all I have to do now is decide how I’m going to get my blue plaque.

Will it be for some kind of Nobel prize winning endeavour? Novel writing? Poetry? Blogging even? It would have to be arts based because I’m completely crap at science (if you’re waiting for me to invent a time machine you’d need a time machine just to cope with the wait).

Or shall I choose the dark path? Become a plague to my fellow man? Visit upon him sores and pestilence and endless irritation?

Blogging it is then.

P.S. Just make sure they spell my name right.

It may be a crumb of comfort to you that Thora Hird has just been turned down for a Blue Plaque.

Then again, it may not.

Blogging won't get you remembered, you've got to do something that makes a visual impact. Dye your beard green; learn how to play the flute; live amongst the badgers and make them your friends. For every 10 people who think you're a prat there'll be 3 who think you're an amiable ninny.

Isn't leaving our footprint on earth the reason why we have children or is that just to empty our bank accounts whilst we think about all the things we could have done that we would be remembered for?

Black Plaques: they turned down the sex goddess that is Thora Hird. Well I may as well give up the dream right now.

Gorilla Bananas: you mean become Bill Bailey? That's a step too far for any man.

Kelloggsville: I thought we had kids to take revenge on someobody for the upbringing our parents gave us.

I have not the slightest doubt that there will be in good time a blue plaque in Leamington to remember you by, and not just on some backstreet burly bum's urbrushed teeth...

Blue Plaque - what an ambition… Stephen Blake, sat in this house and inspired many daily through Bloggertropolis… Go Steve! :)

Owen: it'll either be a blue plaque or a large charge sheet at the local police station.

Hannah: that's the text sorted out... all I need now is the council to agree! ;-)

An old building in Melbourne has a lovely brass plague stating "nothing happened here" would that do :)

You work at the council don't you? Surely you can nip down to the printer at lunchtime and get yourself a blue plaque, write your own paper trail of approval and voila! Remembered permanently until someone knocks down the wall with your plaque on it!

You work for the council, don't you? Just fill out a form and get one knocked up then. Write what you like on it, find a suitable wall...it'll take many years for anyone to decide to take it down.

Vicky: I could wear that one attached to my forehead.

Amanda: use the council's printers and photocopiers for my own uses?! Perish the thought!

Trish: a surefire way of getting absolutely nowhere fast is to fill out a council form.

Can I just say I had no idea about The Sagittarian's comment before I posted mine. I didn't copy, honest.

just curious - which of them WOULD you choose to babysit?

Hang on. Hang on. That plaque is from Canterbury. Did you steal it? If the worst comes to the worst, I suggest you mount a blue willow pattern plate above your front door.

Nota Bene: blue willow? Nothing so fancy. The best I could do would be an Elmer The Elephant plate.

Or those who follow your blog could put up blue plaques on their houses....Bloggertropolis was read here.....

The fly in the web: now that could lead to some very interesting landmarks around the world... not to mention a few places locally too.

I need a pillow named after me because I do so much sleeping...

About Last Weekend: buy me an embroidery kit and I'll see what I can do...

If I could vote on my favorite blogs, I would surely vote for you. I love the names you've given to your imaginary blue plaque winners! (at least i think they are imaginary) Cheers to you, Steve. Keep on blogging.

Femminismo: why thank you. And yes, my blue plaquers are all fictional, alas. But that just means there's still an opening in those fields...!

I did not know that, Vicky - heh! I love my home city even more now.

And I like the Fly In The Web's idea. I'd do that proudly. Send me a blue plaque, Steve. I know just where to stick it.

Being Me: I'm sure me of my colleagues would say the same... though with a more negative inflection...!

One of my favourite lines (by Lily Tomlin) from one of my all-time favourite movies.... did you pick it? "9 To 5"!

Being Me: is that "9 To 5" as in Dolly Parton? Know of the film but never seen it. Another gap in my filmic education!

I bet there's a market stall somewhere that specialises in fake ones?! If not, I think there should be...maybe I've found the key to making my millions!

Suburbia: careful you don't end up on Rogue Traders...!